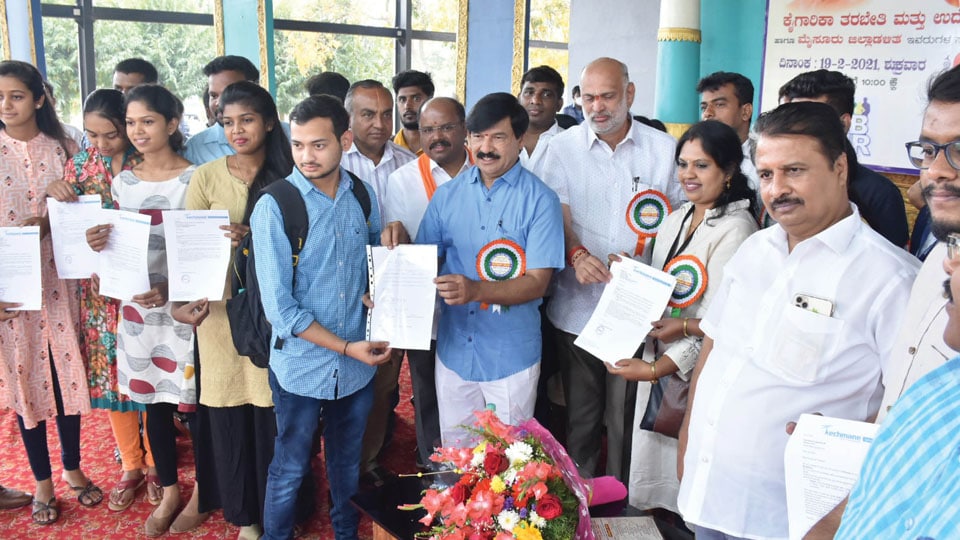 Mysore/Mysuru: As many as 10,000 jobs in 110 companies are up for grabs at the ‘Job Mela’ being held at Dasara Exhibition Grounds here this morning. The Job Fair is held under the aegis of District Administration, Model Career Centre, District Employment Exchange, Department of Industrial Training and Employment, Skill Development and Labour Department. The event was opened for candidates starting from SSLC, PUC – pass or fail, graduate, post-graduate, diploma and all disciplines of engineering course (18 to 35 years).

Speaking after inaugurating the Mega Job Fair, Labour Minister Arbail Hebbar Shivaram said as many as 110 companies are participating in today’s Fair to offer 10,000 jobs.  After one year of COVID-19 pandemic, situation was slowly limping back to normalcy. Thousands of people lost jobs during pandemic. Now, the companies were slowly opening up due to intervention of Labour Department. Hitherto, women were allowed to work 24×7 in software companies but this rule has been extended to other sectors too, he added.

The Minister said Karnataka was known as a most conducive place for industries due to better understanding between employees and employers. However, it was unfortunate that Toyota Company near Bengaluru has been closed since last three months due to differences among administration and employees. Efforts were being made to broker peace between them, he said.

The Labour Department has made it mandatory for the companies to extend Provident Fund and ESI facilities to employees. At the same time, the employees must be loyal to their employers and work with dedication and hard work.

MLA S.A. Ramdas, who has organised this Job Mela, said the recent ‘Yogakshema Yatra’ held in his K.R. Constituency revealed that many people had lost jobs during pandemic. Of the total 62,000 houses that he visited, more than 95 percent of families wanted jobs. This made him to think of holding a Job Fair for jobless. Job aspirants must attend interviews of two or three companies for better prospects. Those who have failed to secure jobs must register their names afresh after today’s fair. Such candidates would be imparted skill training to make them employable, he added.

On the occasion, Labour Minister Shivaram handed over letters of appointment symbolically to a few candidates. Senior officers from various Departments were present.