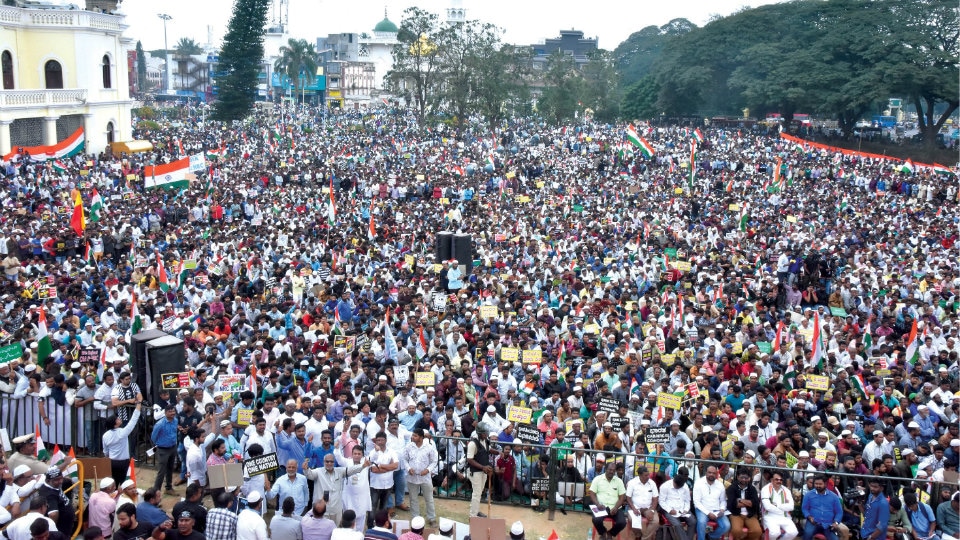 Mysuru: The Town Hall in the heart of the city was a sea of humanity this morning as over 10,000 people, majority of them from the minority community, assembled at the venue to stage anti-CAA  and anti-NRC demonstration organised under the banner of Mysuru United Muslim Welfare Trust. Various other organisations such as DSS, University of Mysore Research Students Association too took part in the demonstration.

Trust President Mufti Syed Tajuddin, under whose leadership the demonstration was held, said that although the Citizenship Amendment Act (CAA) was enacted with a lofty principle of granting shelter to persecuted people, the Act is flawed in that it is based on religion.

Claiming that the Act has deliberately left out the minority Muslim community, he said that the community and other secular minded people of the country vehemently oppose the CAA as well as the proposed National Register of Citizens (NRC) as they were discriminatory against the minority community. Terming the CAA and NRC as unconstitutional, he maintained that a majority of Muslims will lose their citizenship and will be interned in the detention camps already being set up in some States.

Tajuddin said that a memorandum will be submitted to the Deputy Commissioner, opposing the implementation of CAA and NRC.

The protestors, who carried the National Flags, held placards that read ‘We Indians stand against NRC and CAA’, ‘We reject CAA, we reject NRC’ etc., and raised slogans against the BJP-led Government at the Centre.

The Police had made elaborate security arrangements in and around the Town Hall, deploying a posse of Policemen, 10 KSRP Batallions,15 CAR platoons and Mounted Police. Every person entering the Town Hall was checked by the Police at the entry gates as a security measure.