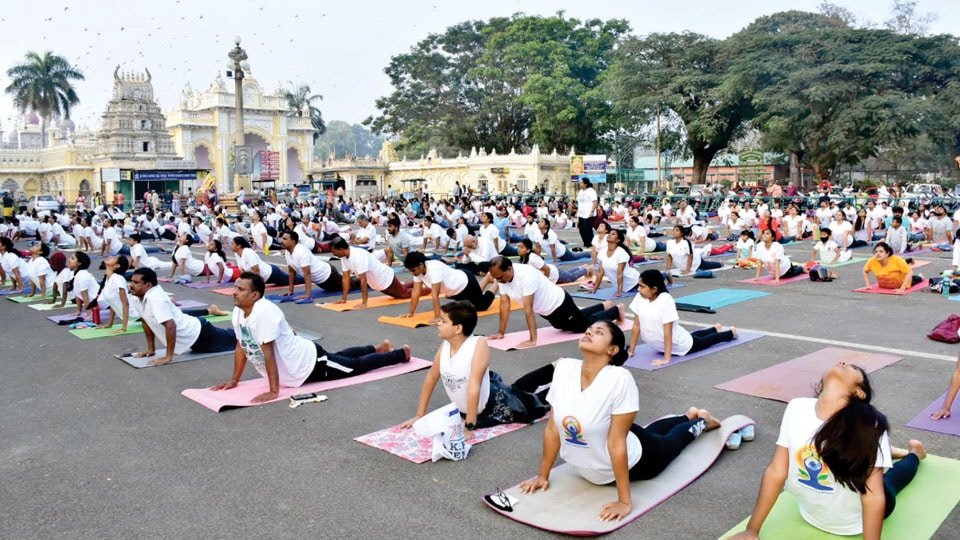 Mysore/Mysuru: More than 500 Yoga enthusiasts of the city took part in the Mass 108 Surya Namaskara and Surya Yagna organised by Mysore Yoga Okkuta as part of Rathasapthami in front of Kote Anjaneyaswamy temple early this morning. The event also marked the 20th anniversary of Mysore Yoga Okkuta.

Yaduveer Krishnadatta Chamaraja Wadiyar inaugurated the event by offering prayers to the portrait of Bhagavan Suryanarayana (Sun God) followed by lighting of the lamp.

Speaking on the occasion, Yaduveer reflected on the close association that Mysuru has with Yoga for decades. Pointing out that the erstwhile Mysore Maharajas promoted Yoga, he said that Nalwadi Krishnaraja Wadiyar was instrumental in making Mysuru one of the top Yoga centres in the country.

Noting that Nalwadi gave shelter to Yoga Guru T. Krishna-macahri in the Palace, he recalled that renowned Yoga exponents like  BKS Iyengar and Pattabhi Jois were tutored by Krishnamachari.

Highlighting the benefits of practicing Yoga, Yaduveer said that Yoga is vital in relieving mental and physical stress in the current  stressful life. Asserting that Yoga is essential for all in today’s mechanical and demanding  life, he said he was happy that the Surya Namaskara event received good  public response.

Rathasapthami is a Hindu festival that falls on the seventh day (Saptami) in the bright half (Shukla Paksha) of the Hindu month Maagha. It is symbolically represented in the form of Sun God Surya timing his Ratha (Chariot) drawn by seven Horses (representing seven colours)towards the Northern hemisphere, in a North-easternly direction. It also marks the birth of Surya and hence is also celebrated as ‘Surya Jayanti.’

Rathasapthami is also symbolic of the change of season to Spring and the start of the Harvesting season. The festival is celebrated across the country  in all temples dedicated to Surya.

Marking Rathasapthami, the  idols of the deities at all the 23 temples in the Palace premises were brought out and arranged together in the Northern direction of the premises. All the idols were specially decorated and special pujas were performed  in keeping with the traditional and customary  rituals that has been in practice for decades.

Hundreds of devotees from across the city visited the Palace and offered prayers to the idols of the deities on this special occasion.