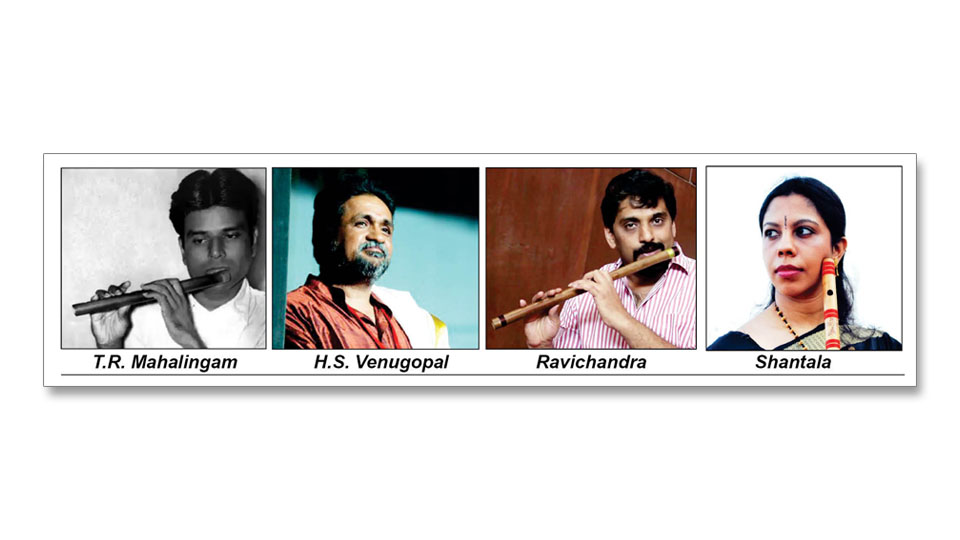 Padma Shri T.R. Mahalingam (Flute Mali) Samsmarana Concerts have been organised at Sri Nadabrahma Sangeetha Sabha on JLB Road in city on May 29, 30 and 31 at 6 pm everyday. The concerts are sponsored by Flute Mali Samsmarana Vedike and Sri Tyagaraja Sageetha Sabha.

The first programme on May 29 is a flute concert by H.S. Venugopal. He will be accompanied by Veena Suresh on violin, H.L. Shivashankaraswamy on mridanga and M.R. Manjunath on ghata.

Next day, on May 30, a flute concert will be presented by Ravichandra Kulur, who will be accompanied by N.N.Ganeshkumar, K.U. Jayachandra Rao and S. Manjunath.

Final day on May 31, ‘Venu Brahma’ title will be presented in honour of Flute Mali to G. Raj Narayan. The Felicitation programme will be followed by a grand flute recital by Shantala Subrahmanyam. Aditi Krishna Prakash, Jayachandra Rao and Bhargava Halambi will support her on violin, mridanga and kanjira respectively.

And as an accompanying artiste, he has accompanied most of the reputed artistes in various dance forms like Bharatanatyam, Kathak, Mohiniyattam, Kathakali, Kuchipudi, Yakshagana, Kavya Vaachana etc.

The annual dawn to dusk cultural extravaganza ‘Kalaarnava’ organised by HSV has become one of the most celebrated music festivals in town.

His father, Prof. K. Raghavendra Rao was a respected flautist at the time. Regularly practicing under his father’s guidance, Ravi started performing duets with his father and even held solo concerts. During his days at college, Ravi developed a keen interest in other forms of music, experimenting with fusion and world music and discovering Jazz and broadening his knowledge of classical music to include Hindustani classical as well as Karnatak.

After completing his Bachelor’s degree in Electrical Engineering, Ravi worked for few years all the while nurturing his classical flute-playing and in 1999, he decided to take up music professionally.

His playing field also includes the Bansuri (North Indian flute), western flute and the wind midi controller, kanjira and vocal percussions. No wonder he has been recognised and invited by legendaries like Pandit Ravi Shankar to join him for concerts titled ‘Festival of India III’ in the year 2005-06. He has extensively toured across the globe for his solo, duets, fusion, jazz concerts and dance productions. Ravi is an ‘A’ graded flautist from AIR and Doordarshan.

It was also her good fortune to be trained by eminent performers — vocalist late Vairamangalam Lakshminarayanan and is currently pursuing vocal music training under O.S. Thyagarajan and T.V. Gopalakrishanan.

Shantala has graced the stages of many reputed organisations and in recent years is a frequent visitor to Europe, USA, Canada, England, Ireland and Malaysia for concerts, workshops and lec-dems. She has given master classes in Karnatak music and rhythms in University of Gothenburg, Music Academy OSLO, Royal College of Music – Stockholm. Shantala is also a sought after teacher. She has been imparting training in South Indian vocal music, flute playing and reciting kunakkol [vocal rhythm] to scores of students from India and across the globe.