Can storied urn, or animated bust,
Back to its mansion call the fleeting breath?
Can honor’s voice provoke the silent dust,
Or flattery soothe the dull cold ear of death?
—————-
The boast of heraldry, the pomp of power,
And all that beauty, all that wealth, e’er gave,
Await alike th’ inevitable hour.
The paths of glory lead but to the grave…
– Thomas Gray, Elegy Written in a Country Churchyard

There was one more reason for me to make this second visit to Paris. That was to visit the Pere Lachaise Cemetery in Paris. It is where JRD Tata was buried after he died in Geneva, Switzerland, on 29th November 1993 at the age of 89, of a kidney infection.

India has had a number of French connections but the one it has had through JRD Tata is epoch-making. About it later.

Another French man with India connection who comes to mind is that great French savant and intellectual Romain Rolland. It was he who introduced the two famous Indian Hindu spiritual persons to the world. Those two are Ramakrishna Paramahamsa and Swami Vivekananda. But for Romain Rolland, a Nobel Laureate, writing a book on each of these spiritual leaders, they would, probably, have remained known to only India and probably Vivekananda to America also.

The Life of Ramakrishna Paramahamsa and The Life of Vivekananda are the books that introduced these two Hindu spiritual masters to the world at large in a way the world acknowledged the spiritual teachings of these two masters. There was also another French connection to India. It was through Tipu Sultan the ruler of Mysore, who tried to befriend French to fight the British without much success in 1796. In fact, the French first came to India in 1668 and  later in 1673 set up the HQ of the French East India Com- pany at Pondicherry.

However, India owes much to France because it gave India JRD Tata, an extraordinary person — an aviator, a visionary entrepreneur, Chairman of Tata Group of industries and business and a shareholder of Tata Sons, the flagship company of Tatas.

JRD Tata, first name Jehangir, was born on 29th July 1904 into a Parsi family of India settled in Paris. Father R.D. Tata was a notable businessman married to a French lady Suzanne Briere, famous as the first woman to drive a car in India! And her son JRD Tata was the first licenced pilot in India! His father R.D. Tata was the first cousin of India’s pioneer industrialist Jamsetji Tata — the founder of Tata Iron and Steel Industry in Jamshedpur. Interestingly, JRD Tata’s niece was the wife of Muhammad Ali Jinnah, founder of Pakistan!

Be that as it may, a citizen of France, JRD Tata had to enlist in the French army and serve for one year period of conscription. Soon after coming out of the French army, his father sent him to India where he joined the Tata Company renouncing his French citizenship in 1929 and became an Indian citizen.

In 1938, at the age of 34, JRD Tata was elected Chairman of Tata Sons making him the head of the largest industrial group in India with 14 enterprises. But when he left its leadership in 1988, half-a-century later, he had left behind 95 enterprises — some are TCS, Tata Motors, Titan, Tata Tea, Voltas, Air India…

When I went to Bombay in 1964 looking for greener pastures, I was told of the pivotal role TATA company played on one’s life in Bombay. Get up in the morning, turn the tap, it is water supplied by TATA; the cooking gas from the tap comes from TATA; take bath, the hot water comes with TATA electricity; the bathing soap comes from TATA; take breakfast, oil and sugar, come from TATA (now coffee and tea as well); dress up to go to office the cloth for your clothes comes from TATA; get into BEST city bus for travel, it is from TATA; match box, hair oil… no end. TATA products touched every individual’s life not only in Bombay but also in India. Now, despite there being other competitors, TATAs continue to surround us. That miracle was the work of JRD TATA.

A grateful nation, India, honoured him with two highest civilian awards — Padma Vibhushan (1957) and the ultimate honour Bharat Ratna (1992). He was also awarded the French Legion of Honour by the French Government in 1983. And as destiny would have it, he was buried in a city, Paris, where he was born. And I wanted to visit his grave.

JRD Tata, as I mentioned earlier, was buried along with his family members, at one of the biggest and famous cemeteries in Paris — Pere Lachaise Cemetery. Situated at the suburbs of Paris, it is the first garden cemetery run by the municipality. It is also the site of World War I memorials. The famous British author Oscar Wilde was buried here — remember when Wilde went to America he was asked at the customs what he had to declare. Oscar Wilde answered: I have nothing to declare except my genius !

Well, America then had not schemed to bring in ideas like “intellectual property,” so there was no customs levy !

We took an underground train to reach this cemetery which was already having its early morning visitors, most of them tourists like me. Each year the cemetery receives nearly 35 lakh visitors, said to be the most visited cemetery. It’s so huge, 110 acres and yet it is ‘house-full’ and naturally there is a waiting list. Wonder if new, virgin plots are available. Since my son Vikram Muthanna had already visited JRD Tata’s grave a year ago it was easy for us to visit this grave right away.

The graves range from a simple, unadorned headstone to towering monuments, including mini chapels! Some tombs look like the old British telephone booths. There is hardly any space for mourners to step inside, kneel and pray. Many just leave flowers, stand, pray and leave. As there is very limited space to spare for the ‘late comers,’ the cemetery manages to squeeze bodies into crowded space and one way was by combining the remains of multiple family members in the same grave. So, Tata family grave also is managed this way, I guess (see picture). 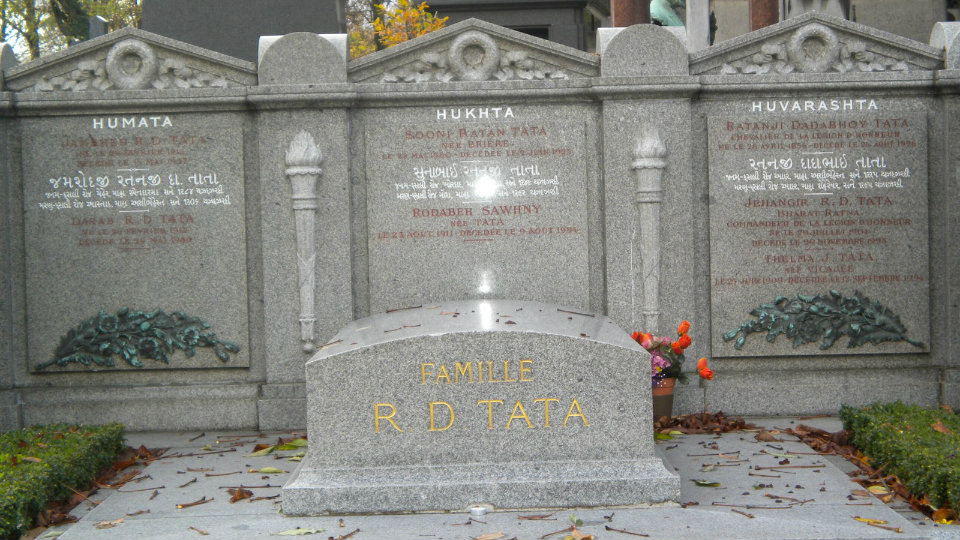 Fortuitously, it is convenient for visitors for they see the TATA family all in one place instead of getting into an expedition of finding each departed TATA in that crowded vast area of the cemetery. Standing before the grave I thanked TATA for making our life in India comfortable and wondered how many honchos working in TATA companies have paid respect to the TATAs at their grave in Paris.