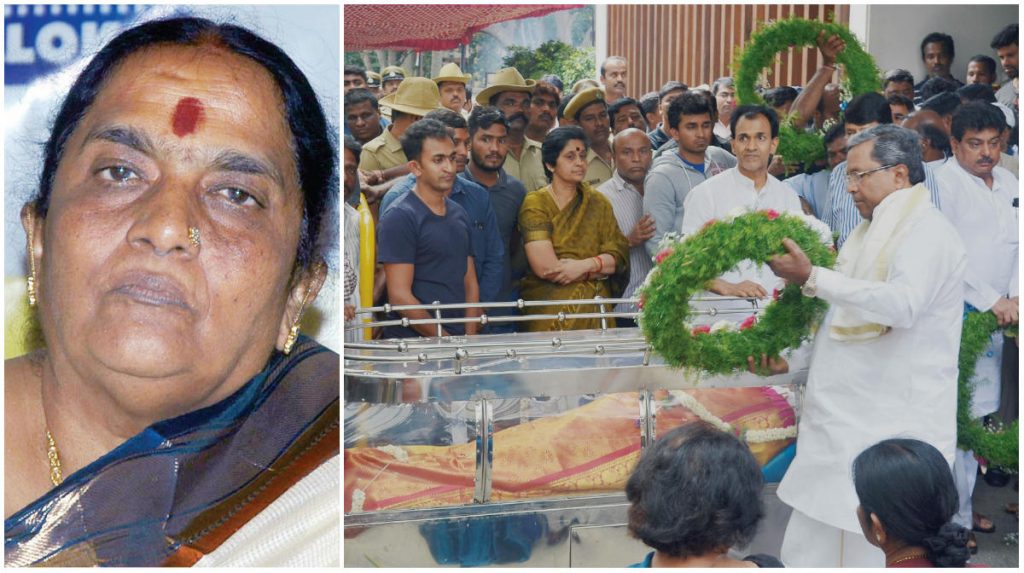 Bengaluru: A pall of gloom descended over the Kannada Film Industry this morning as Dr. Parvathamma Rajkumar, veteran film producer and wife of the late legendary actor Dr. Rajkumar, passed away at 4.40 am. She was 78.

Parvathamma had been admitted into the Intensive Care Unit of MS Ramaiah Hospital in Bengaluru on May 18 with kidney-related ailments and respiratory problems. According to Dr. Naresh, who was treating Parvathamma, she died due to multiple organ failure and did not respond to the treatment.

Parvathamma’s eyes have been donated to the Narayana Nethralaya, as per her wish. Her body was shifted to the Rajkumar residence in Sadashivanagar in Bengaluru for the family members and the people to pay their last respects.  Her last rites will take place at 6 pm at Kanteerava Studio, beside the samadhi of Dr. Rajkumar.

Known as one of the pillars of the Kannada Film Industry and a patron of many of its artistes, Parvathamma’s death has been condoled by many and messages have been pouring in from all quarters.

In Mysuru, the morning shows in all theatres and multiplexes were cancelled and in Bengaluru, the  film industry stopped film shootings and exhibition for a day, as a mark of respect. 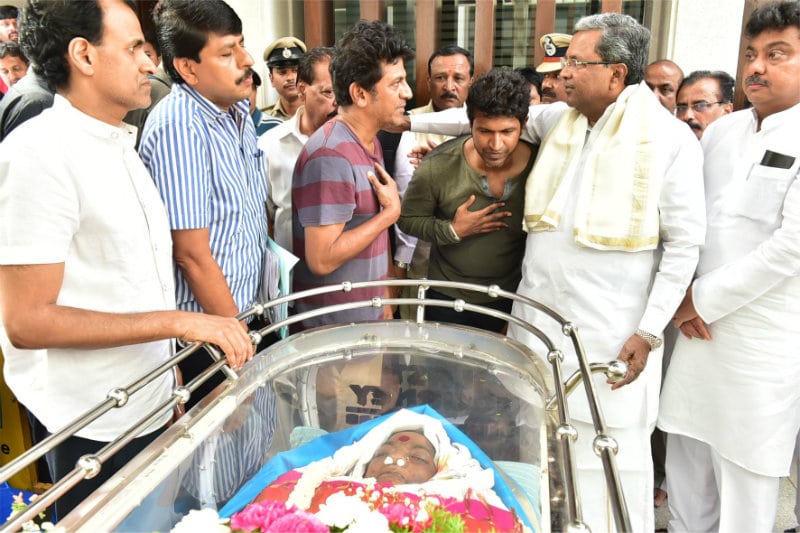 Initially, the family decided to place the body at Poornaprajna School Ground for the public to pay their last respects but later decided to keep the body at the residence itself. Following this, security to the house was beefed up and over 300 Policemen were deployed to maintain order.

Congress leader M. Mallikarjuna Kharge said: “My family and I are in grief. Living in the same locality, we would often meet, speak and share joys and sorrows. She looked after everyone like a mother. If anyone came to their house, or if she went to someone else’s house, she would speak and behave with utmost kindness, ensuring never to hurt anyone. She has been a highly successful producer and a patron to many actors, and an example to all women.”  Mysuru-Kodagu MP Pratap Simha too has condoled her death.

Speaking to reporters, actress Prema said, “I’m speechless, I have so many memories with her. She had the commanding ability to guide actors and a keen eye for talent. I don’t know how to react to this.”

Actor Yash said, “It was due to her tireless effort that the Kannada film industry is in the place it is in today. She was an inspiration to us all.”

Many in the industry spoke of how Parvathamma Rajkumar not only taught them a lot about the profession, but also about treating people with respect, kindness and generosity.

Actor Pooja Gandhi said, “It is very sad for the Kannada film industry. I had some issue somewhere and I didn’t know where to go. I went to Parvathamma and she embraced me with all her warmth and stood by me. It’s not easy to become a producer as a woman. In that era, she stood and produced so many films. It’s not easy. She is an inspiration to me and other women who are looking at production as a career.”

Former Chief Minister S.M. Krishna has expressed his grief over Parvathamma’s demise. “They say that behind every successful man there is a woman and Parvathamma is a shining example for it. She was a very strong lady and I have seen her through one of the most difficult times of her life which is when Veerappan had kidnapped her husband Dr. Rajkumar for 108 days,” he said.

“On the day of kidnapping, she called me from Mysuru and I told her to come home in Bengaluru. From that day until the day he was rescued, Parvathamma and I were in constant touch everyday in efforts to bring back Dr. Rajkumar. That was when I realised she had a will of steel. I am extremely saddened by her demise,” he added.

3 COMMENTS ON THIS POST To “Parvathamma Rajkumar passes away”