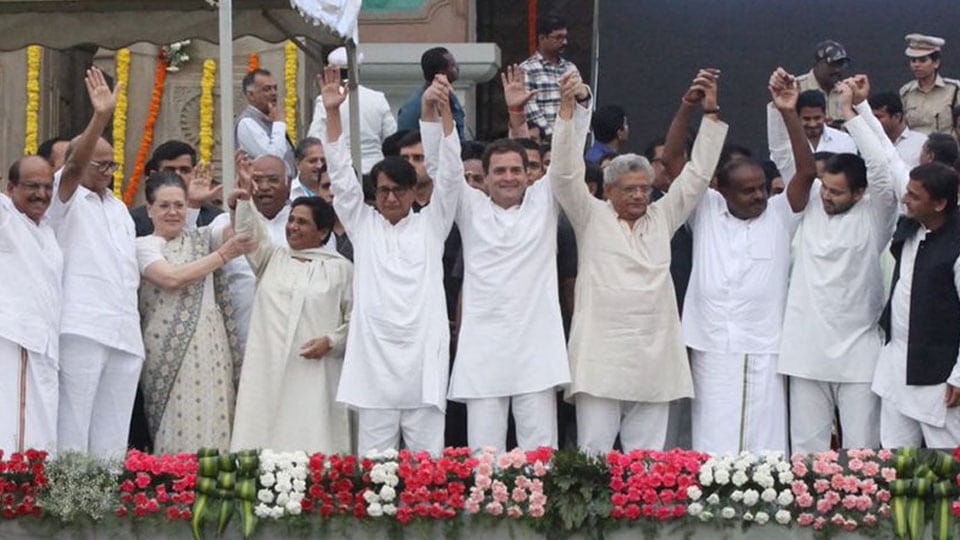 Going by the latest political developments in our State, somehow I feel that my musings written in this same column on May 15, 2018,  under the title ‘Pride goes before the Fall: Musings on Congress defeat in Karnataka’ literally fits to present political scenario.

Considering the current political unrest and the blame game that has been going on, one can certainly come to the conclusion that the poisonous seed had already been sown on the day the coalition Government was formed. After the results of last Assembly elections were out, the BJP with 104 seats emerged as the single largest party. Congress got 80 seats while JD(S) got 37, BSP one and two independents.

To capture power, the BJP was just short of 9 seats. BJP even thought that somehow they could garner those numbers and form the Government and hence met the Governor. A laid-back BJP might have thought that Congress and JD(S) would never come together to form the Government after the election as they had not formed a pre-poll alliance. Even the Governor gave them a chance to form the Government by instructing them to prove the majority in 15 days’ time. But leaders of Congress and JD(S) did not want ‘communal’ BJP to rule the State at any cost and amidst the allegation of horse trading knocked the doors of Supreme Court. They thought that if more time is given then it will give them an opportunity to buy their MLAs.

Even as this was not an issue of national importance or a frightening scenario, Supreme Court took the case for an unprecedented midnight hearing which went on till wee hours and instructed B.S. Yeddyurappa, who had already taken oath as Chief Minister, to prove the majority within two days.

Many a time, as cunning gets upper hand over those who are clever, unable to prove the majority, within two days Yeddyurappa had to step down from the throne.

Waiting for such an opportunity, Congress sewed up a post-election alliance with JD(S) at a lightning speed but left Chief Minister’s post to JD(S) and surrendered themselves to JD(S).

In fact newspapers reported that considering more number of seats the Congress had won, Deve Gowda had suggested Mallikarjun Kharge’s name to the post of Chief Minister from Congress. But the High Command didn’t agree. I don’t know why. And now we can see the consequences. Ironically, even today, former Prime Minister Deve Gowda is very vocal about Kharge’s name for CM’s post.

Now, people of Karnataka should blame Congress High Command as the main culprit, not its State leaders, for the current unstable and unsettling state of affairs in Karnataka’s political scene. During the election campaign, former CM and now the Co-ordination Committee Chief Siddharamaiah might have repeatedly said ‘I will be the next CM.’ There is nothing wrong with such a desire.

Even now, Deve Gowda is putting the onus on former CM Siddharamaiah. No wonder Deve Gowda is saying he feels party workers are of the opinion that Siddharamaiah is responsible if the present Coalition Government topples because he is behind the resignation of the MLAs. For this reason, former PM Deve Gowda has categorically rejected the claim by some dissident Congress MLAs that Siddharamaiah should be again made Chief Minister and there will not be any threat to the coalition Government. Deve Gowda is very firm about Kumaraswamy to continue as CM for the next five years as per the deal with High Command.  In such a scenario, no wonder this Coalition Government won’t long last whilst most of the Congress dissidents are least bothered about survival or collapse of the present Government.

Here I reproduce the excerpts of my Abracadabra that I had written on May 15, 2018, which prophesied the present political scenario with an apt quotation by Hermann Hesse.

The man of Power is ruined by Power. The man of Money by Money. The Submissive man by Subservience. The Pleasure-seeker by Pleasure. — Hermann Hesse , Nobel Laureate for Literature

As I watched the Karnataka Assembly elections 2018 results this morning on TV, I could not help but recall the words of Hermann Hesse quoted above. If Congress could not win this election, despite there being not a very conspicuous anti-incumbency factor common in democratic elections, the only one person who should be held responsible is Chief Minister Siddharamaiah himself. His audacity, arrogance of power, the hubris and a very sarcastic and despicable language — remember the word he used in accepting a challenge in elections? ಅವರ ಅಪ್ಪ ನಿಂತರೂ ನನ್ನನ್ನ ಸೋಲಿಸಲಿಕ್ಕಾಗೊಲ್ಲ [Even if his father contests, I can’t be defeated]. These words were recalled by Shobha Karandlaje, BJP MP, this morning on TV9 while giving her reaction to BJP’s winning streak as I write this.

After seeing the results, I felt if only Siddharamaiah was a little gentle in his demeanour and refined in his language in the last five years, he would have become an acceptable CM like earlier CMs of Karnataka to a large majority of people. Added to this, if he had taken a Dalit as a Deputy Chief Minister, as demanded by the Dalits, I guess Congress would have even won comfortably this election like in 2013. Sadly, Congress High Command is so weak, everybody in Karnataka Congress was more afraid of Siddharamaiah than Rahul Gandhi or even Sonia Gandhi. No wonder, the Congress has to trail behind the BJP in 2018.

I have seen Prime Ministers and Chief Ministers since 1947 because when India got independence I was seven-years-old. Prime Minister Jawaharlal Nehru was an ideal leader, a role model in speech and action. Then Lal Bahadur Shastri, another sage-like politician. And then Indira Gandhi, a tall leader indeed. Sadly, later we had some pygmies who did not last for more than a year in office. I won’t name them for I can’t even remember their names.

Rajiv Gandhi was a quick learner, who carried himself with great dignity and grace, except for surrendering to the minority (to the point of surrendering the sovereignty of our Constitution), which he misused with his brute majority in the Parliament like his mother did in 1975 — Emergency days. All the same, he was an acceptable, admirable LEADER, whom the nation loved. Sadly, his son Rahul Gandhi, National President of the Congress Party and a future Prime Ministerial candidate as he himself had declared, negating the principles of democracy, is an apology for a leader. His weak leadership is cause for Karnataka Chief Minister Siddharamaiah’s strength. It looked to me like the last days of Mughal Empire. And with this election, the inevitable has happened. Good for Karnataka and good for the country.

7 COMMENTS ON THIS POST To “Pathetic plight of Coalition Govt.”