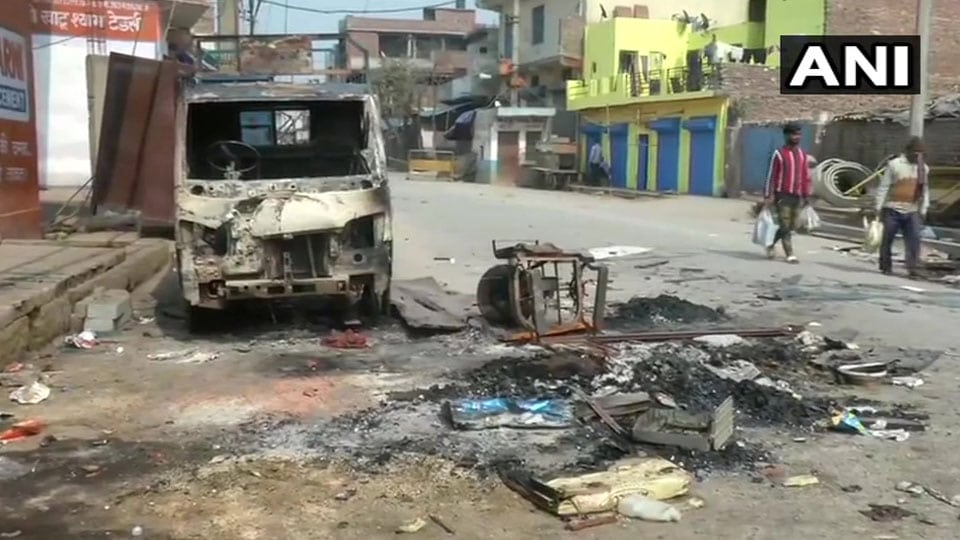 The hills are alive with the sound of slogans.  We’ve sung for a thousand years Inquilab Zindabad.  The heart still wants to sing Hindustan Hamara. The halls fill the soul with the sound of Jai Hind, now said at the end of every speech. Above and beyond all this has emerged a new call that puts fire into our hearts.  It’s a call that works on the mass mind, a call that boils the blood, a call that sums up the thrill-filled, Trump-approved, Modi-led, Shah-engineered Bharat: Goli Maaro. Goli Maaro Salon Ko.

What dynamism! What awe! What patriotism! Flag-waving, saffron-blessed admirers of our one and only Amitbhai Shah marched to his mega show in Kolkata last week chanting Goli Maaro.

Earlier, Union Minister Anurag Thakur had set the pace by clapping his raised hands and prompting Goli Maaro cries from the audience.  When a reporter asked him about this, he denied it. “You are lying,” he told the reporter and asked him to go and get better information.  It requires a special kind of lunacy to deny something that is there on video for anyone to see at any time.

Hate speeches by Anurag Thakur and others had a direct bearing on the riots that rocked Delhi and killed more than 40 people two weeks ago.  Interestingly, when the killings were going on in Delhi, Home Minister Amit Shah chose to travel to Kolkata and deliver a hate speech of his own there.  Chief Minister Mamata, he charged, was allowing riots in West Bengal by opponents of the Citizenship Act. He called on people to oust Mamata and said the BJP would capture West Bengal with two-third majority next time, the same majority he said he would win in the recent Delhi elections.  Amitbhai’s skin must be the thickest in India.

The big irony in the Home Minister’s speech in Kolkata was the statement that people who wanted to create a divide in the country must fear the National Security Guard (NSG).  The BJP and Amit Shah himself are the biggest forces trying to create a divide in the country. Their whole strategy is based on creating a divide and gaining political points from it. In many situations, the strategy has succeeded.  But there is no sign that Shah, or the BJP, or its activists such as Anurag Thakur care about the National Security Guard, let alone fear it. It is the NSG that fears them.

Mamata, for her part, said that Goli Maaro slogans wouldn’t be allowed in Bengal. This was after the BJP workers had marched to the Shah meeting shouting that slogan. She described the Delhi riot as “State-sponsored genocide,”  and accused the BJP of trying to impose the “Gujarat model of riots” across the country. She promised to take “stringent action” against “those who chant murderous slogans” in her State. She arrested three Goli Maaro shouters. But that was just three drops in the Hooghly.

The fact has to be faced that Indian politicians have pushed Indian democracy into a confrontationist conundrum that helps only the dictatorial elements in power.  The will of the authoritarian in power overrides everything else. Note how Justice S. Muralidhar was given midnight transfer orders for wanting FIRs filed against VIP hate speakers immediately and not a month later as VIPs wanted.  He also spoke frankly about “high-decibel rabble-rousers dressed up as TV news anchors.” He said all this in a country where the unsaid matters more than the said. For three days Narendra Modi said nothing about the Delhi riot, then he said something loftily philosophical.  Amit Shah heard Goli Maaro shouts by his Kolkata mob and said nothing. And some say, as Anurag Thakur did, that they did not say what they said. Lying comes easily to our Ministers.

The citizen has to adjust to the realities of life in Goli Maaro India.  In Gurugram, the Hindu Sena activists walked through main thoroughfares like Civil Lines and Sadar Bazar chanting Goli Maaro.  Policemen were present everywhere but took no action. Our Police forces are the world’s most sensible. They beat up people who inconvenience the Government, and look elsewhere when the Government Goli Maaros the people.

Remember the golis that maaroed Kashmiris? Pellet shooting was a political invention of India’s political Police. It left a generation of Kashmiris with lacerated skins that could not be set right. With that, India lost Kashmiris for good.  Now the Government seems determined to lose other Indians, too. When power corrupts a Government, it is not just a tragedy. It is a sin.

5 COMMENTS ON THIS POST To “Patriotism’s new call: Goli Maaro!”