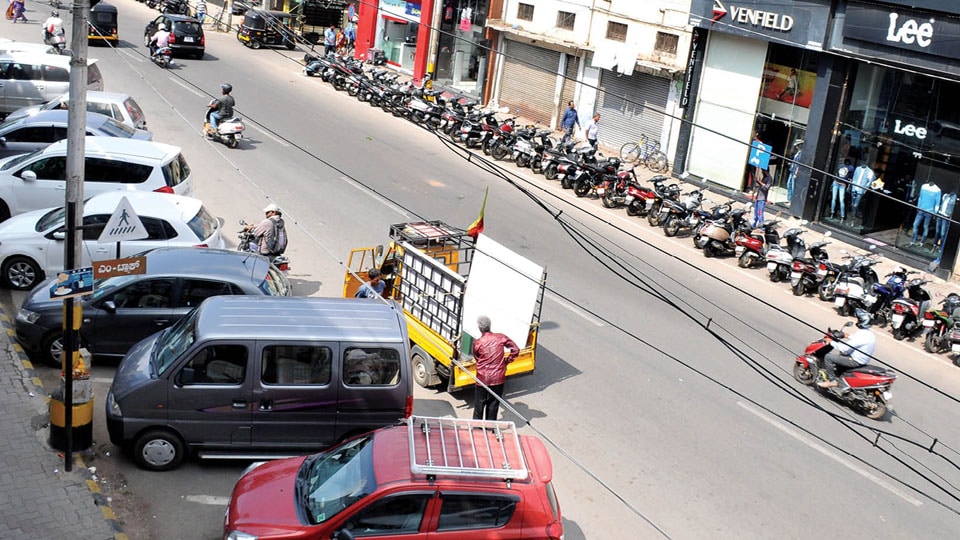 Mysuru: Get ready to pay and park your vehicles on D. Devaraja Urs Road and Ashoka Road as the Mysuru City Corporation is all set to introduce the system and take the responsibility of implementing and managing it in case no private party comes forward.

Already the MCC has called parking tender five times and there were no takers and the civic body will call the tender for the sixth time in a couple of days, probably the last chance for private firms to implement, operate and maintain the system.

The decision has been taken after the issue was raised during a meeting in city chaired by Minister for Urban Development U.T. Khader last week where the Minister had asked MCC officials to deal with parking crisis and introduce pay-and-park facility, at least on key roads.

The pay-and-park system in the Central Business District (CBD) was proposed in 2016 under Build, Own, Operate and Transfer (BOOT) system but the MCC was not able to implement the same.

“Parking spaces in the Central Business District are being used by shopkeepers to park their vehicles, depriving tourists and shoppers of the facility. Over 90% of the cars parked on D.D. Urs Road every day belong to shopkeepers. As a result, surrounding roads get clogged with vehicles parked haphazardly,” he said.

Even the Traffic Police have requested the MCC to introduce the pay-and-park system as it would act as an efficient way to prevent parked vehicle theft, Suresh added. The MCC has, however, decided only on introducing the payment system on Devaraja Urs Road and Ashoka Road and not Sayyaji Rao Road.

The MCC has been unable to reopen the multi-level car and two-wheeler parking on the Town Hall premises due to water-logging. Water has entered the basement and there is unbearable stench. “We will clear the water and seal the water entry points and then call for tenders for Town Hall parking,” MCC officials said. The Town Hall parking facility that was thrown open for public during Dasara was stopped following complaints of fleecing of motorists by the parking contractor.