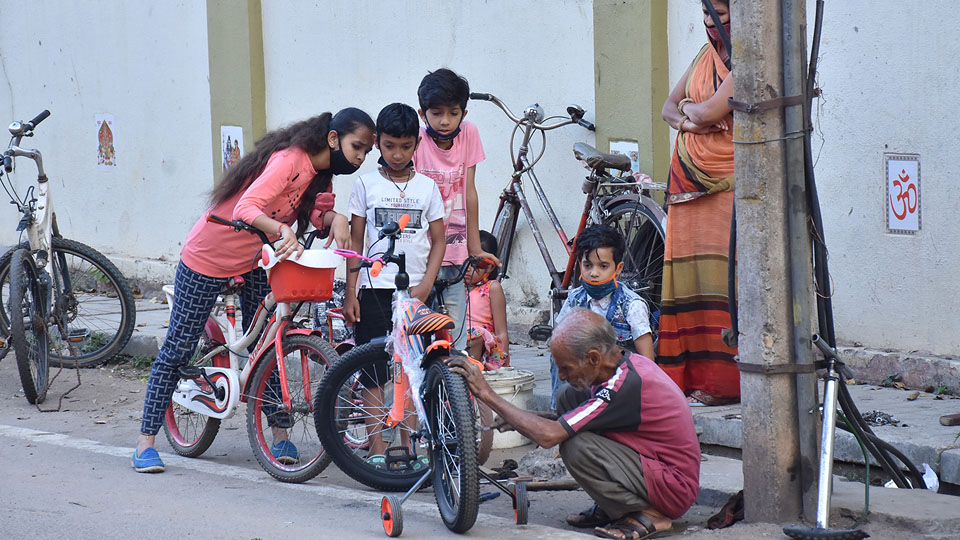 Pedal to Past Bicycle Doctor

At a time when modern bicycles equipped with gears & other facilities are becoming popular, for many reasons including users’ love for non-motorised transport, one can see very few bicycle repairers, who once upon a time dotted every lane and bylanes of Mysuru.

Non-polluting and environment-friendly cycles were for decades one of the cheapest modes of transport, playing a pivotal role in providing point-to-point connectivity, helping people reach nearby markets, railway station, bus terminals, and allowing them to commute short distances in narrow lanes where cars and autorickshaws cannot easily travel. Even before the emergence of ‘Rent a Bike’ concept, these cycle repair shops doubled up as places renting out bicycles on hourly basis and they would charge a nominal fee. Even repair and spare parts costs had to be within the reach of a common man.

Thanks to other means of transport, bicycle riding has seen a declining trend and most mechanics have been pushed out of trade. But there are some who have continued the humble profession, rain or shine.

Meet 78-year-old M. Abdul Rasheed who has been a cycle mechanic for a major part of his life — 40 years and he continues it with pride. In 1974, he opened ‘Baba Budangiri Cycle Shop’ on Narayana Shastri Cross Road near Shanthala Theatre. His business thrived as there was a huge demand and Rasheed, though a novice in cycle repairs, learnt the trade quickly and became a skilled repairman.

Rasheed studied SSLC at Sarada Vilas School in 1961 and was assisting his father, who was a contractor, to maintain cash and records. He recalls those days and becomes emotional. “My dad passed away in 1971 and I started car driving to eke out a living. But an accident ruined prospects and I turned to cycle repair profession,” he says with a wry smile.

He was staying at Nanjumalige earlier and now is a resident of N.R. Mohalla. “In 1974, the rent for my cycle shop was Rs. 15 and as the business grew, I rented out three more shops. I had four to five assistants and there were more than 60 cycles at my shops,” he recalls.

“While other shops charged up to Rs. 200 for repairs, I charged just Rs. 20 and I made a name for myself and my customers were happy and I was the most sought-after repairman in and around my shop area,” he adds.

Rasheed is the eighth child for his parents who had 20 children. “Only 12 children survived and now I am the only one alive. My father had huge properties and after his death, my siblings quarrelled for property and the issue reached courts. I did not fight for either property or money and I continued to work in my shop,” he reveals.

Rasheed has three daughters and a son and is leading a contended life with his wife Noorunnisa. Tears welled up his eyes while narrating his daughter’s story. “My son has three-year-old son. My third daughter’s husband passed away due to heart attack and she came to stay with me. She is a diabetic and I had to get her foot amputated due to a small wound. Now fortunately her son is earning some money.”

Speaking about leading a peaceful life, Rasheed says that their family has APL Ration Card and no rations are supplied. “We need BPL Card which will be helpful. COVID-19 hit my family hard and I was out of work for almost a year. Now slowly the work is picking up,” he said.