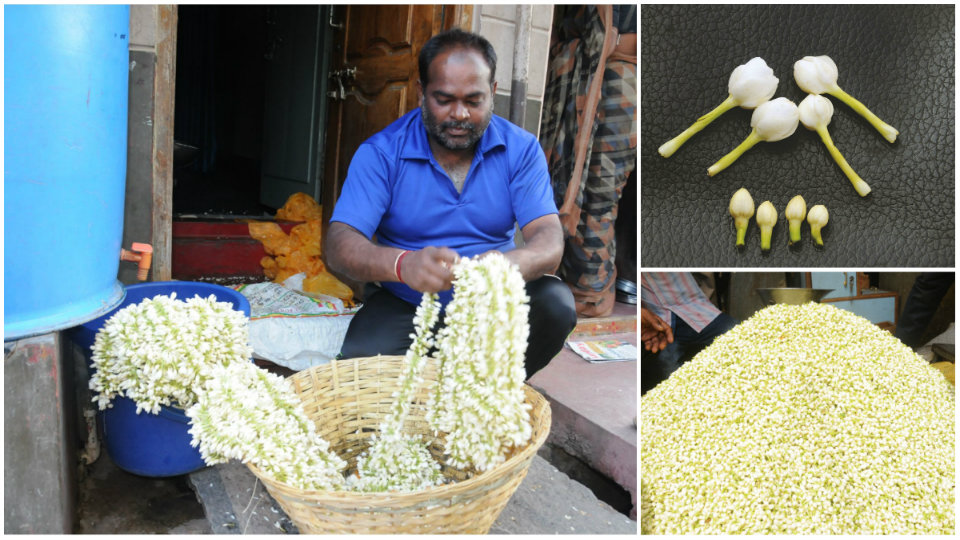 William Shakespeare’s axiom “A rose by any other name may smell just as sweet” may not apply to the famed ‘Mysooru Mallige.’ This variety of jasmine not only has unmatched fragrance but also an inextricable link with the royal city.

But of late, people of Mysuru, who were earlier taking pride at the very mention of Mysooru Mallige, are robbed of a chance even to see them. Reason: Rapid decline in production and the arrival of different varieties (of course, not with the same fragrance) from Tamil Nadu and Andhra Pradesh. These varieties are ruling the market now and the original Mysooru Mallige has taken a backseat.

Patronised by the Wadiyars of Mysuru, the Mysoore Mallige gets its name since it is grown mostly around Mysuru and partly in Srirangapatna. The uniqueness of this jasmine variety is its lingering fragrance. The flowers are used for garlands, especially at weddings and other auspicious occasions. Among the places where Mysooru Mallige was grown are Veeranagere, Ganesh Nagar and K.R. Mill area.

Blame it on the rapid urbanisation of Mysuru city since early 2000, the fields on the outskirts of the city where jasmine was once grown predominantly, have been converted into residential layouts. And because of the slump in jasmine cultivation, there has been a demand-supply gap, causing a sharp rise in its prices, especially during festivals and auspicious occasions.

Years back, this variety was grown in abundance in all those areas in Mysuru that come under ‘Horticultural Zone’ that extended up to 250 acres. So much so that the flower was the only crop in areas like Ganesh Nagar and K.R. Mill area and hundreds of families depended on the income generated by flower cultivation and marketing.

Manjunath, a flower merchant at Devaraja Market, gets emotional when he speaks about Mysooru Mallige. “People were attracted to our outlet as they used to get the fragrance at the very entrance of the market. Such was the smell and we made good business selling them. Now-a-days, during jasmine season, only 20 to 30 kgs of Mysooru Mallige come to our outlet per day while we get 1,000 to 1,500 kgs of the jasmine variety from Tamil Nadu,” he says.

“You cannot compare Mysooru Mallige with Tamil Nadu jasmine. While our Mysooru Mallige has rich fragrance, the TN flower variety does not have any smell. As there is a severe shortage of Mysooru Mallige, we are forced to sell other varieties. Even if Mysooru Mallige comes to our market, it is very expensive and most of the people do not buy them due to the cost factor,” he regrets.

Added to the decline in production, factors like lack of rain and increasing cold have contributed to the steady decline in Mysooru Mallige yield and supply.

Manjunath’s family has been into flower business since decades. He and his brother N. Srinivas run the business now at Sri Gayathri Flower Stall. Their grandfather Mariyappa and father Narayanappa too were running the store at Devaraja Market. “They used to trade only Mysooru Mallige as tonnes of the flower would flood the market every day.”

Both these brothers have been supplying flowers to decorate Golden Howdah during Dasara celebrations since 18 years. “Sadly, most of the areas that grew Mysooru Mallige have been converted into house sites and now there are only a handful of growers,” Manjunath adds on a remorseful note.