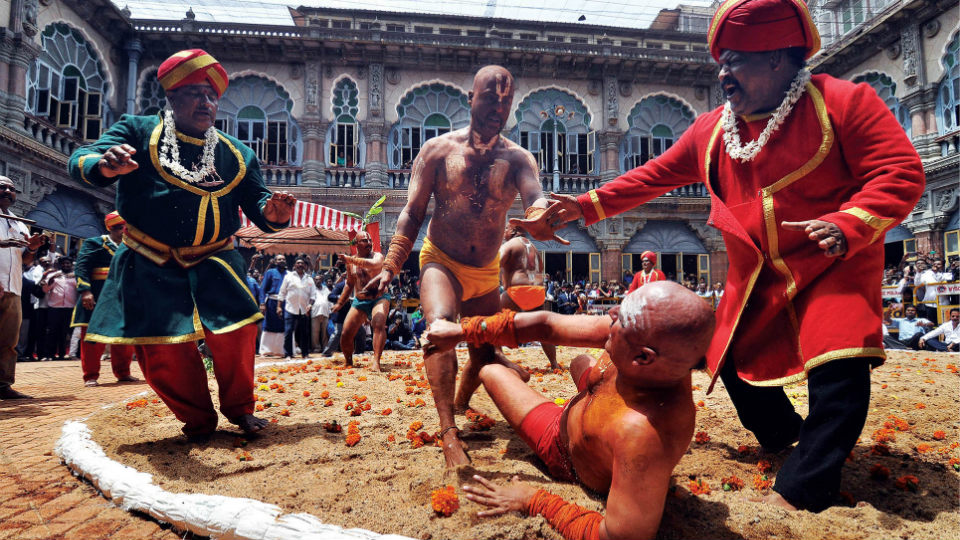 The Jetties of Mysuru have been continuously following their traditional practice of Indian wrestling or Kusti which has been an integral part of Mysuru and Dasara festivities. Tiger Balaji is one such prominent figure, who has dedicated his life for wrestling. He was trained at ‘Bhoothappana Garadi’ and has been one of the greatest wrestlers of Mysuru. Being the son of M.R. Sudarshan, an Olympic champion in weight-lifting, athleticism and discipline is evident in his blood.

His journey to reach the heights of wrestling is admirable for the amount of sacrifice and energy he has put in. But his efforts and laurels haven’t received much recognition from the government. His career statistics speak for themselves as he has lost only three bouts or battles out of the 150-plus matches that he has played.

He says, “It is very sad to see that those people who lost to me in the akhada have received Kannada Rajyotsava State Award and I’m yet to receive one. I have been at my best in every fight and have managed to win almost all of them.”

The 58-year-old Pehlwan came into professional wrestling in 1980 and took the then Mysore Maharaja by surprise. Balaji was an aggressive wrestler and once on the field, he would make life difficult for his competitor. Impressed by his wrestling abilities, late Srikantadatta Narasimharaja Wadiyar conferred on him the title “Tiger Balaji.”  He peaked in his career from 1980 to 1988 and earned laurels as he defeated several mainstream wrestlers (Pehlwans) like Mohammed, Iqbal, Vijendra, Mukund, Mysore Kitty, Harihar Mehboob, Prakash Bildar Bombay, etc. He has also been trained by Mysore Mooga Pehlwan. There is a fad in Mysuru that whoever has the name Balaji is added with a prefix of ‘Tiger’ to his name. 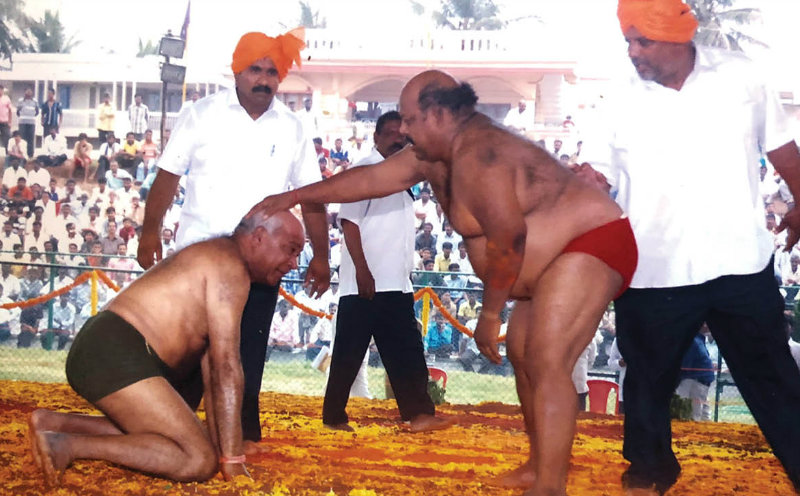 Friendly BOUT: The then Minister Revu Naik Belamagi (left), who used to be a professional wrestler, seen in action with Balaji to mark the inauguration of Dasara Kusti at D. Devaraja Urs Multipurpose Stadium in Mysuru during October 2010.

During Dasara, on Vijayadashami Day, a wrestling event called Vajra Mushti Kalaga is organised at the Palace premises. In this, knuckle-dusters with sharp edges (Vajra Mushti) are worn on fists and are used to hit the opponent’s forehead and the fight would conclude when the first blood is drawn.

READ ALSO  Art exhibition on the concept of 'Outsider'

Speaking to Star of Mysore, Tiger Balaji says, “Traditionally we as Jetties were supposed to take part only in Vajra Mushti and the Maharajas used to take care of us. But now that there is no Maharaja, we have entered the Akhadas to fight on the red mud.”

With age advancing, several thorns were thrown on Tiger Balaji’s way. He stopped competitive Kusti in 2002 as none of them were ready to fight with him and he was against match-fixing that had become common during that time. He urged the wrestlers to fight honestly and do justice to the audience and the game. With the modern Garadis spoilt by politics and with every amateur wrestler with a couple of wins getting the title of Ustads and becoming teachers, Tiger Balaji feels that the real spirit of Kusti is lost.

He adds that day-by-day there is a reduction in the number of Pehlwans in Mysuru as during tournaments many Associations rope in wrestlers from other States and thus there is no scope for the city’s very own wrestlers. Since 2012, he has been officiating as a Referee during the wrestling competition at the Mysore Palace during Dasara and other tournaments. His sons Balram Jetti and Vishnuram Jetti, who are also Pehlwans, haven’t received a satisfactory job in spite of sending in several applications. With no funds from the government, Tiger Balaji currently meets his family’s expenses by driving an autorickshaw and selling milk. 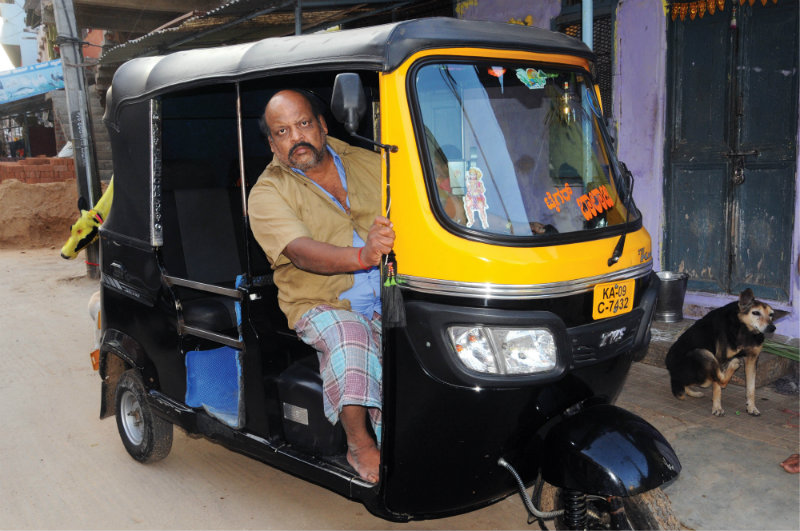 On being asked about the cultural influence and the dominance of gyms and fitness centres in city, he says, “The modern generation has got the entire concept of body-building and fitness absolutely wrong. The gym centre gives dumb-bells in the hands of members right from day one and they just repeat it on and on. The importance of nutrition is completely ignored over there. Even my son once came to me and said that he will stop eating rice as it leads to obesity. I was shocked as during my days I ate everything and even rice and still sported a 6-pack and a great physique.”

His training programme in those days started at about 3.30 am. He would break 5 to 6 eggs and drink them directly and apply oil all over his body. He would do around 6,000 push-ups and about 2,000 to 3,000 push-ups without break. Others would turn up at about 5.30 am, and by then, Tiger Balaji would have completed 75% of his training.

He said, “I would be busy doing sit-ups and counting them to reach around 6,000. Suddenly my friend would challenge me to do 2,000 more by bribing me with a chicken and I used to continue and win that chicken.”

His diet included fruits, vegetables, mutton, badam and dry fruits, Rabdi (a mixture wherein one kg of butter is boiled into ghee and mixed with one litre of hot milk) along with regular food. His daily expenses during the 1980s was about Rs.550 per day. His constant support has been former MUDA Chairman P. Govindaraju, who has been taking care of him since 30 years. 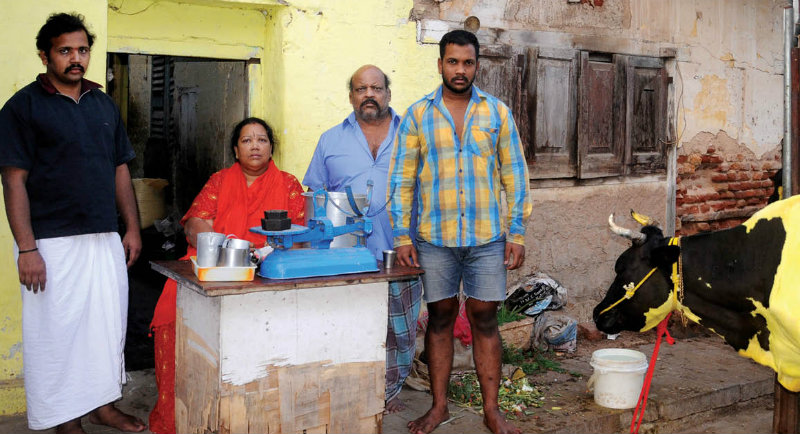 Balaji with his wife Pushpa and sons Balram and Vishnuram in front of his dilapidated house at Sunnadakeri.

Tiger Balaji was an aggressive wrestler and gave everything in store for the welfare of the game in a true sportsmanship spirit.

He also performs Amba Thai Puja, and according to him, only if one worships this Goddess, one will be called a Pehlwan. His message to the youngsters is that he was open to train and groom them, if they are dedicated. Then he will dedicate his time and train them irrespective of their background.

He intends to open a Garadi Mane at his residence in Sunnadakeri, K.R. Mohalla, in the near future. Patronised by erstwhile Mysore rulers, wrestling needs to find its roots back to carry on the game in the right direction with support from the authorities to find exposure beyond Dasara.

Tiger Balaji V. Shourabh Vajra Mushti Kalaga
Disappearing Fragrance of Mysooru Mallige
Life in the 90s: A peep into the daily routine of a Nonagenarian Legend