Home » News » People will respect if you are honest and upright, District Minister tells probationary Police 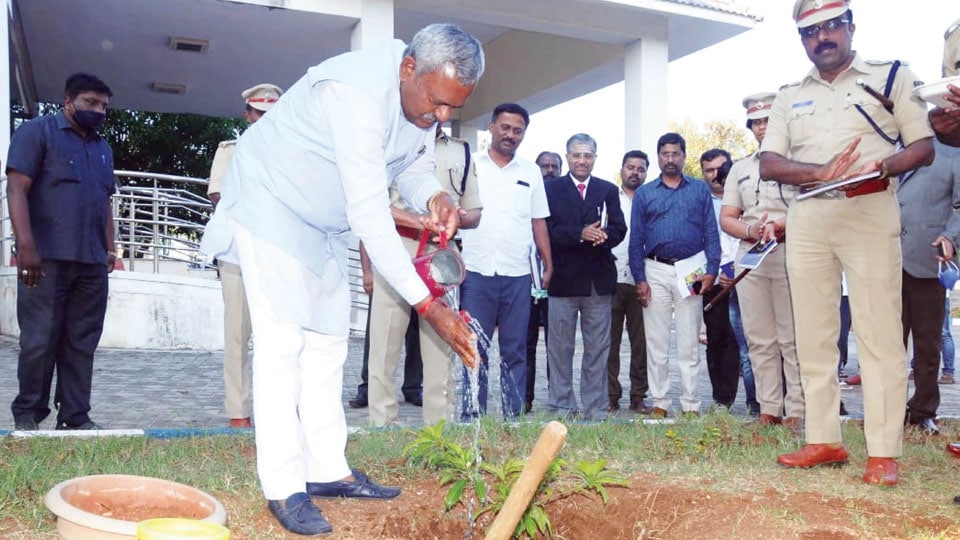 People will respect if you are honest and upright, District Minister tells probationary Police

Mysore/Mysuru: The State Government will get good name if Police personnel respond to people’s problems. This is a lesson for those who are currently under training and later resume their duty, opined Co-operation and District in-Charge Minister S.T. Somashekar. He was participating in an interaction with the probationary candidates undergoing training as Deputy Superintendent of Police (Dy.SP) and Police Sub-Inspector (PSI) at Karnataka Police Academy (KPA) here yesterday.

The Minister said everyone will respect once the trainee Police personnel get posting after completion of their basic training. The Karnataka Police was considered best in the country. The assailants of former Prime Minister Rajiv Gandhi were nabbed by the State Police. The sense of duty and efficiency of Karnataka Police were appreciated countrywide, he added.

Somashekar said he had been in-charge of the district for the last one year and not a single untoward incident had happened during this time. Even the performance of Mysuru Cops during the lockdown was exemplary. If people sleep without worries that means Police were doing their duty. “Police must undergo good training and read important judgements which are available in City Library to update knowledge. Let it be any case but it needs to be probed from different angles. If you are honest, people will love you and the criminals will be scared of you.”

For instance, in Raghavendra Co-operative Bank, there was an agreement between the Bank management and developers resulting in embezzlement of funds worth crores of rupees. To check this, tough rules were being framed and assets would be attached. Plans are afoot to bring amendment to the existing rules to prevent those involved in scams from getting stay orders from Court, he said.

Action would be initiated under Sec. 29C of the Act against the accused and before that an inquiry would be held by the Department of Co-operation.

Decision had been taken to expel President of any Co-operative Bank or Society, if found misusing depositors’ money and also to file First Information Report (FIR) against the accused. All loopholes in the existing rules were being plugged to make it stringent. The Bill to amend the same would be tabled in the next Session, he added.

Somashekar said the State Government was extending its full co-operation to the Union Government which wants auditing of Co-operative Societies and bring it under the ambit of Reserve Bank of India (RBI). This would guarantee the depositors’ money also. The confidence of people on Co-operative institutions must not go. In fact, the Police personnel were given loan for education of their children, he added.

KPA Director Vipul Kumar said the Minister knows everything about the Police Department and he was a role model politician.

Somashekar had invited suggestions on many issues but had not interfered in the Department’s affairs anytime. If there is demand from other districts for Somashekar as their District-in-Charge Minister, it shows his helping nature and social concern, he opined.

ONE COMMENT ON THIS POST To “People will respect if you are honest and upright, District Minister tells probationary Police”