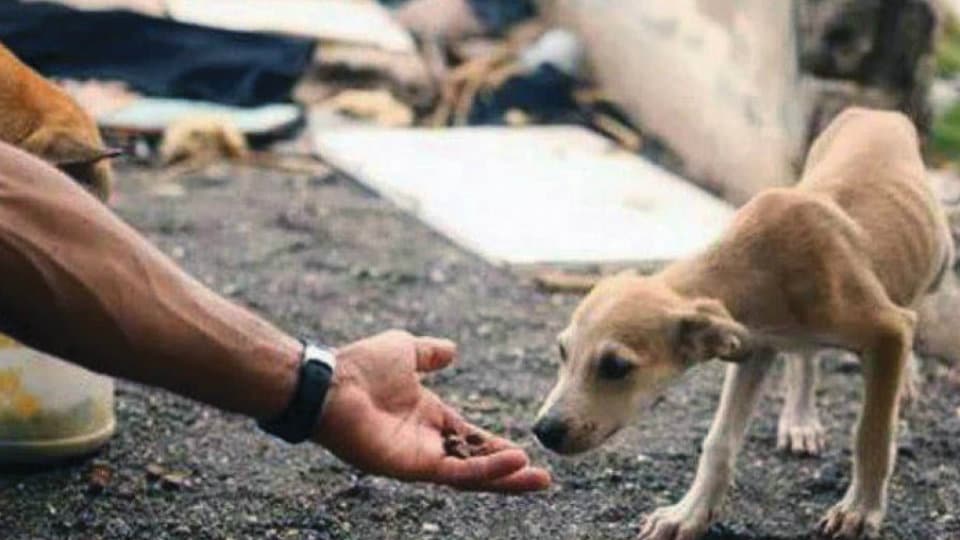 Can anyone stop me from feeding stray dogs in a society?

There is no law that prohibits the feeding of street animals. Citizens/animal welfare volunteers who choose to do so are in fact performing a duty cast upon them by the Constitution of India — of showing compassion to all living creatures. Recently, the Animal Welfare Board of India (AWBI), a statutory body under Ministry of Environment and Forests, Government of India, has framed exhaustive guidelines regarding stray dog feeding. These have been placed before and upheld by the High Court of Delhi. The orders passed on Dec. 18, 2009 and Feb. 4, 2010 by the High Court of Delhi, mandate not only that those street dogs will be fed, but that they will be fed in order to confine them to the localities/areas that they belong to. Confining them to the localities that they belong to facilitates area-wise animal birth control, and yearly/annual vaccination.

The Delhi High Court, vide its rulings in 2009 and 2010, has also actually ordered the Delhi Police to protect persons who feed and care for street dogs, and who are often exposed to the ire of ill-informed, ill-advised residents/administrators of those areas. The Delhi High Court, in its judgements, pronounced on 18.12.2009 and 4.2.2010, says that “it is necessary to bring into record that these individuals and families who adopt stray animals are doing a great service to humanity as they are acting in the aid and assistance of Municipal Authorities by providing these animals with food and shelter and also by getting them vaccinated and sterilized. Without assistance of such persons no local Municipal Authority can successfully carry out its ABC programme.”

The Court has proceeded to say that “the local Police and the Municipal authorities are under obligation not only to encourage such adoption but also to ensure protection to such persons who come forward to take care of these animals specifically the community or neighbourhood dogs so that they are not subjected to any kind of cruelty,” finally, the Court has said “that every individual has the right to live his life in the manner he wants and it is necessary that the society and the community recognise it.”

What is the Animal Feeders Card? How will it help?

Animal Welfare Board of India has decided to issue Identity Cards to Street Dog Feeders/Colony Care Takers of Animals who are taking care of animals in their locality. A proforma of registration form can be downloaded from this link: http://awbi.org/

Download the form and send the duly filled form along with the following: Two passport size photographs; self -attested true copy of the Ration Card/ Voter ID/ Driving License/ Passport/ PAN Card to the following address:

ANIMAL WELFARE BOARD OF INDIA

The applicant needs to fill in personal information such as name, address and experience. Once the application is submitted, the ID card would be processed and mailed to the applicant. Card would have the person’s name and an attestation that he/she is doing a right and lawful deed and the Animal Welfare Board supports it. This lends credibility to the person. The AWBI is a legal advisory body that was formed under the Prevention of Cruelty to Animals Act of 1960 to protect animals.

The goal of the card, which does not provide any exclusive rights, is solely the welfare of animals and caretakers. “Most people don’t realise that sterilisation and vaccination of stray dogs would be possible only through feeding and befriending dogs.”

In December 2011, the Delhi High Court had passed an order voicing its approval for designated “dog feeding spots” for stray canines in the city. It passed the order on a petition which sought to protect dogs from “intimidating” residents, so they could be fed without any hassle.

The Court also ruled that the Police should assist dog feeders if they faced any “harassment” from residents and also ordered the AWBI to designate specific feeding areas.

What do cloudy eyes in dogs indicate?

Nuclear sclerosis, which is also called lenticular sclerosis, is a condition that causes the pupils of the eyes to take on a cloudy bluish-grey appearance. Many owners of older pets assume the problem is cataracts. And while cataracts are a relatively common symptom in aging dogs and cats, nuclear sclerosis is even more prevalent. The condition is also seen in humans and horses.

Nuclear sclerosis is considered a normal change to the lenses of the eyes. It usually develops in both eyes simultaneously and is often seen in animals over the age of six. The condition isn’t painful. It comes on gradually, and pets are able to adapt very well to the minor changes in vision that occur.

In younger animals, the lens of the eye is clear because it is composed of tissue fibres that are perfectly organised. But as a pet grows older, more and more fibres are deposited to the outer rings of the lens. Since the lens resides inside a capsule and can’t expand to accommodate the additional fibres, the new fibres push the older fibres close together and toward the centre of the lens. This compression causes the lens to harden and cloud over.

The only clinical symptom of nuclear sclerosis is a cloudy appearance of the lens of the eye. Occasionally, a pet will develop mild problems in judging distance and range.

Most veterinarians can quickly tell the difference between nuclear sclerosis and a more serious problem, like cataracts, with an ophthalmologic exam. The corneas are typically checked first, often using a device called a slit lamp. If there’s cloudiness on, or just behind, the cornea, the problem is not nuclear sclerosis.

When your vet looks deeper into the eye with an ophthalmoscope, which may require the use of medicated drops in your pet’s eyes, he or she will be able to see all the way through to the retina if nuclear sclerosis is present. If the problem is a cataract, it will partially or completely block the view of the retina. If your vet can’t see through the lens, neither can your pet.

Unlike cataracts, nuclear sclerosis doesn’t seriously affect vision and no treatment is necessary. And if your pet has nuclear sclerosis, it doesn’t mean she will automatically also develop cataracts. However, if you notice your pet’s eyes taking on a different colour, it’s very important that your vet make sure it’s nuclear sclerosis and not another more serious eye condition.

What happens if I bathe my dog too often?

The dog will develop skin problems, like dry itchy skin. Dogs have natural oils on their skin and, unlike humans, they should not be washed away.