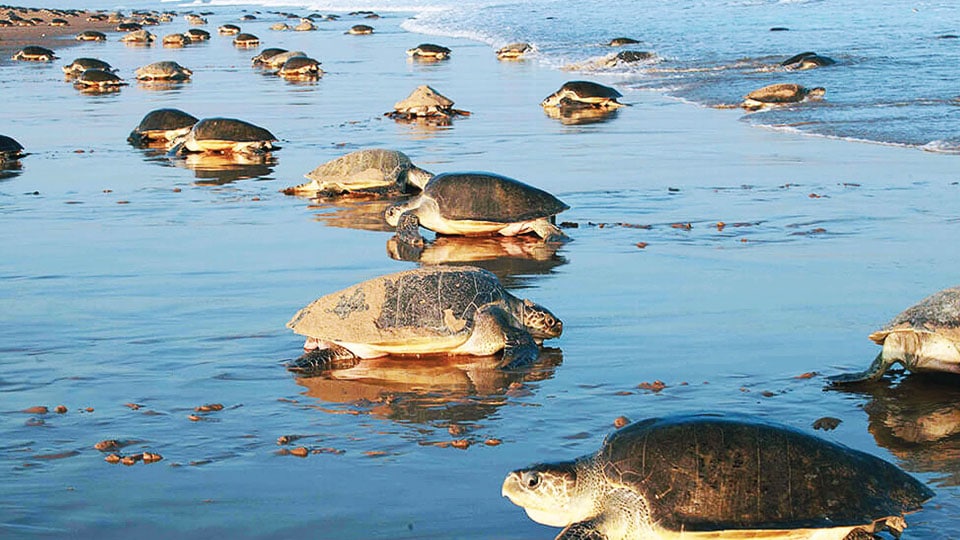 In this week’s Pet Talk, Maneka speaks about sea turtles and causes of their mortality

I just found out that keeping turtles is illegal, where can I release my turtle?

Never release a pet turtle into the wild. Turtles kept in captivity may not have the important nutrients they need to survive through the cold winter. In addition, your turtle may not be native to your area and should not interbreed with wild turtles. Captive turtles may also carry diseases or parasites that could harm the local population. Your turtle will die if released in the wrong place. First study what breed it is, look up where it is found, find a Wildlife Society activist to help you and put the turtle back in its right place and get someone to keep a watch and feed it for some days till it finds its way.

How many species of turtles and tortoises does India have? Are they endangered?

India has 24 species of freshwater turtles and 4 species of tortoises, with areas in Northeast and North India considered in the top three Turtle Biodiversity Hotspots of the world. More than half of these species are Globally Threatened in IUCN (International Union for Conservation of Nature) Red-list and face severe threats to their survival due to man-made factors specially poaching. Turtles are kept as pets and die very quickly, as most people have no idea what they eat. Thousands are eaten for “virility”, specially by Keralites and Bengalis.

How long can turtles go without eating?

A normal, healthy, adult turtle, that has been fed properly during its life, will be able to survive for weeks without eating anything. Baby turtles will not be able to survive for quite as long, as they need protein and food a lot more frequently than adult turtles do. Water is still needed to prevent dehydration. They may lose their weight, and their growth rate will be reduced too.

In climates with winter temperatures, or temperatures that go below freezing, most turtles survive the weather without eating for as long as 5 months or more. Since they are cold-blooded their body temperature drops below 7°C (about 45°F), and turtles enter a state of inactivity called brumation. They become active as usual when there is a rise in temperature and the turtles become comfortable. If they are living in a place with soil, plants with insects, they may feed on them and survive.

What diseases do turtles carry and are they communicable to humans?

All reptiles carry a range of germs, including bacteria, viruses, parasites and worms. Many of these can be transmitted to humans. The most significant of these include:

Salmonella: Salmonella are commonly found in all types of reptiles, and can spread from reptiles to humans when something contaminated with reptile faeces is placed in the mouth. Salmonella infection causes diarrhoea, headache, fever and stomach cramps and can result in septicaemia (blood poisoning).

Botulism: Botulism is a serious and life-threatening illness caused by a toxin released by the Clostridium bacterium that causes paralysis and death. Clostridium is found widely in the environment, including soil and mud as spores. Clostridium commonly contaminates reptiles, especially aquatic reptiles. Adults and older children have a range of bacteria that overgrow the spores responsible, but small babies under the age of one year have not yet developed this protection. It has recently been recognised that exposure to turtles, or to turtle feed, was the likely cause in two cases of infant botulism in Ireland. Turtles are not appropriate pets for small children and should not be kept in households. If you own turtles (illegally), please wash your hands immediately after contact with turtles, or their water, and again on entering any house in which there are small children.

Other infections: illness such as campylobacteriosis (a bowel infection), leptospirosis (a liver disease), trichinellosis (a disease of muscles, the nervous system, and the heart and lungs) have been associated with keeping turtles and, while most are treatable, some can be very serious.

Is legal protection given to turtles in India?

All turtles and tortoises are banned for sale under the Wildlife Protection Act 1972. It is illegal to keep them. The punishments can go up to 7 years. It is illegal to pick up sea turtles that come on shore to lay eggs. It is illegal to fish with net without having TEDs (Turtle Extruder Devices which let the turtles escape) on the boat. Thousands are killed by fishing boats by becoming entangled with nets.

How would I know if the turtle is sick?

If you see any of these symptoms, take your turtle to the vet for a check-up: • Hiding most of the time; • Minimal eating or drinking; • Weight loss; • Swollen joints; • Discharge from eyes, nose or mouth; • Skin discoloration; • Droppings that are runny for more than two days.

How would I know if the turtle is infected by salmonella and how do I maintain hygiene?

Most turtles, both in the wild and in captivity, are carrying some form of salmonella either in their gut, or on their skin or shell. Salmonella is virtually undetectable on a turtle. The bacterial strain is completely harmless to reptiles, but can rapidly spread to any human who does not take proper precautions before handling the animal.

Healthy, normal adults generally need a few days to get over a bout of salmonella poisoning, however, for senior citizens, pregnant women, children and people who have had their immune system lowered due to chemotherapy, cancer, diabetes, etc, it is life threatening.

Do not allow reptiles or amphibians to roam freely in food preparation areas. Do not clean aquariums or other supplies in the kitchen sink. Use bleach to disinfect a tub or other place where reptile or amphibian habitats are cleaned. Always wash your hands thoroughly with soap and water after touching any reptile or amphibian, its housing, or anything (for example, food) that comes in contact with the animal or its housing.

Watch for symptoms of Salmonella infection, such as diarrhoea, stomach pain, nausea, vomiting, fever, and headache. Call your doctor immediately if you have any of those symptoms. Surfaces, such as countertops, tabletops, bare floors, and carpeting, can also become contaminated with the bacteria if the turtle is allowed to roam on them. The bacteria may survive for a long time on those surfaces. Proper handling and hygiene practices are extremely important in preventing the spread of the bacteria and keeping you and your family healthy.

What kind of foreign species of turtles are legal to keep as pets in India?

None. If they are foreign breeds how did they get into India? The person selling them will be jailed for smuggling and you for abetment. There is an international pact called CITES (Convention on International Trade in Endangered Species of Wild Fauna and Flora) which forbids movement of wild animals between countries. Turtles are in the CITES list.

What are some causes of sea turtle mortality?

1. Non-human predation: A significant proportion of nests are subjected to heavy predation. Studies on the population dynamics of the Olive Ridley have indicated that a large percentage of eggs laid during each nesting season are destroyed by humans, wild pigs, jackals, and feral dogs, and by beach erosion.

2. Incidental capture in fishing nets: Near-shore mechanised fishing within 5 km from the shoreline results in the mortality of large numbers of sea turtles along the Indian coast every year. More than 15,000 dead Olive Ridley sea turtles were counted along 480 km of the Orissa coast during 1997-98, and the number has since increased several times. These deaths were due to accidental capture in trawl nets, although details of the incidental capture of marine turtles in fishing nets along the rest of Indian coast are yet to be documented.

3. Loss of nesting habitats: Development activities close to the coast, such as construction of roads, tourist resorts and aquaculture projects, result in the loss of nesting habitats. Besides this, plantations of Casuarina close to some of the major sea turtle nesting beaches has resulted in a drastic decline of the nesting population. The plantations reduce the space available for sea turtles to nest, and once the Casuarina grows it changes the beach topography, rendering the beach unsuitable for turtles nesting (Pandav et al. 1994). Further, legislation which is supposed to protect nesting sites of turtles and other marine life does not include sites presently and historically known as breeding grounds.