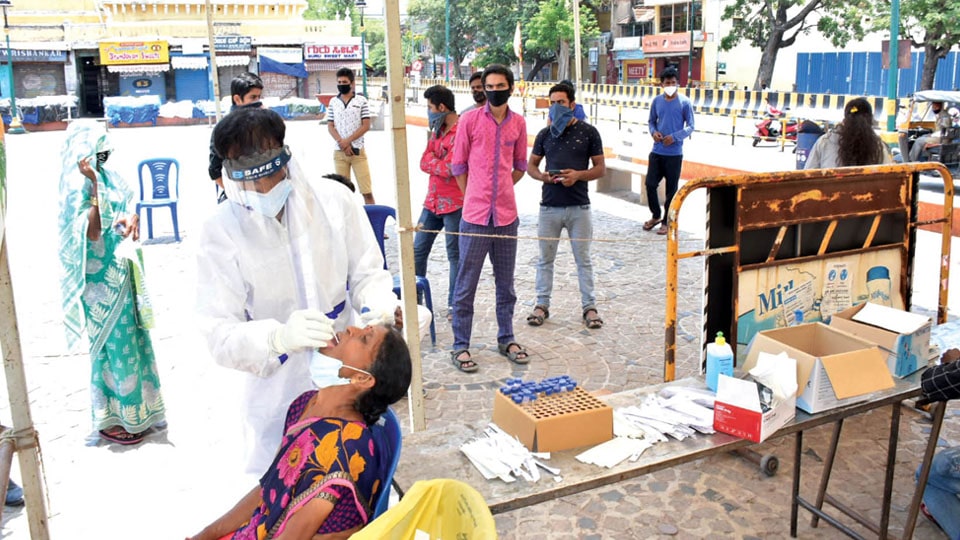 Mysore/Mysuru: The District Administration is planning to deploy additional staff at two RT-PCR testing laboratories in city to issue report within a day.

“The swab collection has reached almost 8,000 a day. The capacity of Mysore Medical College and Research Institute (MMC&RI) laboratory was around 4,000 samples. Similarly, the daily capacity of CFTRI laboratory is 1,500 samples But the MMC&RI laboratory staff has stretched the sample testing up to 6,000 by working day and night,” informed Dr. Mohammed Shiraz Ahmed, District Tuberculosis Officer and Nodal Officer for RT-PCR testing and reporting in the district.

He told SOM that the threat of COVID-19 second wave has made people to come in large hoards to testing centres in city. Naturally, the swab collection has reached 8,000 mark as against around 4,000 last month. As two to three lab technicians have taken ill, there has been a backlog of two days which will be cleared by tomorrow, he said.

Deputy Commissioner Rohini Sindhuri has convened a meeting this evening to discuss this issue. Additional technicians will be hired for both laboratories to give results as early as possible. A decision to this effect is likely to be taken in today’s meeting, he added.

Dr. Shiraz clarified that those who test Corona positive are informed through Covid War Room within 24 hours. But, in case of negative report, it was taking two days. In case any person tests positive, information is first uploaded to various Government web portals including ICMR, and information is then passed on to patient through the War Room. Now, it was taking around 30-35 hours to give test results due to additional burden and that will be addressed soon. If this trend continues, it may not be surprising if the swab collection reaches 10,000 daily in coming days due to spurt in Corona positive cases, he observed.

He said difference in test reports depends upon the quality of swab collected from patients. Health Department volunteers working in RT-PCR Government testing sites were specially trained on the collection of swab from the mouth and nose. With no human interference, testing was done by the machinery which gives result as positive or negative. However, there may be errors in test report given by the Government and Private laboratories due to the way in which swab had been collected from patients. In case of doubt, any person can get a test done from other testing site free of cost. In fact, MMC&RI lab has been adjudged as the best lab by ICMR, he added.