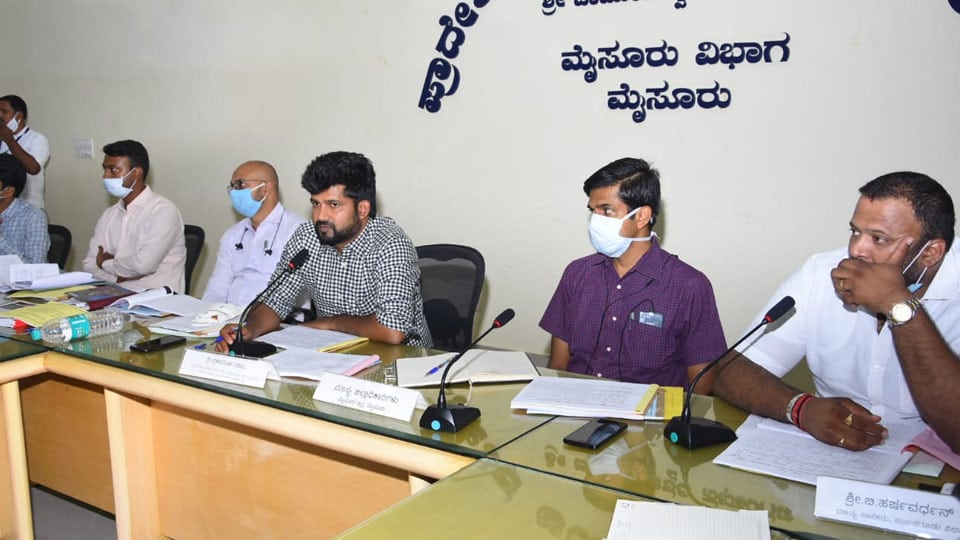 Mysore/Mysuru: Stating that nurturing is more important than the number in the planting of saplings, Mysuru-Kodagu MP Pratap Simha said that the Forest Department officials should concentrate more on saving our ecology and environment by planting of fruit-bearing and flowering plants in Parks and also along the Highways and other roads.

He was presiding over the Mysuru District Development Co-ordination and Monitoring Committee meeting at Chamundeshwari Auditorium in Regional Commissioner’s Office here this morning, during which he reviewed the progress of Centrally-funded projects in his Lok Sabha Constituency.

Pointing out that the National Highways Department has planted neem and such other useful trees in over 45-Km of the Outer Ring Road in the city, Simha said that the Forest Department officials must take measures for planting fruit, flower and other useful trees along all the roads that lead to and from the city.

Noting that it is important to nurture saplings once planted, he said that CSR (Corporate Social Responsibility) funds can be utilised for purchase and installation of tree guards.

Referring to man-animal conflicts in Tribal Hamlets across Mysuru and Kodagu Districts, the MP directed the Forest Department officials for taking urgent steps such as digging up of trenches, erection of Railway track barricades and such other works in order to prevent loss of human lives and farm produce in villages, especially those bordering the forests, out of Central funds.

CESC Superintending Engineer Munigopalraju said that the Department has already given power connection to 448 tribal houses under ‘Sowbhagya’ scheme and the tender for Line Separation Project would soon be invited.

Commenting on Housing projects, the MP wanted to know why the construction of 2,400 Group Houses in K.R. Assembly segment was unnecessarily getting delayed.

Pointing out that this Group Housing Project is a Centrally-funded one, he said that the Project is pending since 2018. He asked the Karnataka Slum Development Board officials to expedite the project as any further delay will lead to cost escalation.

Stating that it has come to his notice that most houses constructed under various JnNURM schemes had unauthorised occupants, especially in Ekalavyanagar, Kamanakerehundi and Amriteshwara Layout, he said that the Slum Board officials must launch a drive to drive out unauthorised occupants and handover the houses to the actual beneficiaries.

He also asked the officials to report to him if any people’s representative came in their way.

Taking exception to some Legislators inaugurating Centrally-funded projects, Simha said that the officials should make it a point to invite the MP for the inauguration and the Legislators should only preside.

Calling for mandatory holding of Revenue Adalats every month, he said that the authorities must involve the MP in the execution of all MNREGA works.

Referring to the Under-Ground (UG) power cable laying works taken up by the MCC, he said that there are complaints that Works Committee members were unnecessarily harassing the Contractors and this should stop at once.

He also cautioned that the MCC must be wary of possible double billing in all the works executed by it.

The MP urged the civic body to ensure proper filling up of all trenches dug for laying UG cables, in order to prevent any possible injuries to pedestrians or motorists.