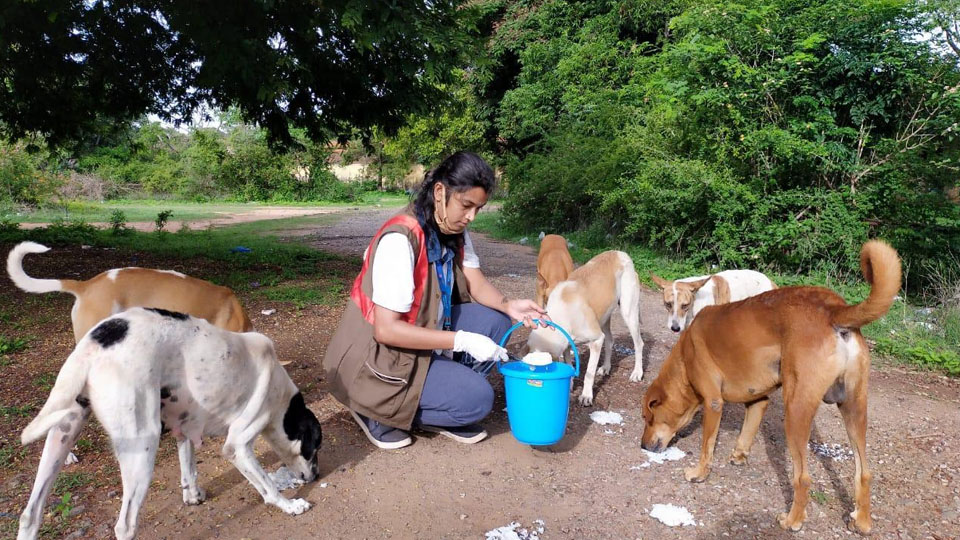 Mysore/Mysuru: As a countrywide lockdown was imposed to contain the spread of Coronavirus, many noble people stepped forward to help and feed the distressed public. But a city-based lecturer displayed her Good Samaritan spirit by feeding stray dogs and not let them starve at the time when these speechless creatures are left with no source of food.

The lecturer Nivedita Harini stepped up in the time of adversity by helping the canines on the streets and her work has attracted the appreciation of NITI Aayog that has tweeted her noble work on its official Twitter handle and said “Not all heroes wear capes. Some feed the strays.” The tweet came after Nivedita completed feeding 3,000 stray dogs. She went on to feed 4,621 strays for over 54 days.

Nivedita teaches Chemistry at Sharada Vidya Mandira and she donned the role of a Corona Warrior to feed the strays. She joined hands with Mysuru District Administration, Information and Publicity Department, Indian Red Cross Society and has accomplished this feat that has gained her national recognition.

Dogs she loved very much and wanted to feed them daily. This made her apply voluntarily when the Information and Publicity Department Director and senior IAS Officer P. Manivannan called for volunteers for social service including feeding the strays. Every day, Nivedita used to feed the dogs for over four hours across the city after preparing milk and protein-mixed food and also purchased pedigree from her contacts to feed the strays. Two hours in her day during lockdown used to go in preparing food and another two hours used to be spent going around the city.

She did not miss even a single day. She fed them on alternate days after the lockdown was lifted when the strays had something to eat. “During initial days of COVID-19 spread, there was a misinformation campaign that pets and strays will cause the virus to spread. I was heart-broken and only later it was clarified that they don’t spread the virus. I took on the mission to feed the dogs and I am glad that I was able to be of service to the speechless beings,” she told ‘Star of Mysore.’

“Usually street animals depend on roadside eateries and volunteers who regularly look after them. The lockdown prevented this. I noticed the dogs hanging about in anticipation of food whenever people pass by. They had become all skin and bones. This moved me and I took a plunge,” she said.

Nivedita began feeding a pack of dogs near her home and soon decided to find more hungry dogs and feed them. She travelled across the city with food containers and fed the hungry lot. She dipped into the sums she had saved. Later, help poured in once her noble act was noticed. “Savitha Nagabhushan of People For Animals (PFA) helped me get pedigree and later many volunteers, my friends and colleagues pitched in with rice and dog food,” she said.

Every day, she used to follow one route – Chamundipuram, Ittigegud, Dasara Exhibition Grounds, Circus Grounds, Nazarbad and Vishweshwaranagar Industrial suburb. “Initially, the dogs never used to come when I offered food. It took some days to gain their trust. Later when I went near them, they used to come running for food,” Nivedita revealed.

Post-lockdown, even when the hotels and restaurants were opened, she continued to feed strays every alternate day. Now she is taking the same route every Sunday. “I am planning to continue this and I have no intention of stopping it though I am digging into my savings,” she vowed.