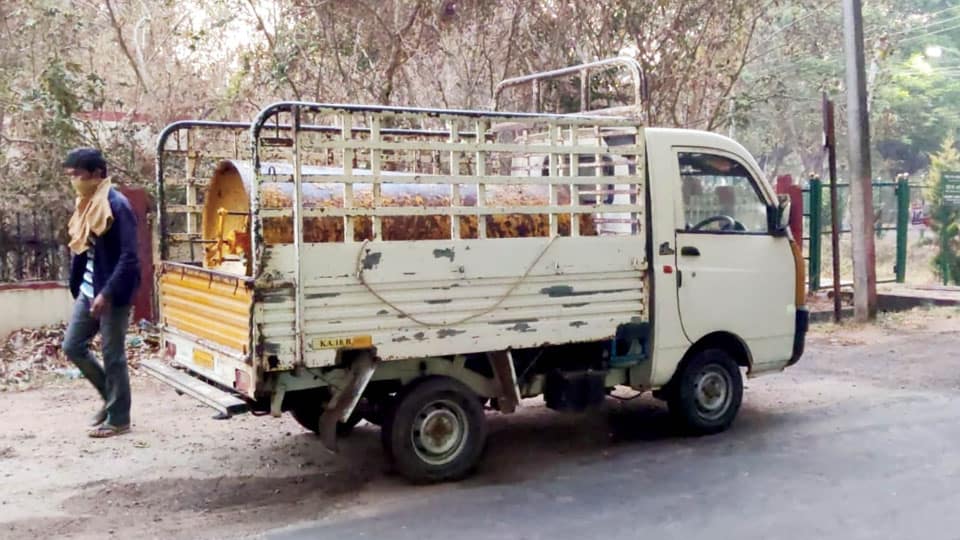 Mysore/Mysuru: The chlorine cylinder, which had developed leakage and later plugged, was shifted to Chikkamagalur yesterday by the agency which had installed it in city.

After the leaking chlorine cylinder was plugged on Monday at about 5 pm, the Chikkamagalur agency was informed on the same night and the agency staff was summoned to city. Yesterday at about 6 am, the agency staff, who had come to city along with a goods vehicle got the plugged chlorine cylinder placed in the goods vehicle, with a help of a crane and took it to Chikkamagalur to diffuse the gas.

All the roads leading to the park, near Railway Loco Quarters and close to Vani Vilas Water Works (VVWW) where the chlorine cylinder was installed were blocked during the shifting process. The roads were opened for traffic only after the agency staff shifted the chlorine cylinder from the spot.

The Chikkamagalur agency in 2015 had installed chlorine cylinder for the purification process of borewell water, which was then being supplied to the Railway Quarters. As VVWW began to supply Cauvery water to the quarters, the chlorine cylinder was not being used since about two years.

Following the leakage of chlorine at about 3 pm on Monday, the chlorine gas had spread in the air affecting motorists, pedestrians and others on KRS Road and Yadavagiri Road and even residents of Railway Loco Quarters.

Fire and Emergency Services personnel, Railway and City Police, who had rushed to the spot, also took ill and all of them were rushed to the Railway Hospital and later shifted to KRS Hospital. In all, a total of 87 persons took ill after inhaling chlorine and 27 persons are still undergoing treatment.

A total of 31 persons including Railway staff and their family members were treated as outpatients at the Railway Hospital. While Railway employees were admitted as inpatients later, the rest were shifted to K.R. Hospital. Four patients were admitted to a private hospital in city and many patients recovered and discharged from the hospitals.

Three children admitted at K.R. Hospital and one person in a private hospital are undergoing treatment in ICUs and all of them are recovering.