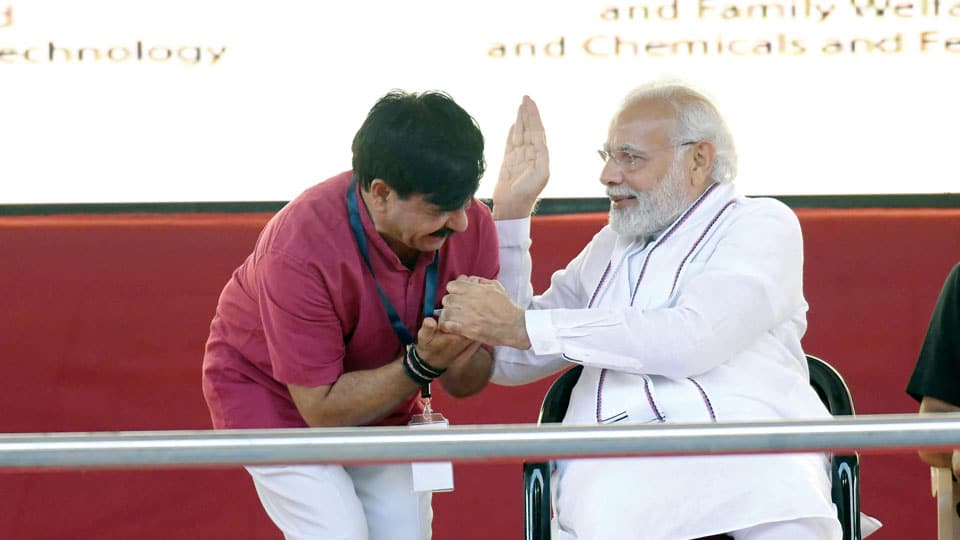 Mysore/Mysuru: Krishnaraja (KR) MLA S.A. Ramdas was very excited when Prime Minister Narendra Modi called the MLA towards him and patted on his back during the programme at Maharaja’s College Grounds yesterday evening.

Modi, who arrived at the venue and sat on the stage, saw Ramdas, who standing at a corner of the stage, waved at him and called him even as Union Minister Joshi was addressing the gathering.

Ramdas, who came near the PM, bowed at him during which PM Modi patted his back and enquired about his well-being. The crowd, on seeing this, cheered both Ramdas and Modi.

After addressing the gathering and before leaving the stage, PM Modi spoke to a section of leaders on the dais during which PM Modi pulled Ramdas to his side, patted his back and spoke with him.

When SOM sought to know as to what the PM had spoken with him, Ramdas said the PM asked: “How is everybody at home, how is Shrikanth and children?” Ramdas further said that when the PM finished his speech and was talking to the CM and Governor, he (PM) pointed his finger at him and said “When his (Ramdas) mother was alive, I used to receive a lot of gifts from her. She never used to miss sending me gifts on my birthday. After the demise of his mother, the brothers have forgotten me.”

To this Ramdas replied saying “How can we ever forget you?” and added that he was indebted to the PM for expressing his love and affection to him publicly.