Home » News » There is nothing as noble as knowledge, says PM 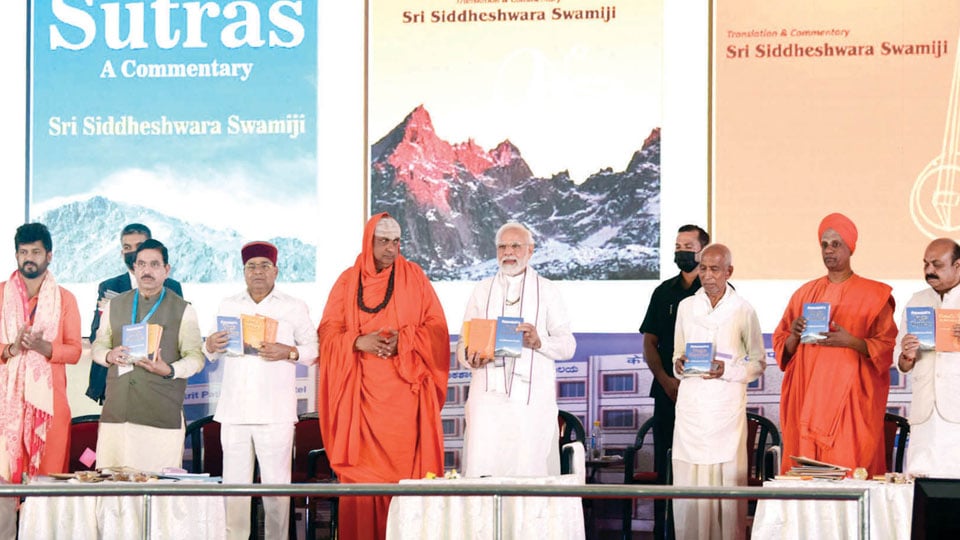 There is nothing as noble as knowledge, says PM

‘Sages shaped our consciousness laced with knowledge and adorned with science’

Mysore/Mysuru: At the Suttur Mutt, the Prime Minister was warmly welcomed by Sri Shivarathri Deshikendra Swamiji in the presence of Siddaganga Seer Sri Siddalinga Swamiji and Jnanayogashrama’s Sri Siddeshwara Swamiji. The PM praised Suttur Mutt and Siddaganga Mutt of Tumakuru for setting up hundreds of educational institutions.

Addressing the gathering, the Prime Minister expressed his gratitude to be present at the Mutt and among the saints. He expressed the hope that with the modern initiatives that are underway, the institution will give a new expansion to its pledges.

The Prime Minister said, as per scripture, there is nothing as noble as the knowledge that is why our sages shaped our consciousness that is laced with knowledge and adorned with science, the one that grows by enlightenment and gets stronger by research.

“Time and epochs changed and India faced many storms. But, when the consciousness of India diminished, the saints and sages all over the country revived the soul of the country by churning the whole of India,” Modi said.

In his address, Sri Shivarathri Deshikendra Swamiji said, “We are immensely pleased to have with us the celebrated Prime Minister of the nation, a statesman, world leader Narendra Modi. The PM has revolutionised Indian politics with unprecedented development works the country has ever seen.”

“He has not taken a day off for the last eight years. And working 18 hours a day without an iota of strain is an enigma for us. Perhaps the world has not seen such a leader in the recent past. Today the world looks up to India for its leadership qualities which have brought magical information to the social and economic sectors. As the saying goes: if Modi is there, everything is possible,” he said.

The Seer said that India managed the deadly pandemic like no other country under his leadership. Be it painful lockdown or management of pandemic, or vaccination, India became the undisputed leader of democratic nations, he said.