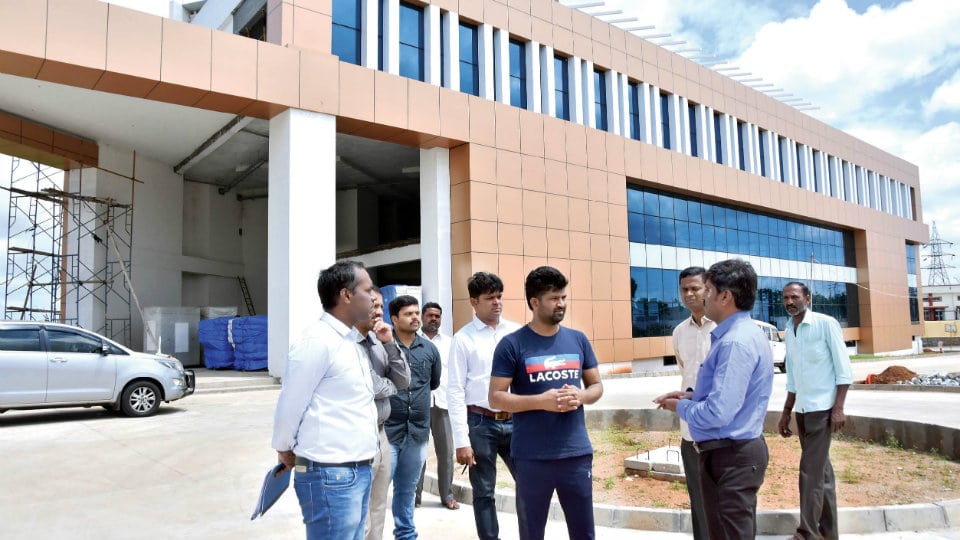 Mysuru, Aug.30 (PM&NNN)- Prime Minister Narendra Modi has been invited to inaugurate University of Mysore (UoM) Centenary Convocation next year (2020) and during his visit there are plans to request him to inaugurate the Software Technology Parks of India (STPI) building and Incubation Centre that is coming up at Hebbal Industrial Area, said MP Pratap Simha.

Addressing the media after visiting the site and inspecting the development works at the STPI premises, here this morning, he said that the STPI in Mysuru was inaugurated in November 1998, by the then Prime Minister Atal Bihari Vajpayee at Sri Jayachamarajendra College of Engineering (SJCE) campus, which was the first non-capital city to have STPI in India.

However, it is due to the encouragement given by PM Modi, that the STPIs have started functioning more effectively with many Start-Up companies setting up their facilities in Tier-II and Tier-III cities, he said.

The connectivity to these cities have improved tremendously with the introduction of UDAN (Ude Desh Ka Aam Nagarik) in Mysuru, the air connectivity is a big boon, as also the expansion of Highway between Mysuru and Bengaluru, he said and added that it is because of the push given by Modi to move away from Metropolitan cities that the focus has shifted to Tier- II and III cities which will benefit their growth, he said.

The STPI broadly provides services that includes Data Communication, Incubation and Project Management and Consultancy Services where the Start-Ups can ideate, incubate and implement their projects. Once these Start-Ups improve then they move out making way for others, said Pratap Simha.

Mysuru itself is a good example of a Tier II city as it has shown significant progress in nurturing the growth of Software industry with nearly Rs. 6,000 crore worth IT exports done from the city, he said.

Asked about the delay in the completion of the Rs. 24 crore project which began in 2016, he said that it is true that the project which was to be completed in 2018 has been delayed. But now it will be completed by December end and be ready for inauguration, he added.

Along with the inauguration of STPI, PM Modi will also inaugurate the ESDM (Electronic System Design Manufacturing) Cluster at the same STPI premises, besides inaugurating the Centre of Excellence worth Rs.137 crore coming up at the All India Institute of Speech and Hearing and Currency Printing Factory at RBI premises, he said.

It may be recalled UoM VC Prof. G. Hemantha Kumar, along with MP Pratap Simha, met Prime Minister Narendra Modi at the Parliament Office in New Delhi last month and invited him to attend the Centenary Year Convocation of the University that will be held in 2020.

Software Technology Parks of India Mysuru is coming up on 2.36 acres of land at Hebbal Industrial Area. The construction of the building is entrusted to Central Public Works Department (CPWD), Mysuru and the project cost is Rs.24 crore.