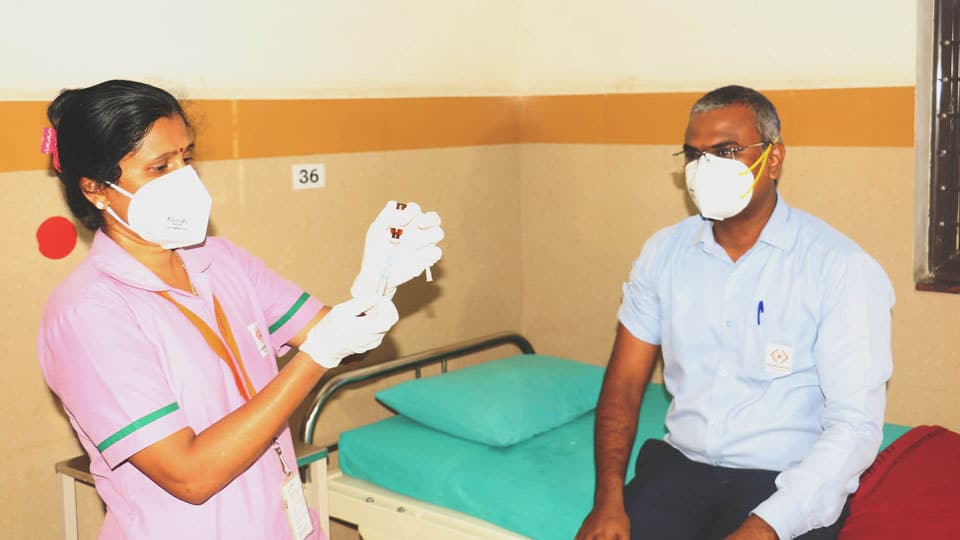 Mysore/Mysuru: Two Hospitals in Karnataka — one in Bengaluru and one in Hubballi — have been selected in the State for launching of vaccination against COVID-19 by Prime Minister Narendra Modi on Jan. 11 at 4 pm.

This was disclosed by Health and Medical Education Minister Dr. K. Sudhakar in Bengaluru this morning. He told media persons that Prime Minister’s Office (PMO) has selected two Hospitals in Karnataka where the vaccine drive will be launched by Modi through video-conferencing. At that same time, the Prime Minister would also hold interaction with the Chief Ministers and Health Ministers of all States. Names of two Hospitals would be disclosed by tomorrow, he added.

The Prime Minister’s interaction with the Chief Ministers would be mainly about the beginning of vaccination against the pandemic from Monday. “I don’t know whether vaccination will begin on Monday as it will be announced by Modi himself on Jan. 11. Confusion still prevails over dosage of vaccine for adults and children and it will be clarified by Union Health and Family Welfare Ministry by this evening,” he added.

Medical Education Minister Dr. K. Sudhakar said as many as 5,000 sites have been identified for the first round of vaccination for healthcare workers of which 235 sites were in Karnataka.

Saying vaccine may arrive in Karnataka anytime today, Dr.Sudhakar said that Karnataka had been allotted 13.90 lakh vials of vaccine which may arrive here anytime. Already, voucher and other information have been shared with the authorities concerned. A number of places has been identified for the safe storage of vaccine. Once the stock arrives in Bengaluru, it would be dispatched to all districts to cover all the healthcare staff in the first round. The huge stock of syringe has arrived and it will be sent to all districts along with vaccine, he said.

He said Union Cabinet Secretary held a video-conference with Chief Secretaries, Principal Secretaries and top brass of Health Department this morning to discuss regarding vaccine roll out and steps to be followed for distribution of vaccine to 5,000 vaccination sites across the country without any hurdles. The Government of India wants to cross check the preparedness of every State as the much-awaited vaccination against Coronavirus is expected to start from Monday. A detailed guideline is expected to be issued by the Union Government tomorrow, he pointed out.

Meanwhile, the Mysuru District Health Department is ready to bring its quota of 35,000 vials of vaccine to be administered to healthcare staff in first round. A special air-conditioned vehicle is ready to bring the vaccine from Bengaluru. Couple of places have been identified for the storage of vaccine in prescribed degree of temperature. Vaccination will be done where two rounds of dry run had been conducted at 11 places in District recently, said Dr. L. Ravi, Child and Reproductive Health Officer and COVID-19 Vaccination District Officer.