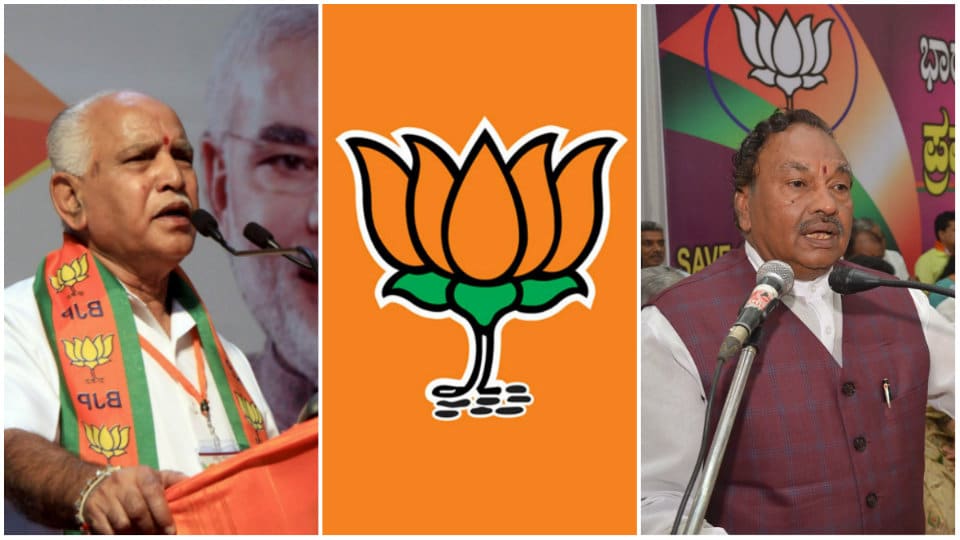 W.B. Yeats in his poem The Second Coming has said the universal truth when he wrote:

Mere anarchy is loosed upon the world,……

The ugly spectacle of violent dissent that was seen in Bengaluru on April 27 at the Palace Grounds where K.S. Eswarappa, the BJP leader, lambasted his Party’s State President B.S. Yeddyurappa using language which is suggestive of low standard of morality, for which one senior BJP member, Aayanur Manjunatha, rightly took strong exception, was an incident the BJP National High Command could have prevented.

The National President Amit Shah could have prevented this blackening of BJP’s fairly good image, if only he had intervened in time. The rumblings were already heard when on April 17th the “Sangolli Rayanna Brigade” that poor, pathetic imitation of Siddharamaiah’s mighty “AHINDA”, held a meeting in Tumukur where Eshwarappa had attended. Because the BJP High Command did not act, Eshwarappa got emboldened to hold the Palace Grounds meeting and wash the dirty linen in public. Now the damage is already done. One wonders if Amit Shah would be able to redeem the ocean lost or unscramble the BJP egg that is sadistically scrambled by BJP’s Eshwarappa.

BJP has not learnt its lesson when Yeddyurappa was rubbished by the covert action of some members, in the shadow, with overweening ambition to become Chief Minister by Jettisoning Yeddyurappa once and for all. Yes, it was the Law Court that sent him to jail. And the Opposition and his own party rivals are harping on this stigma to denigrate poor Yeddyurappa. The result: BJP was reduced to a rump, getting just about as many seats as the JD(S) making way to Siddharamaiah’s Congress in 2013.

Political Pundits now predict that a similar situation awaits BJP following the ongoing internal bickerings. Congress of Siddharamaiah may be the beneficiary and a second term for Siddharamaiah’s Congress seems to be a possibility. Remember the year 2004 and 2009 Parliamentary election? Also remember Dr. Manmohan Singh becoming the PM under UPA for two terms? BJP in Karnataka does not seem to have learnt what ‘Yadava Kalaha’ will cost the party.

This morning the Vijayavani Kannada newspaper has carried the news that Muralidhar Rao, sent to Bengaluru by Amit Shah to douse the fire in the State BJP’s House, has sacked four office-bearers of BJP — Bhanuprakash and Surana of Eshwarappa faction and Go Madhusudhan and Renukacharya of Yeddyurappa faction.

Does this action make sense? It sends the message to the BJP workers, and even to the voters, that both factions are either right or wrong.

Curiously, this decision was taken following Santhoshji’s meeting with Muralidhar Rao! And Yeddyurappa has already made it public that Eshwarappa is acting at the instance and instigation of Santhoshji. And it was no secret that Santhoshji was also an aspirant for the CM’s post when Yeddyurappa was removed from office in July 2011.

If this is any indication of the manner in which BJP High Command is going to douse the fire in the House of Karnataka BJP, the future of BJP in 2018 looks very bleak. Good luck for Siddharamaiah’s Congress.