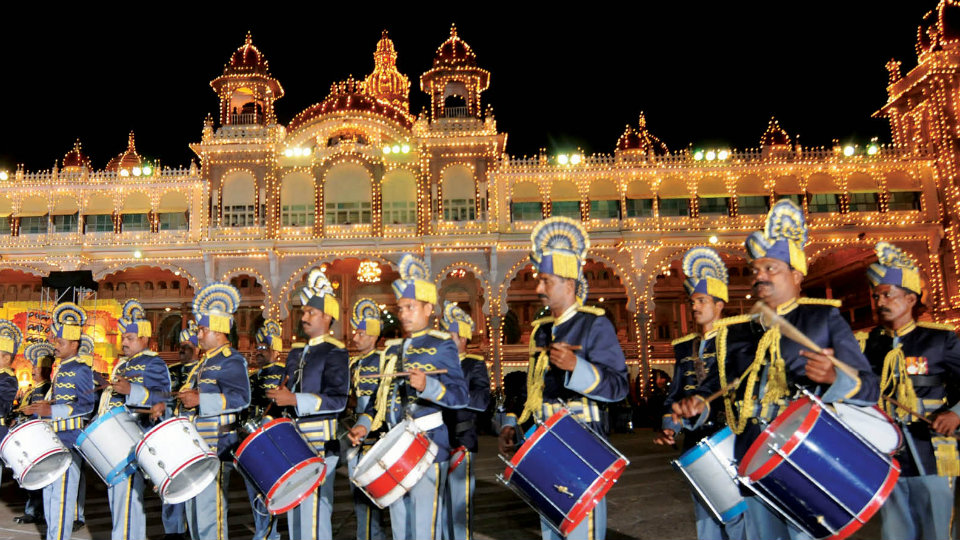 Mysuru:  More than 500 musicians drawn from 36 Police Band contingents from various districts mesmerised the audience with their scintillating music performances amidst rain at Mysore Palace premises, as part of Dasara festivities last evening.

The Band played popular tunes as they marched out of the Palace and took their positions in the open courtyard to the song ‘Bharat Ki Jawan’ to the applause of the audience. After the Band played ‘Royal Fanfare,’ a song composed to greet the VIPs, the General Salute was given to the dignitaries.

The Karnataka Government Band and Karnataka Government Orchestra then performed Speak Softly Love, Bahama mama of Boney M, song theme from Ed Shareen and Titanic. A jugalbandi was performed to the song Nottu Swara by the two teams followed by solo piano performance for the songs Until the last moment, Medley of Yanni, Fur Elisa, Nostalgia (Piano and violin duet) and Raag Rang (Fusion). Later, drummers from all the 36 contingents came forward to perform ‘Drummers Delight’ which received thunderous applause from all those who had assembled in Mysore Palace premises. They also performed Rajasthan Review Order, Abide With Me and Saare Jahan Se Achha, to receive a standing ovation from the audience. Police Band performing in the backdrop of the illuminated Mysore Palace
as part of Dasara last evening.

DG&IGP Neelamani N. Raju announced a cash prize of Rs. 5 lakh to the Best Police Band on the occasion.