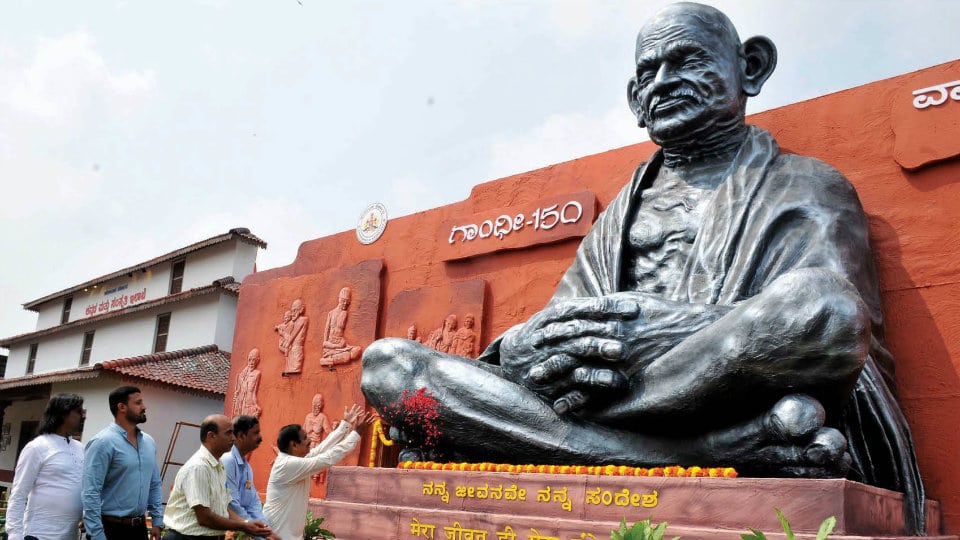 The installation of 22-feet tall statue of Mahatma Gandhi in meditating posture at an exclusive stall ‘Gandhi-150’ set up by the Department of Information and Public Relations at Dasara Exhibition Grounds has been drawing huge crowd this year.

The Department has installed the statue to mark the 150th birth anniversary of the Father of the Nation besides displaying some of the rare pictures of Mahatma Gandhi’s life, freedom struggle, visits to Karnataka and his death at the stall.

Welcoming the visitors to the stall at the entrance is the life size sculpture of Gandhiji made from Plaster of Paris (PoP) in a sitting posture on a pedestal. Inside the stall are the embossed pictures of Gandhiji during freedom struggle till his end.

Also included are pictures showing the Mahatma right from his school days and his association with other like-minded people. Pictures of Sabarmathi Ashram, Gandhiji’s visit to South Africa to practise law, Salt Sathyagraha, 21 days of hunger strike, Gandhiji sitting with six–year-old former Prime Minister Indira Gandhi , his visit to Karnataka for more than 18 times during freedom struggle are also exhibited.

Pictures of the Mahatma’s first visit to Bengaluru on May 8, 1915 to address a gathering at Government College, Gandhiji addressing people at Khuddus Idgah Maidan Grounds at Benson Town on August 21, 1920 and his Presidential address delivered at the historic Congress convention at Belagavi city in 1924 can be seen.

Other photos which are on display at the stall are Gandhiji’s visit to Chikkamagalur in 1927, Imperial Milk Dairy at Bengaluru, his visit to Karnataka to instil confidence among the downtrodden communities in 1932, his fund collection drive, visit to Harapanahalli, Badanavalu in Mysuru district, Karwar, Mangaluru, Vijayapura, Ballari and other places.

Gandhi’s visit to Somanahalli of Maddur taluk in Mandya District in 1934 when former Chief Minister S.M. Krishna was just a seven-year-old child, Gandhiji meeting the then young boy Gandhian Dr H. Narasimhaiah, his martyrdom, body at Birla House, Samadhi at Rajghat and other pictures are also kept for public viewing.

The Department has set up this stall with the intention to spread the teachings of Mahatma Gandhi which is relevant to the society even now.

It has made all efforts to provide all information related to Gandhiji’s teachings, life struggle and contributions to freedom movement, eradication of untouchability, superstitions, blind beliefs and other social evils prevailing in those days in the society.

The Department has also displayed the replica of spectacles, walking stick, slippers and cap used by Gandhiji for public viewing.

As many as 85 artistes including Krishna,Rangaswamy, Vishnu Madhav, R. Anandraj had worked under the direction of Art Director Raghu for more than 22 days to prepare this stall to throw light on the teachings and works of Mahatma Gandhi. Sanjay Marketing has constructed the stall for the Department of Information and Public Relations