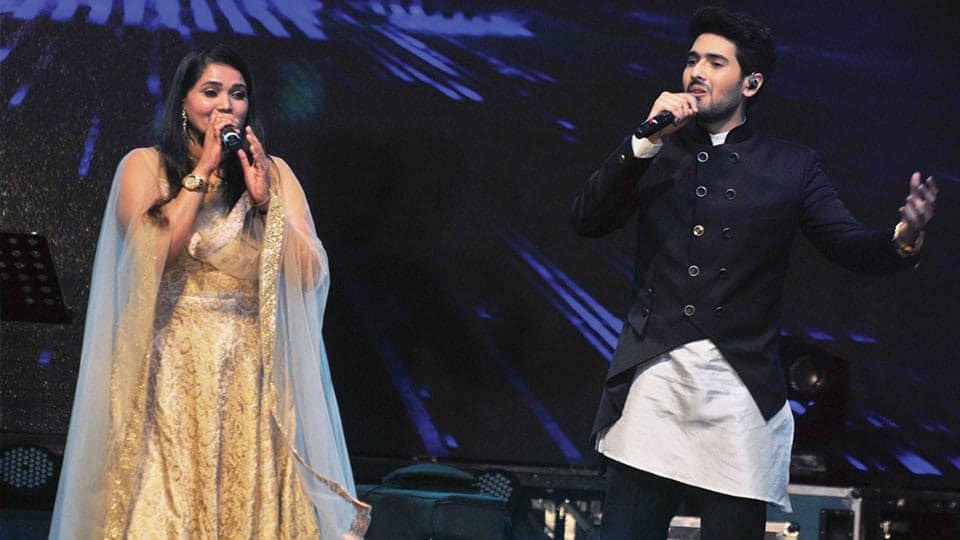 Mysuru:  The rain song ‘Ondu male billu, ondu male moda, hego jotheyagi…’ was so apt for the occasion. It was raining and nothing could stop this young singer Armaan Malik from singing one melodious number after another, even as the hugely youthful audience kept pace with him.

This was the third day of the Yuva Dasara at the Maharaja’s College Grounds yesterday. He was singing a mix of popular Hindi and Kannada film songs.

The song ‘Ondu male billu, ondu male moda, hego jotheyagi…’ from the movie ‘Chakravarthi,’ he sang with Kannada’s well-known singer Anuradha Bhat, sent the crowd into raptures as they sang along with the duo.

Armaan Malik sang the Arjun Janya music composed ‘Nodivalandava muttina male chandava…’ song for the first time on the Yuva Dasara stage as he shared his joy with the people.

Not to be left behind was Anuradha Bhat who has many melodious songs to her credit. The song ‘Nanu nodida modala veera balu kalidasa salahegara.. Appa I love you appa…’ from the movie Chowka, had the audience engrossed. Since this song depicts the special love a girl has for her father, it won the hearts of everyone even as they hummed ‘Appa I love you…’ along with the singer.

Armaan, who began the programme on time, sang till 11 in the night with his co-singer Anuradha Bhat almost non-stop without bothering about the pelting rain. The young and handsome Armaan, who has sung many songs in Kannada, won the hearts of the gathering as he began his concert with ‘Namaskara Mysuru Hegiggidira…’ and it went rapturous when he sang paeans about Kannada saying, ‘Kannada is a very sweetest language.’

Throughout the programme in spite of the rain, the young crowd clapped, whistled and applauded the singer Armaan Malik.

Dance feast: Earlier to this enthralling performance, the Yuva Dasara stage was set on fire by various dance troupes who virtually kicked up a storm. Mysuru’s Freakrazzz Dance Academy troupe began the dance in obeisance to Lord Ganapathi, Rama and Krishna and then went on to perform to the popular tunes ‘Tagaru banthu tagaru…’ ‘O gelaya jeevada gelaya…’ ‘Anna nanna ooru, anna nanna hesaru…’ displaying their dancing prowess, as even the Yuva School of Dance members danced to similar tunes.

Colours Dance Academy artistes matched steps to the songs ‘Aadu aata aadu, aadu aadu aadi nodu…’ ‘Kuladalli keelyavudo huchappa matadalli keelyavudo…’ and along with this they spread the message on atrocities on women.

Many college students, who were selected from Yuva Sambharama, danced to the tunes of national unity, women’s empowerment, State’s tradition and culture thus expressing their appreciation of the diversity in the country.

Silken touch: Models displayed various types of dresses at the fashion show organised by KSIC (Karnataka Silk Industries Corporation). Nearly 20 women wore the most attractive silk sarees, dresses and walked the ramp. Along with them, men in silk shirts, panche and shalya kept steps with the women.

The show by Palgudi and Mohan looked like stepping back to the time when the Silk Factory was set up 106 years ago by the Wadiyars, the rulers of Mysore and the world famous gorgeous silks that the factory is known for since then.

In short, the whole evening yesterday was a mix of song, dance, fashion and entertainment.