Home » News » Blame it on rain, Dasara Expo set to open in a jiffy 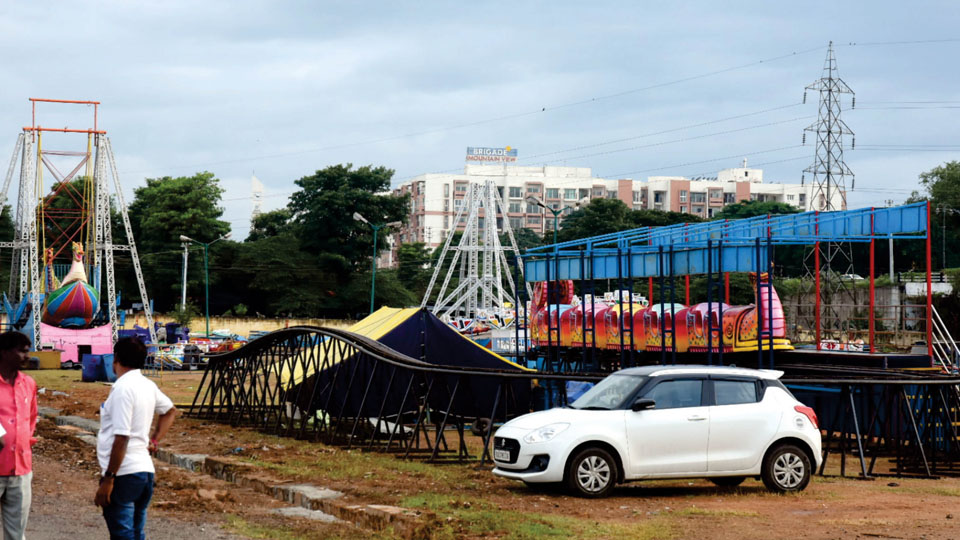 Blame it on rain, Dasara Expo set to open in a jiffy

Despite the common grouse of tourism stakeholders that apart from the Dasara procession and a few tourist attractions in and around Mysuru there is no permanent place in the city compelling tourists to stay back, the Dasara Exhibition fails to open on time. When the Dasara exhibition is inaugurated on the first day of the festival every year, empty stalls have been greeting the visitors.

The annual show, held at Doddakere Maidan, is a place for artisans drawn from across India to display and sell their exquisite products. It is also a place to exhibit Government schemes and programmes to make people socially aware.

Earlier, Dasara Exhibition would be actually ready when the Dasara celebrations began. Over the years, this practice stopped. This year, however, the exhibition will open on the day of Dasara inauguration. “Rain has dampened our plans to open the exhibition 20 days before Dasara,” said KEA Chairman Mirle Srinivasagowda.

“Over 32 stalls of the Government are being readied and the expo will open on Sept. 26. There will be over 250 stalls and food courts. All the minor works and occupancy by the vendors will be completed by Oct. 1,” he said.

This year, Mysuru District Minister S.T. Somashekar said Chief Minister Basavaraj Bommai has issued instructions to the officials at the Dasara High Power Committee meeting to ensure that the Dasara exhibition is opened 15 days before the start of the festival.

“We have told the vendors and all the Government Departments to set up the stalls and they are racing against time to complete the task. “Dasara exhibition could not be held during 2020 and 2021 due to the COVID-19 pandemic. The last Dasara exhibition was held in 2019. This year, we will make up for the two-year loss,” he added.

Bengaluru-based Fun World was the sole bidder for the exhibition contract and as such, the contract has been handed over to Rs. 8.09 crore. “Adults will be charged at Rs. 30 per person and children will be charged Rs. 20 and information about the exhibition can be obtained through an exclusive app. Video-mapping facility has been provided and the entire campus has been brought under a digital umbrella,” Srinivasagowda added.

As an added attraction, Cauvery Gallery has been inaugurated at the Exhibition premises and a separate section for sand art has been made. Cultural programmes will be held in two stages and local artistes will be given preference.

READ ALSO  An excellent simulation of Kurukshetra through Yakshagana

“The commercial stalls will feature a variety of items ranging from pottery and handicrafts to products of household necessities. Many cooperative weaving societies from Tamil Nadu, Jammu and Kashmir, Rajasthan, Himachal Pradesh and Bengal will sell their products including designer wear. A wide range of consumer items will also be available. Over 40 to 50 kiosks will be set up exclusively for food and snacks. The entertainment section will offer thrill rides,” he added.

3 COMMENTS ON THIS POST To “Blame it on rain, Dasara Expo set to open in a jiffy”