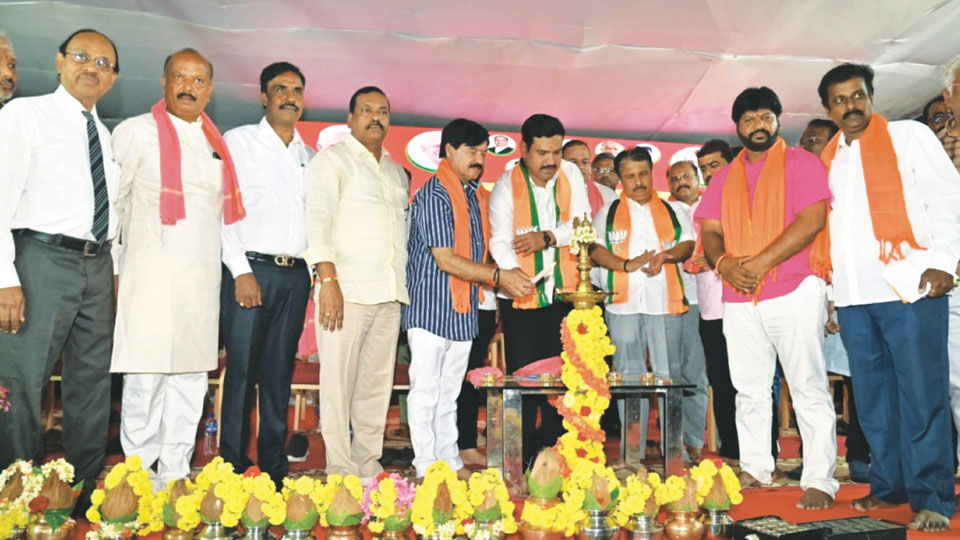 Mysore/Mysuru: Maintaining that the BJP is more focussed on rendering service to the people, rather than limiting itself to politics, State BJP Vice-President B.Y. Vijayendra said that KR MLA S.A. Ramdas is taking pains to ensure that Governmental benefits are delivered at the door step of every beneficiary.

He was speaking at the 5th day of the 9-day ‘Modi Yug Utsav-2022’ programme organised by Ramdas marking the 72nd birthday celebration of Prime Minister Narendra Modi, at Ramalingeshwara Park in Vidyaranyapuram here this morning.

Observing that Ramdas is a model leader to others, Vijayendra, who is also the son of former Chief Minister and senior BJP leader B.S. Yediyurappa (BSY), said that PM Modi, through his deeds, has shown how important good leadership is for a country’s growth. Contending that Modi has made every Indian proud, he said that the PM has shown the way to the world on how health  concerns, allround development, economic growth and such other issues be addressed.

Recalling the services of former CM Yediyurappa, Vijayendra asserted that BSY is a mass leader, who made contributions to all communities and sections of the society, while practicing the principles of social equality.

Stating that the people of Varuna Assembly Segment and Mysuru region have reposed great faith in him for which he is grateful, Vijayendra said that Ramdas is a Legislator who works  for the people and likes to be among the people always. “I will continue to work honestly in keeping with the great affection shown by the people of the region,” he added.