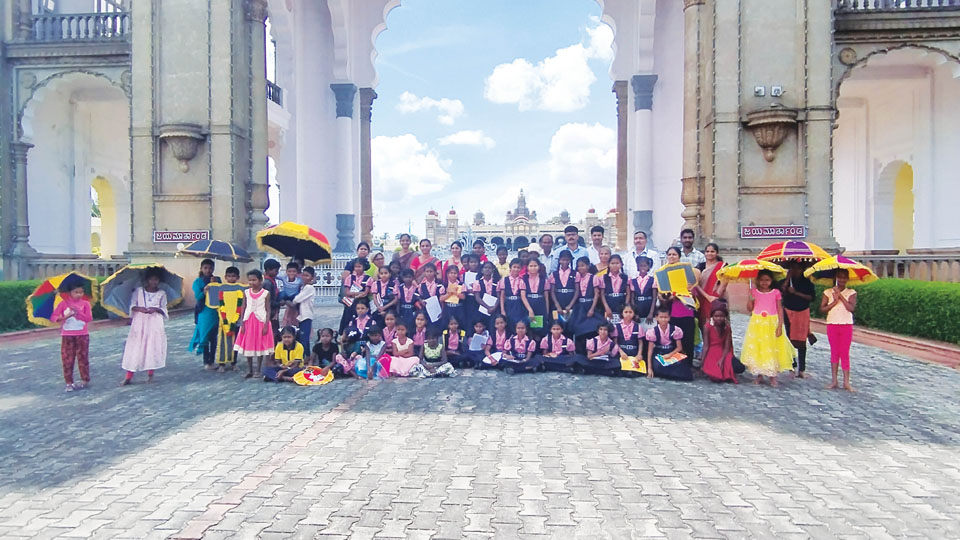 Mysore/Mysuru: Children of Mahouts and Kavadis who are housed at the Mysore Palace where they are indulging in activities including study and play had special visitors yesterday where children from Shaktidhama at the foot of Chamundi Hill interacted and exchanged ideas.

The special Tent School visit was organised for the children of the same age group who are studying in different locations to meet with each other and spend some time. The children who are studying from third to fifth standard from Shaktidhama were brought to the Palace in a school bus.

The children displayed what they have learnt in the schools and the forest children sang songs and narrated certain aspects of their books that they learnt at the Tent School all these days. Several dances too were performed. After the interaction, the Shaktidhama children were taken near the elephant shelters where they had a chance to see the gentle giants in close proximity. Teacher Manjula of Shaktidhama, RFO Santosh Hoogar, School Nodal Officer Manjula, teachers Noor Fathima, Subbalakshmi, Mousin Taj, Mahadev and others were present.

Mahouts and Kavadis Mysore Palace Shaktidhama
Blame it on rain, Dasara Expo set to open in a jiffy
Dr. K. Subramanya of Sharada Surgery and Cryo-Surgery Centre passes away