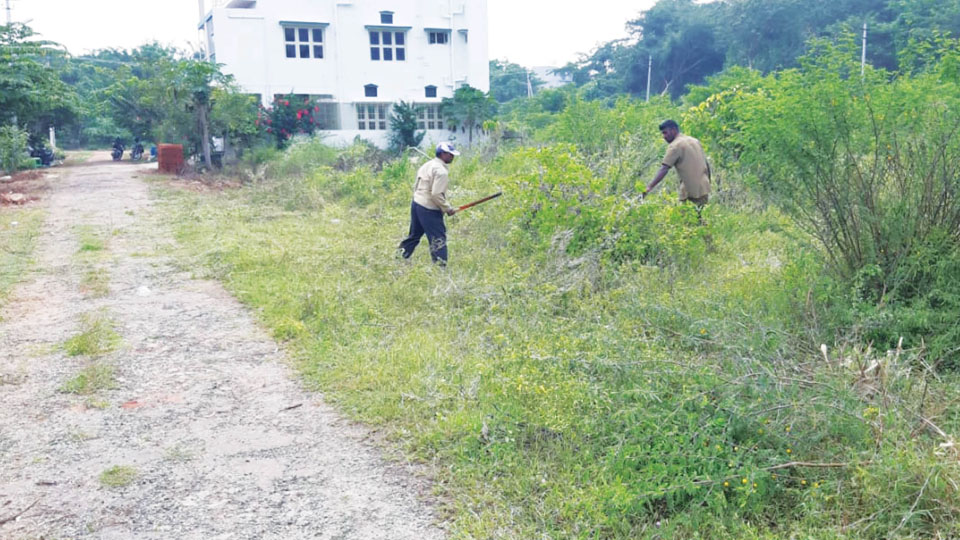 Policemen who faced Veerappan forced to live with snakes, scorpions: MUDA takes up clearing of bushes, weeds at Hanchya-Sathagalli ‘B’ Zone Layout

Mysore/Mysuru: The Mysuru Urban Development Authority (MUDA) has initiated steps to solve the problems faced by Policemen at Hanchya-Sathagalli ‘B’ Zone Layout by launching an operation to clear overgrown bushes and weeds at the Layout.

Star of Mysore had published the news item under the headline ‘Policemen who faced Veerappan forced to live with snakes, scorpions’ on Nov. 9.

MUDA Zone-8 Assistant Executive Engineer H.P. Shivanna and Assistant Engineer Sampath, who visited the Layout yesterday, said that repair works of roads and drains in the Layout will be taken up within two months and assured of solving the problems caused by Raja Kaluve soon.

MUDA staff, who had accompanied the Engineers, cleared the overgrown bushes and weeds grown in plenty in the Layout. The staff of Visvesvaraya Technological University (VTU), adjacent to the Layout, said that the problems caused by the drain would be rectified soon.

Meanwhile, retired Sub-Inspector (SI) D.R. Jayaswamy, a resident of Hanchya-Sathagalli ‘B’ Zone Layout, speaking to SOM, said that the problems will not be solved by just clearing bushes and weeds; the drains and roads must be widened.

Pointing out that the MUDA officials have been telling that the works will be taken up within two months since two years, the retired SI said that the Layout also lacks proper streetlight facility.

“If the MUDA did not take up the repair works within two months, all the residents of the Layout will stage a protest in front of MUDA Office as we have suffered a lot since three months,” he added.

It may be recalled that the apathy of MUDA officials has turned the  Hanchya-Sathagalli ‘B’ Zone Layout in the outskirts of city into a shelter for snakes, scorpions etc., forcing the brave Police personnel, who had taken part in Anti-Veerappan operations to live with these creatures.

Also, recent rains that lashed across the city continuously has flooded the Layout along with sewage water causing unbearable stench.