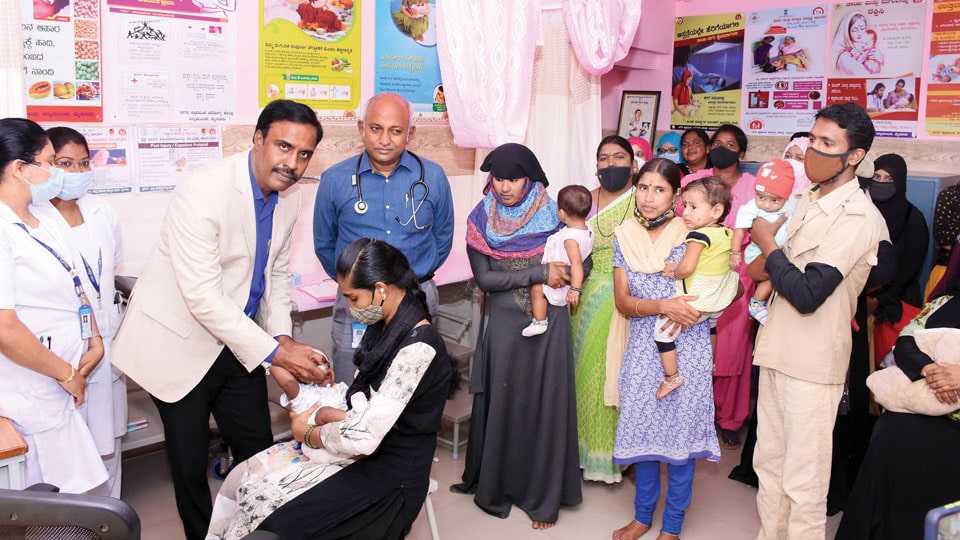 World Immunization Day is celebrated every year on Nov. 10  to make people aware about the importance of getting timely vaccinations. District Health Officer (DHO) Dr. K.H. Prasad launched a programme at the Primary Health Centre (PHC)  in Bannimantap this morning, where kids were symbolically administered polio drops.

Dr. Prasad told Star of Mysore that the Health Department in association with MCC is observing the day by administering polio drops to children in a special drive. Pointing out that an awareness campaign has been launched during which the people are sensitised on getting their children vaccinated for immunity against diseases, he said that periodical administration of polio drops to children has helped in bringing down polio cases.

Maintaining that the Health Department has set a target of vaccinating 24 lakh people in the district, Dr. Prasad said he was hopeful of achieving this target soon, with the district having enough stocks of the vaccine.

The DHO said that Gram Panchayat members in all Hoblis have been directed to create awareness among the population in their respective limits on the importance of administering polio drops to their children   and also to ensure that adult population who have so far defaulted on vaccination, get vaccinated for their own health and safety. With the number of people eligible for their second dose of vaccination rising since the past four days, the Health Department has taken adequate measures to meet the demand, he added.