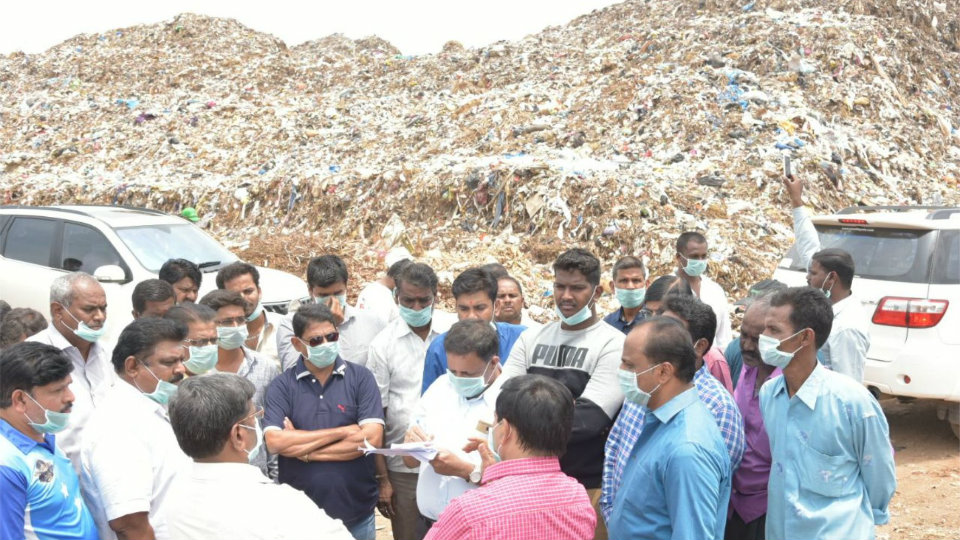 Mysuru: The Sewage Farm and the Excel Treatment Plant at Vidyaranyapuram is back in news after a break of three months. This time, it is the visit of Central Pollution Control Board (CPCB) officials, who inspected the plant on Thursday and took objections to the unscientific way the waste is being treated.

The CPCB officials visited the Sewage Farm following a complaint by former Minister and BJP leader S.A. Ramdas who had informed the CPCB that waste is being unscientifically disposed of and tonnes of animal waste are being indiscriminately dumped. This is causing untold misery to the residents of the surrounding areas as unbearable stench is emanating from the place, Ramdas complained.

The former Minister had also told the CPCB that despite many complaints to the Mysuru City Corporation (MCC) and the elected representatives, nothing has been done to solve the problem. He had complained that the air and water pollution levels in the area were very high and the prime reason for this was the Sewage Farm.

The CPCB officials, who arrived in city on Thursday morning, visited the plant and first they visited the manure making unit. Later, the team visited the dumping yard and recorded that over 7 lakh metric tonnes of waste has not been processed. Samples from borewells around the area were collected to determine if the ground water was polluted.

MCC Health Officer Dr. Nagaraju, who was to brief the team about the waste treatment process, arrived late at the venue. Seeing the officer, residents of the area who were complaining to the CPCB officials about unbearable stench, questioned Dr. Nagaraj about the delay in his arrival. The residents alleged that the MCC was not making any efforts to solve the issue.

The CPCB officials noted that the plastic waste that is supposed to be destroyed was being dumped unattended. Though the officials questioned about the improper way the waste is being segregated and disposed of, Dr. Nagaraj told them that the MCC will later submit the answers in writing.

Speaking to reporters, Ramdas claimed that the CPCB officials had directed the MCC to solve the problem of unscientific disposal of waste by April 3. He said that the State Unit of the CPCB and the MCC have been asked to take steps to ensure that the residents are not inconvenienced after April 3.

He recalled his protest in December 2017 on the same issues and said that the District Administration had assured him that the issue would be solved within three months. Despite the assurance, nothing has been done, forcing him to approach the CPCB, he said.

He said that there were nine waste treatment units in Mysuru and only four of them are functioning. “However, the MCC has claimed that all the units were functioning to get Rs. 32 crore grants under Swachh Bharat Mission,” he alleged.