Home » Columns » Do we have a City Corporation ? 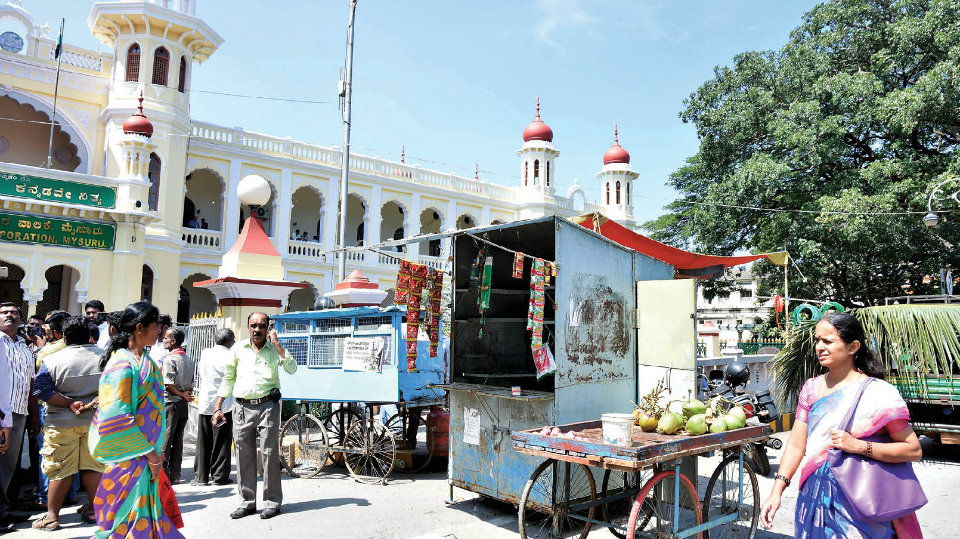 Do we have a City Corporation ?

I ask this question simply out of frustration that overcomes me when I see how neglected our city is across its entire length and breadth these days. Our roads are in their most miserable state ever. Over the years that have gone by, before every Dasara, we used to see them being resurfaced if they happened to be the main thoroughfares frequented by our tourists or at least patched up if they happened to be the ones used by lesser mortals like you and I.

But over the past two Dasaras we have not seen this basic courtesy being extended to them even half-heartedly, let alone in full measure. Even some of our most important roads are in utter shambles today. For instance, try to drive down our most centrally located Ashoka Road from the St. Philomena’s Church to the Central Police Station and see how violently you get tossed, both up and down and from side to side too. Someone would be doing some real public service if they put up two sign boards at either end of this stretch, warning pregnant ladies not to take this road even if their destination is a maternity hospital. They would otherwise be in the all too real danger of going into precipitate labour well before reaching their destination!

The brand new Irwin Road that was promised to us before this year’s Dasara, through bold newspaper headlines, simply did not materialise due to bureaucratic bungling that spawned a spate of law suits. How much time the resolution of these disputes is going to take is hard to say going by the inherent tardiness of our loophole-infested legal system.

The half-completed widening process of Hyder Ali Road has left a gaping eyesore in the foreground of the majestic Government House, our oldest heritage structure. The building looks like a beautiful maiden clad in miserably tattered robes.

Our Rangacharalu Memorial Town Hall, another iconic and no less imposing edifice, named after one of our most illustrious Dewans, is mired in an utterly messed up construction activity that reeks of wrong planning and shameless greed. Its grounds and surroundings are now the biggest den of every kind of immoral activity both by day and night. What goes on in the ill-conceived and half-finished underground parking lot there is anybody’s guess. The saddest part of this sorry state of affairs is that this landmark that has now literally been relegated to the dustbin of time stands so close to our Palace whose majestic looks it should have complemented like the way it did until we decided to meddle with it.

Citizens who now go round in endless circles trying to find parking place for their vehicles are only reassured from time to time that paid parking will be introduced in our city soon. But this has never materialised although we were told years ago that electronic parking meters have been acquired by the City Corporation. Our city is being managed so badly these days that it is a ‘free-for-all zone’ where anyone can do anything without anyone asking any questions. Anyone can throw garbage anywhere, anyone without a sense of shame can urinate and even defecate in any by-lane or vacant site and anyone can set up shop just about anywhere.

The rampant conversion of our footpaths into hawking zones is going completely unquestioned. Today most of our footpaths are meant for anything but walking. Tax-paying citizens who happen to reside on such roads have to bear the brunt of the medley of sounds and smells that emanate out of the myriad business activities that thrive literally on their doorsteps, robbing them of the tranquillity that is rightfully theirs in a civilised set up.

Today anyone armed with a tray or a push cart and a devil-may-care attitude can start his or her commercial enterprise on any footpath, public or private vacant space and tell the citizens to go to hell with their sense of outrage. It is eminently clear that along with these illegitimate entrepreneurs our elected ward representatives and all those manning the civic administration of our city too are the beneficiaries of this kind of commerce. Otherwise what prevents them from doing justice to the posts they hold and the fat salaries they draw?

I wonder what need there is for them to stage their annual shameful drama of trying to get the ‘Cleanest City’ tag for our city by hoodwinking the inspection teams. Yes, hoodwinking is the only word for it. It is not an overstatement. By what other name can you call this frantic exercise of pushing our otherwise overflowing garbage under the carpet and cajoling all our roadside entrepreneurs to shut shop and stay out of sight for twelve days in a year and then let them loose for a full twelve months after the inspection is over?

That is exactly what we saw a few months ago with a sense of relief which only turned out to be very short-lived. All the evil that we thought had vanished was very quickly back where it was. It is really commendable that in this kind of a sordid situation, one of our Corporators, K. V. Sridhar with a handful of concerned citizens thought of drawing attention to our sad plight by organising a protest in a unique and novel way. Albeit for a short while, he created a hawking zone right in front of our City Corporation Office which at least prompted our Corporation Commissioner to come down from his lofty perch and accept a memorandum from outraged citizens if not anything more.

I am not too sure if this will nudge the authorities awake and impel them to start acting against every kind of public nuisance that robs us of a dignified existence in the city we call ours and pay hefty taxes for its upkeep. But I am sure that if we all stand up to proclaim our rights and raise our voices to tell all those who pretend to be deaf and blind that we as tax-paying citizens will not tolerate a sub-standard existence we will certainly score a goal. But mind you, it is entirely up to us!

3 COMMENTS ON THIS POST To “Do we have a City Corporation ?”