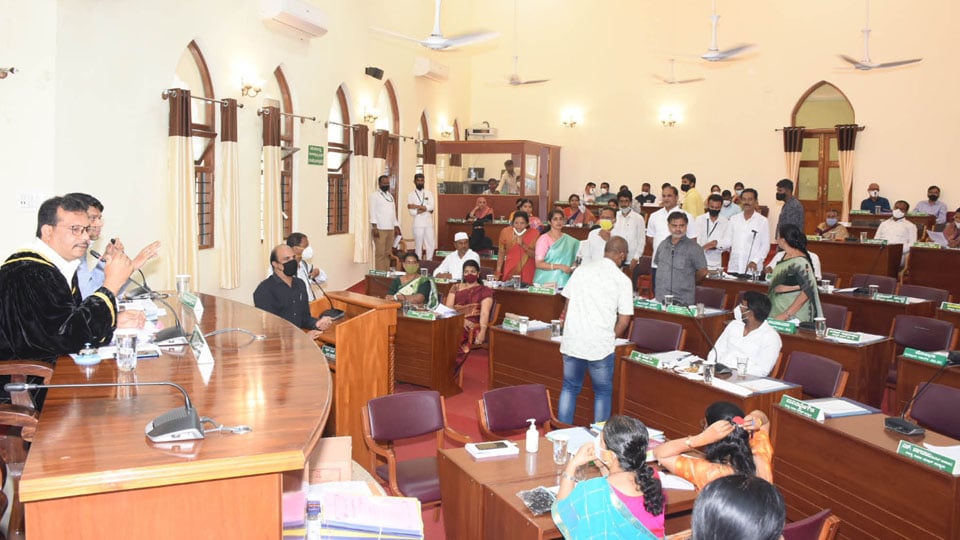 Mysore/Mysuru: The continued MCC Council meeting that began at the Main MCC Office on Sayyaji Rao Road this morning, saw a war of words between Corporators from the ruling JD(S)-Congress combine and the opposition BJP over Pourakarmika issue, with Corporators from both the ruling and opposition benches trooping into the Well. The previous meeting was held on Aug. 3.

Soon as the meeting began, BJP Corporators raised the issue of lack of cleaning and maintenance of hygiene in the wards represented by them. They took the ruling combine to task for lack of Pourakarmikas and inadequate execution of works and wanted to know what the concerned MCC officials were doing in this regard, when their duty is to ensure that the city is kept clean.

Defending the Pourakarmikas saying they too are human beings and have done excellent work following the outbreak of COVID-19 pandemic last year, Shantamma said that even Prime Minister Narendra Modi has washed the feet of a Pourakarmika in a display of respect for them.

Strongly opposing Shantamma’s remark, K.V. Sridhar of JD(S) reacted angrily saying that the Prime Minister does such things only for the sake of votes.

MCC Commissioner G. Lakshmikantha Reddy and other officials were present.