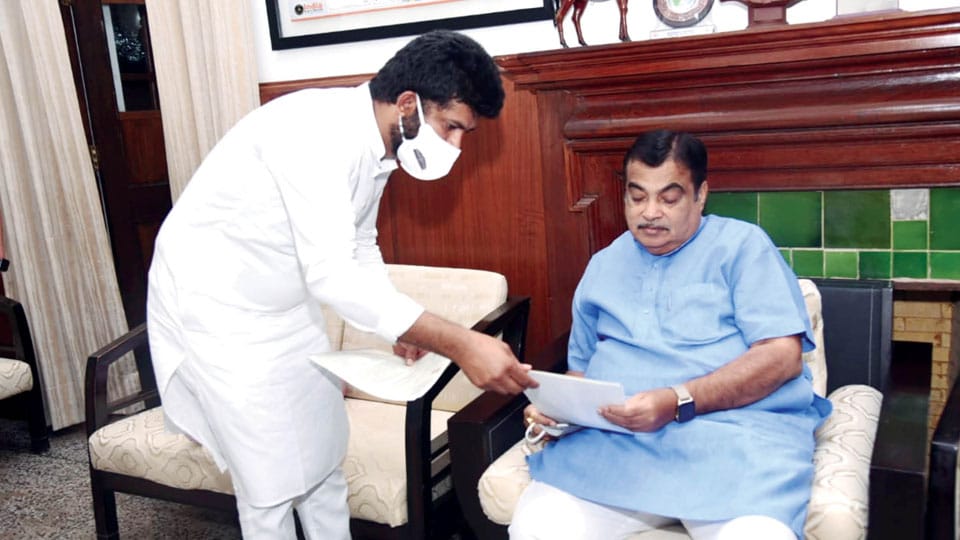 ‘Kollegal-Kerala Highway needs to be six-lane’

Mysore/Mysuru: Mysuru-Kodagu MP Pratap Simha has urged Union Minister of Road Transport and Highways Nitin Gadkari to develop the Kollegal to Kerala Highway from the existing four-lane to a six-lane one. National Highway 766 (NH-766) (previously NH-212) connects Kozhikode in Kerala with Kollegal in Karnataka.

Submitting a memorandum to the Union Minister in New Delhi, the MP said that the Highway was developed into a four-lane in 2016. “The developed section cannot hold the present traffic volume considering the construction of Multi Modal Logistic Park by the Container Corporation of India at Kadakola Industrial area,” the MP noted.

Further, Simha said that the Mysore Airport at Mandakalli village, movement of industrial, tourist and commercial vehicles from Mysuru towards Ooty and Kozhikode calls for six-laning of the Highway which at present cannot effectively handle the traffic density, he said. The MP urged the Minister to instruct officers to initiate the preparations like engagement of DPR consultant for the project.

The NH-212 (now NH-766) was developed by the State PWD National Highways wing in 2016 and was handed over to National Highways Authority of India (NHAI) in 2019 for toll collection. “But the stretch was given to NHAI with half-done/ incomplete land acquisition and civil work in Mysuru city limits and the land compensation for many of the survey numbers were not paid to beneficiaries till now,” Pratap Simha said.

A revised estimate has been prepared by Karnataka and has been submitted to the Transport Ministry for approval which is still awaited. As such, land compensation and payment is pending for the completed civil and utility works. “The delay is leading to many legal complications and the revised estimates must be approved at the earliest,”  Pratap Simha said.

The MP also pitched for the construction of a service road from K. Kodihalli to Maddur town at 120.650 kms on the Bengaluru-Mysuru section of NH-275 that is being upgraded as a 10-lane Highway.

The development of the access control Highway with service roads on both sides is under progress and going at a good speed. But the villagers of K. Kodihalli, Agarliganadoddi and Hunasamaranadoddi and other villagers are facing the problem of service road discontinuity from K. Kodihalli to Maddur town. They need to use the existing road for 7 kms to join the under-construction service road. As such, the continuity of the service road for a length of 300 metres is essential, the MP told the Minister.

One more underpass provision has to be made at T.M. Hosur junction at 120.650 kms as the villagers have to travel 7.1 km towards Bengaluru and 2.6 km towards Mysuru side to reach the other side of the village, the MP told Nitin Gadkari.