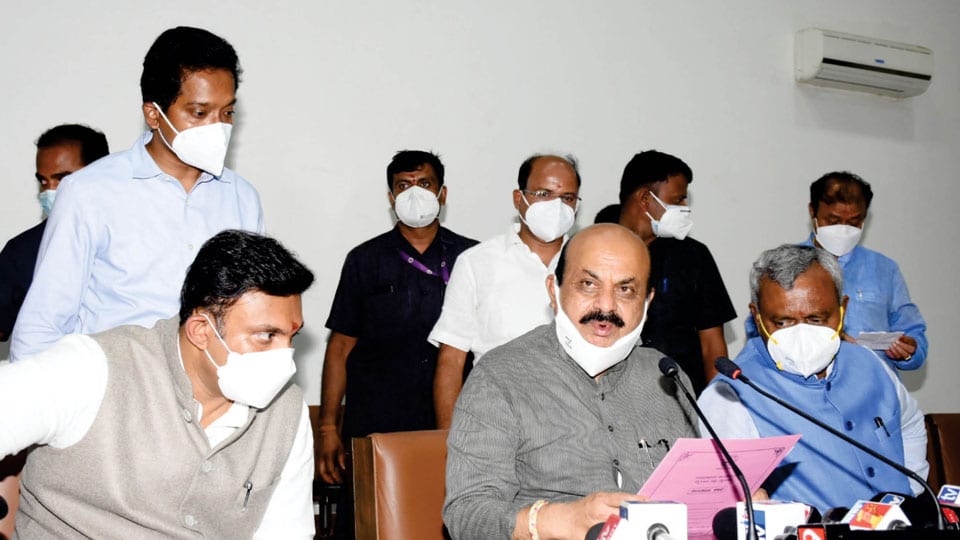 COVID to be micro-managed at Primary Health Centres: CM

Mysore/Mysuru: After holding a review meeting with officials of the District at Zilla Panchayat Hall yesterday regarding COVID scenario, battle-readiness for third wave and also vaccination target, Chief Minister Basavaraj Bommai outlined a slew of measures to mitigate the effects of future waves of the pandemic. COVID management will shift to smaller geographies instead of a district-level management. This micro-management will be at the level of Primary Health Centres (PHCs) at all places where children between the age group of 6 and 16 would be screened.

“I have asked Deputy Commissioner of Mysuru Dr. Bagadi Gautham to hold a children’s health camp in all Schools in each village and they will be checked for malnutrition and undergrowth. Such children will be provided nutritious food and supplementary vitamin boosters from the Women and Child Welfare Department and Health Department,” the CM said.

COVID Care Centres will be opened at village and Taluk level and all facilities would be provided to the respective administrations. Testing of children will also be done at the PHC level, he added. “We will ensure that immunity among children is high so that other diseases associated with COVID-19 and also COVID per se are effectively combated,” he said.

The seven-day average Test Positivity Rate (TPR) in Mysuru was 1.19 percent and the last seven days had seen a total of 763 cases, besides 20 deaths. During the last one week, a total of 1.26 lakh people had been vaccinated in the district, the CM noted. Presently, 9,000 tests were being conducted in Mysuru district every day, he said.

On vaccination, the CM said that the Centre has assured to increase Karnataka’s share of vaccines from 65 lakh to one crore per month. “I met the Union Health Minister in New Delhi and sought an increase in the allocation and the Minister assured me that Karnataka will receive one crore doses during August. Also, I requested the Health Minister to increase the allocation to 1.5 crore from September so that five lakh doses can be administered daily,” he said.

The CM instructed authorities in border districts to prioritise vaccination to people residing in border areas and inoculate the personnel manning the gates.

Of the 14 oxygen generators sanctioned to Mysuru, three were functional and six are likely to be commissioned soon. “I will ask the Health Commissioner in Bengaluru to immediately arrange for five more oxygen generators for Mysuru. Separate arrangements were also underway to ensure medical oxygen for ICUs.  On its part, the District Administration has sought 20 ICU ventilators for children and they will be procured from Bengaluru and handed over to the DC.

On Dasara celebrations, Bommai said that the decision would be taken in Bengaluru after ascertaining the prevailing situation in October and also in consultation with the COVID Task Force.