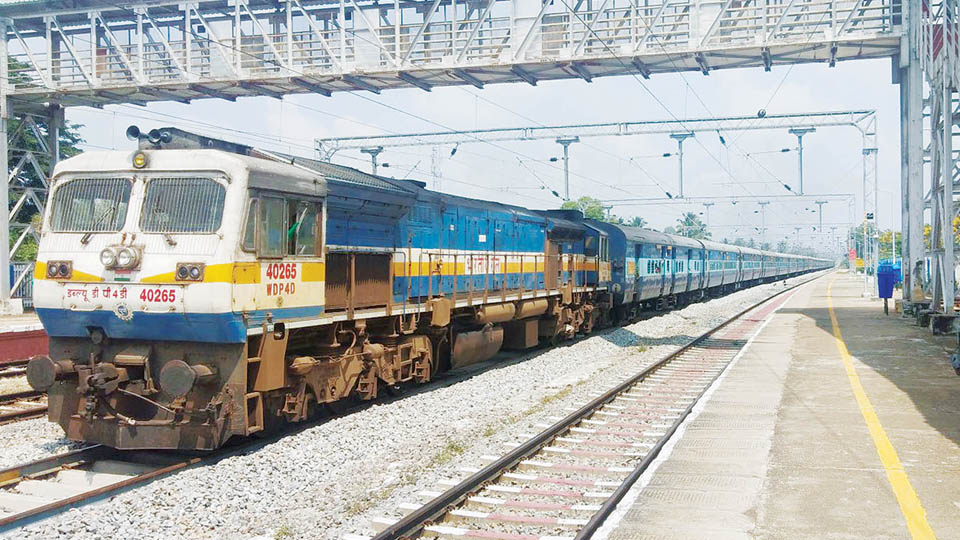 Mayiladuturai, Tuticorin and Hampi Express held up for over an hour

Mysuru: Failure of Overhead Equipment (OHE) as a result of the tripping of Overhead Traction Cable between Pandavapura and Mysuru (Yeliyur Power Station) delayed three electric trains plying between Mysuru and Bengaluru this morning, severely inconveniencing office-goers and tourists heading towards Mysuru for Dasara. However, the snag was noticed and repaired by electrical engineers and technicians.

The incident occurred early in the morning at a time when most of the regular train travellers arrive at the City Railway Station and the Krantivira Sangolli Rayanna Station in Bengaluru. Trains that leave Bengaluru between 6 am and 6.20 am were affected and the delay was between 50 minutes and one-and-a-half hours.

Only electric trains were affected while the diesel locomotives travelled between the two cities as usual. Railway officials told Star of Mysore that while the Mayiladuturai Express was held up at Naganahalli Railway Station for over one-and-a-half hours, both Hampi Express and Tuticorin Express were held up midway for over 50 minutes.

Soon after the cable tripped, messages were passed on to the electric locomotives to halt and the diesel locomotives not to take the track where the electric locos were stationed. Safety measures were ensured and a team of electrical engineers and technicians rushed to Yeliyur Power Station (grid) set up by the Railways and rectified the snag. The trains resumed their journey after 10.30 am.

Though Railway officials said that it was a technical snag, passengers did not take the delay lightly. Prashanth, a regular traveller from Bengaluru to Mysuru, told SOM that invariably every train starts 10 to 15 minutes late from Bengaluru. “As it is a crucial section, Railways must ensure that such delays do not occur. I am sure that they have a mechanism to check the lines before a train leaves a station,” he said.

A tourist couple from Columbia said that they had planned their schedule to Mysuru well in advance. “All event timings are available online and we have planned our packed our schedule as per the timings and took a flight to Bengaluru and a train to Mysuru. The delay is unexpected. Such delays can be avoided and there are technologies to do that,” the couple said.