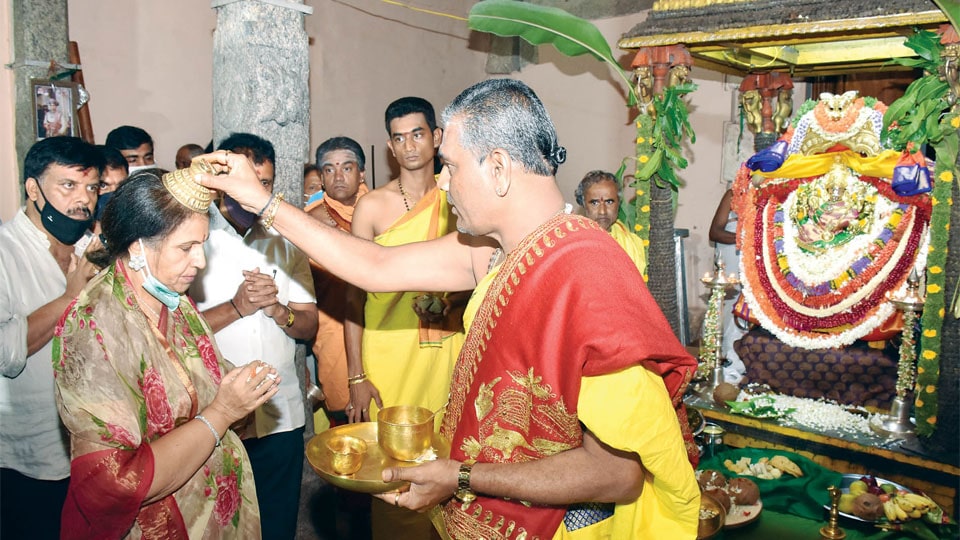 Mysore/Mysuru: Chamundeshwari Vardhanti Mahotsava was celebrated atop Chamundi Hill without much fanfare yesterday as only Temple staff and a few devotees were allowed to attend the traditional rituals, in view of COVID-19.

Marking the Vardhanti (birthday) Mahotsava, special rituals began early in the morning with priests performing Sankalpa, Panchamrutha Abhisheka, Sahasranamarchane, Ashtothara etc. The ritual activities seemed in tune with Nadaswaram being played by traditional musicians specially invited for the occasion. Later, torch lights were lit and ceremonial salutes were offered to the deity by Police Band and other teams.

Member of erstwhile Royal family Pramoda Devi Wadiyar, who was present for pujas from wee hours, bowed to the Goddess and sought her blessings.

Speaking to SOM, Pramoda Devi Wadiyar said, “While taking Sakalpa this morning in front of the Goddess, I prayed to Mother Chamundeshwari to seek her blessings. People need not fear. Mother Goddess is there to protect us, especially those who trust her. With her blessings, we will come out stronger in this scary situation.”

Temple Chief Priest N. Shashishekar Dixit said, “On the occasion of Chamundeshwari Vardhanti Mahotsava, every year, we conduct Durbar Utsava in the temple here. According to the tradition, today, our presiding deity Chamundeshwari Devi holds Durbar in the temple. All her devotees seek her blessings on this special occasion and pray for welfare of mankind.”