Home » News » Preparations on to welcome President in Chamarajanagar tomorrow 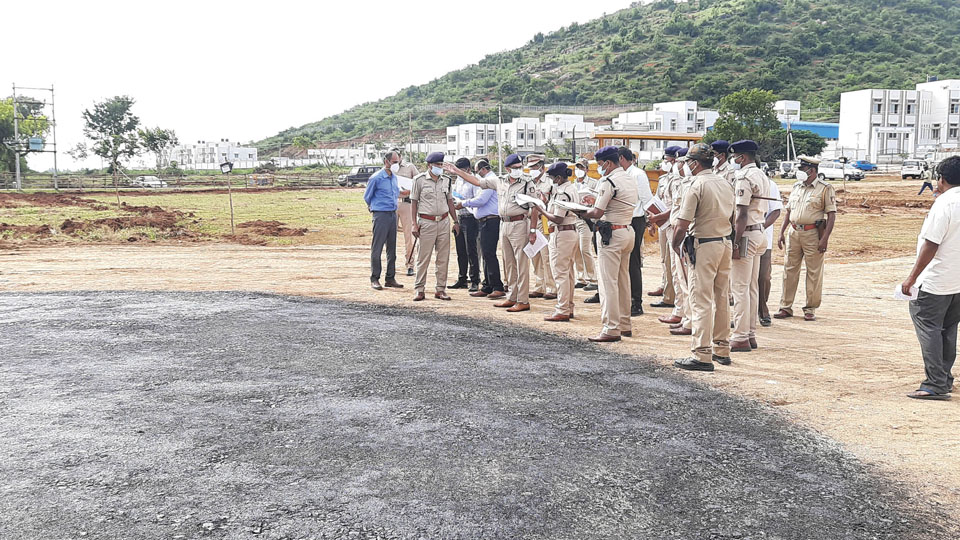 Preparations on to welcome President in Chamarajanagar tomorrow

Yalandur/Chamarajanagar: Hectic preparations are on to welcome President Ram Nath Kovind to Biligiri Rangana Betta (B.R. Hills) on Oct. 7 (tomorrow). A helipad has been readied at Vadagere village and it has been tested by Indian Air Force (IAF) helicopter team.

Kovind will be the second President to visit Chamarajanagar after A.P.J. Abdul Kalam, who celebrated his 76th birthday with the tribals at B.R. Hill in October 2006.

Southern Range IGP Pravin Madhukar Pawar visited the helipad yesterday and inspected the landing and take-off arrangements. The helipad has been constructed at Vadagere under Gowdalli Panchayat on the campus of Kittur Rani Chennamma Residential School. Three landing points have been set up on the campus.

The IGP inspected the security measures from the landing place till the B.R. Hills Temple where the President is scheduled to visit. He asked Superintendent of Police Divya Sara Thomas about the blockages of roads to enable smooth movement of the President’s cavalcade.

The IAF team had come to the helipad to practically test the landing and take-off measures with a chopper and also inspected a back-up helipad constructed at Yedapura village.  President Kovind will arrive in Karnataka for a three-day visit to attend various events.

On Thursday, he will arrive at Mysore Airport at Mandakalli in a special flight at 10.40 am and the CM will receive him. He will later visit B.R. Hills.

Preparations are in full swing at the super speciality hospital at Chamarajanagar. The 450-bed hospital is expected to ease the problems of the people, who had to travel to Mysuru and other cities for advanced medical care. The hospital has been constructed at a cost of Rs. 162 crore. It will be open for the public and the outpatient department will begin functioning the next day after the formal launch.

Over 750 students are pursuing the MBBS course and there are 100 B.Sc. Nursing students, 40 General Nursing and Midwifery (GNM) students and 80 Paramedical students.

As per the schedule, the President will be staying overnight in Mangaluru on Thursday and Friday. On Friday morning, Kovind will leave in a special helicopter for Sringeri Mutt and Temple in Chikkamagaluru district where he will pay obeisance to the presiding deity. He will leave for New Delhi on Saturday morning.