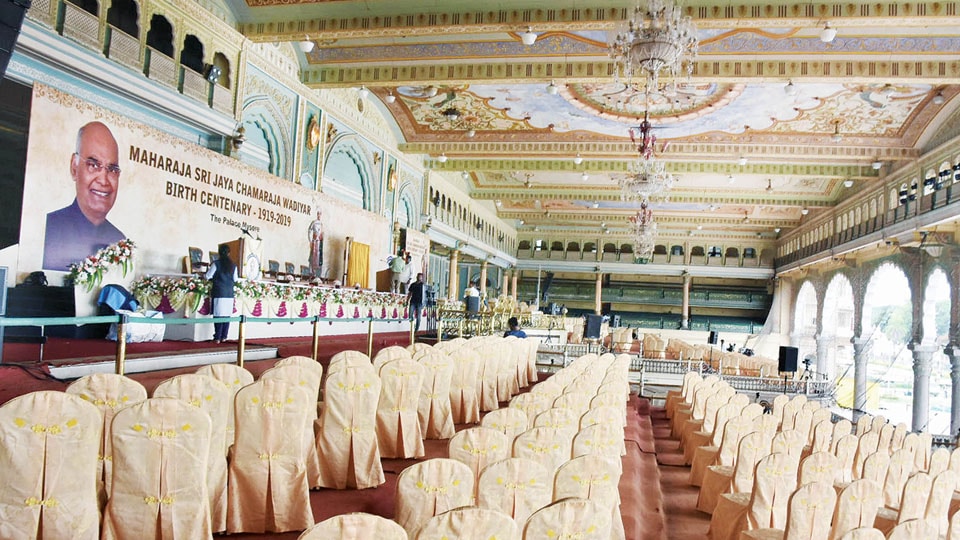 Mysuru:  Mysuru is all set to receive President Ram Nath Kovind who will be on a two-day visit from today. This will be his first visit to Mysuru. Elaborate arrangements have been made to ensure that the VVIP visit passes off glitch-free.

At Mysore Palace, President Kovind will release the book ‘Srividya Sankirtana Sudhalahari’ comprising 94 Karnatak music compositions of JC Wadiyar, published by Srikantadatta Narasimharaja Wadiyar Foundation. He will also unveil the plaque for University of Mysore’s ‘Sri Jayachamaraja Wadiyar Centre for Higher Learning’, to be developed on a 22-acre land donated by the late king at the foot of Chamundi Hill.

Tomorrow (Oct. 11), the President will visit the famed Srikanteshwara Temple in Nanjangud at 8.30 am and pray to Lord Srikanteshwara (Nanjundeshwara). At 9.45 am, his convoy will then move to Chamundi Hill where he will seek the blessings of Goddess Chamundeshwari.

He will return to Government Guest House later. At 4 pm, Kovind will lay foundation stone for the new Global Campus of JSS Academy of Higher Education and Research (JSS AHER) at Varuna village in Mysuru taluk.

Following this, he will travel on road to Mysore Airport from where he will board the special flight to New Delhi at 5.35 pm.

Following the President’s visit, the City and District Police have tightened security at Mysore Airport, Government Guest House, Palace, Chamundi Hill, Srikanteshwara Temple and Varuna village. This local security apparatus is separate from the Z-Plus Security accorded to the VVIP.

Over 60 armed and unarmed personnel led by DCP (Law and Order) M. Muthuraj have been deployed at the Mysore Airport. This apart, Police have been stationed around the Airport compound and at Air Traffic Control Tower.

Central Intelligence Bureau, State Intelligence, Anti-Sabotage Team, Bomb Disposal and Detection Team, Dog Squad have conducted thorough checks at all locations of Presidential visit. Police personnel will be deployed throughout the route covered by the President’s convoy. They have searched the Government Guest House and rooms have not been allotted to other guests for security reasons.

Security arrangement near Varuna village is being supervised by Additional SP P.V. Sneha and SP C.B. Ryshyanth. CCTV cameras have been installed at various points and round-the-clock monitoring would be done.

The District Police have tightened security at Srikanteshwara Temple in Nanjangud. The temple is being guarded by about 400 Police personnel including five Dy.SPs, 10 Circle Inspectors and 15 Sub-Inspectors. This morning, devotees were being allowed inside the temple after thorough check. However, their entry will be restricted from 6 am tomorrow till the President leaves. Entry for devotees has also been banned between 9.45 am and 11.45 am at Chamundeshwari Temple tomorrow.

Similar restrictions have been imposed on the roads connecting Mysore Palace, Srikanteshwara Temple and Chamundi Hill.