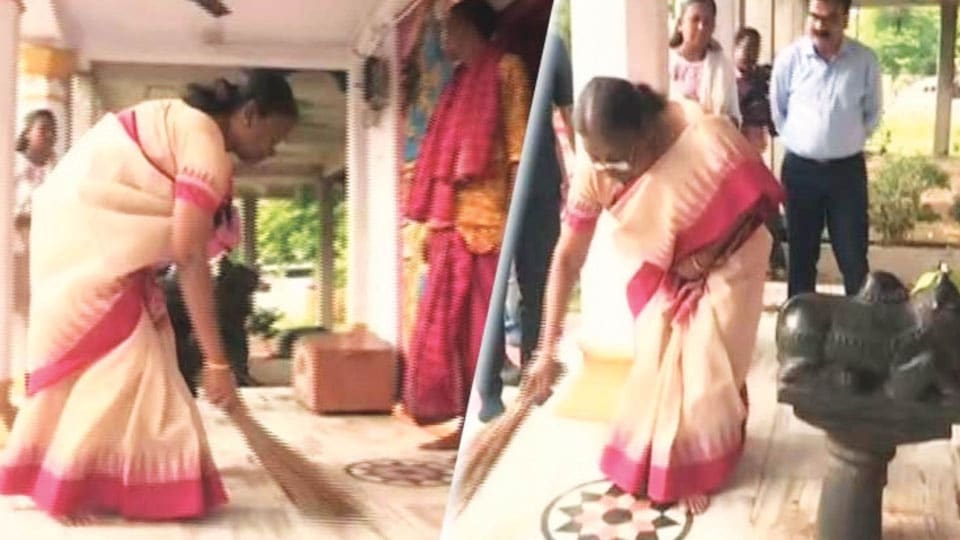 Bhubaneswar: Former Jharkhand Governor Droupadi Murmu this morning swept the floor of the Shiva Temple in Rairangpur of Mayurbhanj district before offering prayers after being nominated by the BJP-led NDA as its Presidential candidate. She has been provided Z-Plus category security by the Centre.

BJP Chief J.P. Nadda announced Murmu’s name yesterday. Murmu is likely to file her nomination papers on June 25. Murmu, who hails from Odisha, becomes the first woman tribal leader to contest for the country’s highest constitutional post. Before this, she also holds the record of being the first tribal woman Governor in the country.

Accompanied by friends and some family members, 64-year-old Murmu visited the temples of Lord Jagannath, Hanuman and Shiva in Rairangpur, the place from where she was first elected as an MLA in 2000.

Born on June 20, 1958, in Odisha in a simple Santhal tribal family, Murmu started her political career in 1997. She was elected Councillor of the district board in Rairangpur in 1997.

She has been MLA twice in Odisha and also got a chance to work as a Minister in the Naveen Patnaik Government. Murmu was also awarded the Neelkanth Award for Best Legislator by the Odisha Legislative Assembly.

After the completion of her tenure, she left the Jharkhand Raj Bhavan for her village in Odisha’s Rairangpur on July 12, 2021, and is living there since then.

Opposition Presidential candidate Yashwant Sinha will file his nomination on June 27 at 11.30 am. Former Union Minister Sinha has been chosen as the consensus candidate from the Joint Opposition for the upcoming Presidential elections which will take place on July 18, 2022.

Expressing his gratitude to West Bengal Chief Minister and TMC chief Mamata Banerjee, Sinha tweeted said,  “I am grateful to Mamata for the honour and prestige she bestowed on me in the TMC. Now a time has come when for a larger national cause I must step aside from the party to work for greater opposition unity. I am sure she approves of the step.”