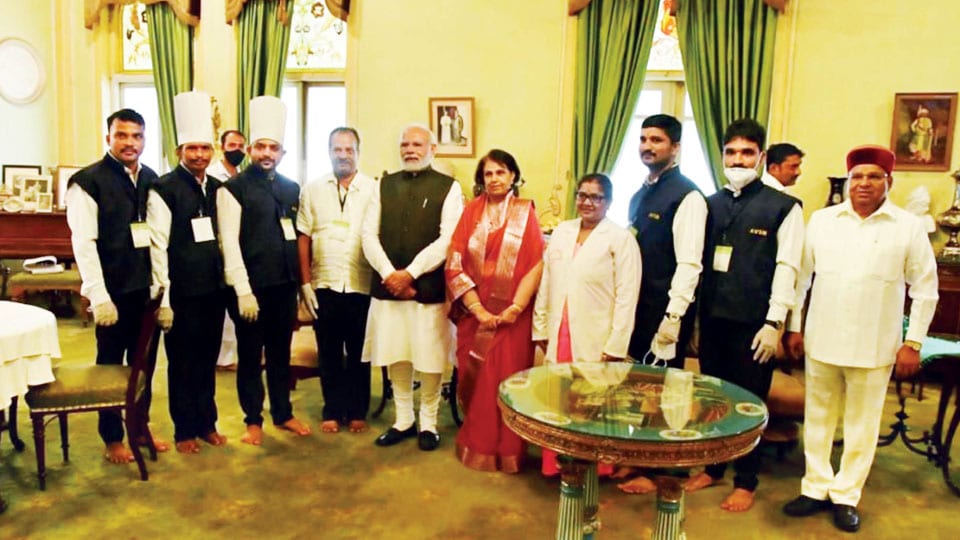 Mysore/Mysuru: An elaborate spread of local and Gujarati cuisine arranged for breakfast at the Mysore Palace on June 21 impressed Prime Minister Narendra Modi and he complimented the chefs for their culinary skills.

After performing Yoga with thousands of people at the Palace, Modi later headed to inaugurate the ‘Innovative Digital Yoga Exhibition’ at Dasara Exhibition Grounds. He drove back to the Mysore Palace for breakfast prepared for him by A.V.S. Nagaraj, a reputed caterer from Bengaluru. Modi was accompanied by Governor Thaawarchand Gehlot and Chief Minister Basavaraj Bommai.

Speaking to Star of Mysore this morning, Nagaraj, who owns ‘A.V.S. Nagaraj Cooking Contractors’ at Gandhi Bazaar in Bengaluru, said that Pramoda Devi Wadiyar had requested him to prepare traditional dishes of Mysuru and Gujarat (in case the PM prefers them). “We came to the Palace on June 20, planned and prepared the menu,” he said.

“It was a unique honour for us to prepare breakfast for the Prime Minister and he complimented me and my team for the tasty spread, especially the local Mysuru dishes. He spoke to me in Hindi and I could understand only a few words. Pramoda Devi Wadiyar told Modi that I have been in the profession for over 45 years. The PM later met the breakfast team and posed for a photograph,” he said proudly.

Nagaraj is known to the royal family for decades and he had prepared food during the marriage of Yaduveer Krishnadatta Chamaraja Wadiyar and Trishikha Kumari, it is learnt.