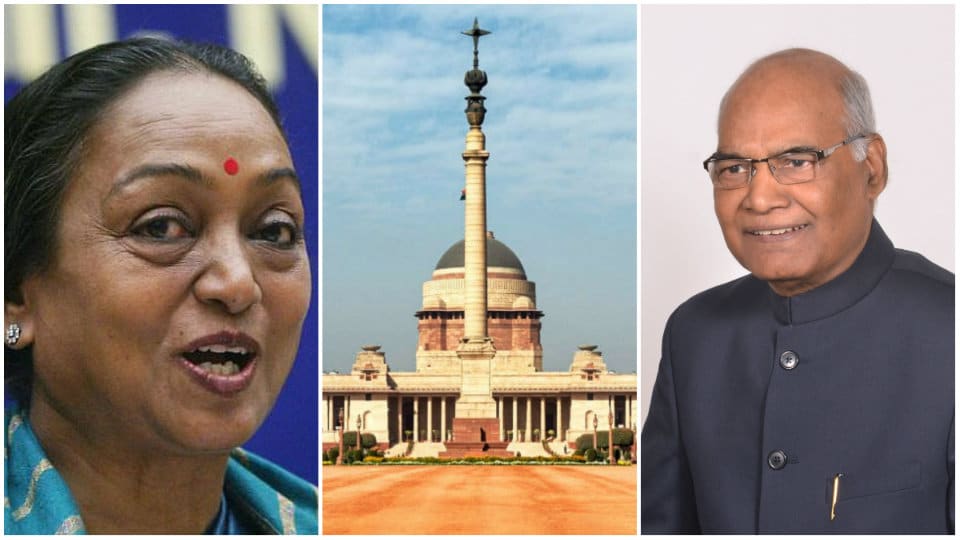 New Delhi: Polling began in the Parliament and the State Assemblies to elect the 14th President of India, this morning. Among the first to cast the votes was Prime Minister Narendra Modi.

As many as 32 Polling Stations, one in the Parliament and 31 in State Assemblies have been created for voting which began at 10 am and was to conclude at 5 pm throughout the country.

Ruling NDA candidate Ram Nath Kovind and joint Opposition candidate Meira Kumar, both Dalits, are pitted against each other in the election.

The President is chosen by an electoral college comprising all the MPs and MLAs in the country, with weighted votes apportioned. As many as 233 elected members of the Rajya Sabha, 543 members from the Lok Sabha and 4,120 MLAs from the State Assemblies comprise the electors.

At Bengaluru: The polling was also underway at Room No. 106 of Vidhana Soudha. Among the first MLAs to vote was BJP MLA C.T. Ravi. Of the total 224 MLAs, 50 percent of them had voted by 12.30 pm. Chief Minister Siddharamaiah, who conducted the Congress Legislature Party (CLP) meeting prior to the commencement of voting, cast his vote along with party MLAs.

Sources said that Siddharamaiah also expressed his anger over JD(S) rebel MLA Cheluvarayaswamy for having gone out of country during the Presidential election. Other JD(S) rebel MLAs headed by Zameer Ahmed Khan cast their votes for the candidates supported by UPA.

Earlier, all the three major political parties in the State — Congress, BJP and JD(S) — issued whips to the party MLAs asking them to cast their votes for the candidates supported by their parties. While the Congress and JD(S) have extended their support to former LS Speaker Meira Kumar, the BJP has been campaigning for NDA candidate Ram Nath Kovind, who is also the former Governor of Bihar. 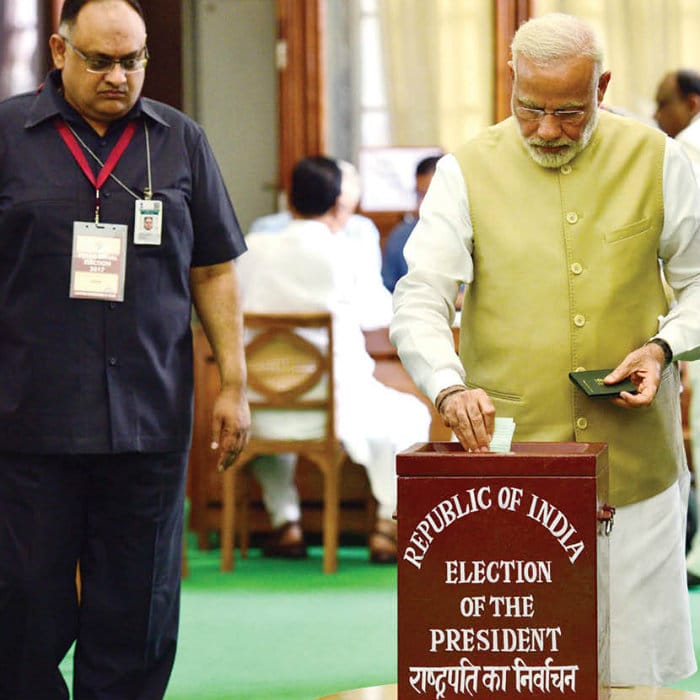 Prime Minister Narendra Modi casting his vote at the Parliament in New Delhi, this morning.

With the JD(S) rebel MLAs, who were suspended from JD(S), casting their votes for Meira Kumar, their vote is expected to be considered valid as JD(S) has extended its support to the  UPA candidate.

The total strength of the electoral college is 10,98,903 votes. A candidate will need 50 percent-plus votes, which is around 5,49,452 votes, to be elected as the next President of  Republic of India.

The counting of votes will take place on July 20 in Delhi. President Pranab Mukherjee will be demitting office on July 25 as his term comes to an end.

Meanwhile, the Election Commission of India (ECI) has notified election to the post of Vice-President on Aug. 5. Gopalkrishna Gandhi, the joint Opposition candidate for the post, will file his nomination papers tomorrow. The ruling NDA is yet to decide on its candidate. Sources said that BJP will decide on its candidate during its Parliamentary Board meeting scheduled this evening.

According to sources, either Union Urban Development Minister M. Venkaiah Naidu or Karnataka Legislative Council Chairman D.H. Shanakara Murthy will be the NDA candidate for the Vice-President’s post.

The ECI has come up with new initiatives for the Presidential polls. This time unique serial numbered special pens of violet ink are being supplied by the Election Commission so as to ensure that only instrument supplied by the poll watchdog is used for marking the ballot. 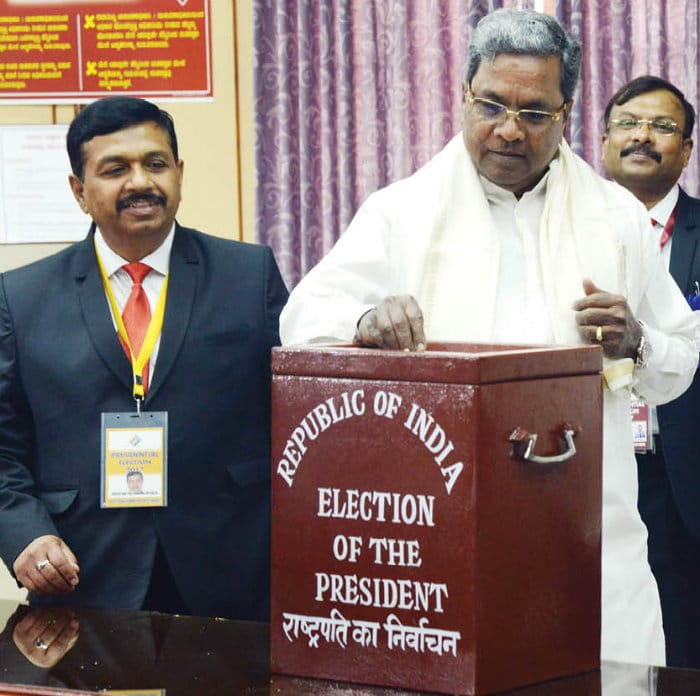 Chief Minister Siddharamaiah casting his vote at Room No. 106 at Vidhana Soudha in Bengaluru.

In another first, special posters were prepared for do’s and dont’s so as to ensure a peaceful poll session, use of only ECI pen, maintenance of secrecy and non-issuance of whip etc.

The ballot paper was in two colours — Green colour ballot for MPs and Pink colour for MLAs and two columns — the first column had the candidates’ names and second to mark preferences by electors.

The ballot paper was in English and Hindi for MPs and in official languages of the State and English for the State Assemblies.

A total of 33 observers were appointed by the ECI to oversee conduct of elections — Two in Parliament and one each in other 31 polling stations situated in the Legislative Assemblies.

Madhya Pradesh BJP MLA Narottam Mishra was disqualified from voting in the Presidential poll. The ECI disqualified Mishra for three years over paid news charges, holding him guilty of not giving a true account of expenses incurred during the   2008 Assembly Polls.