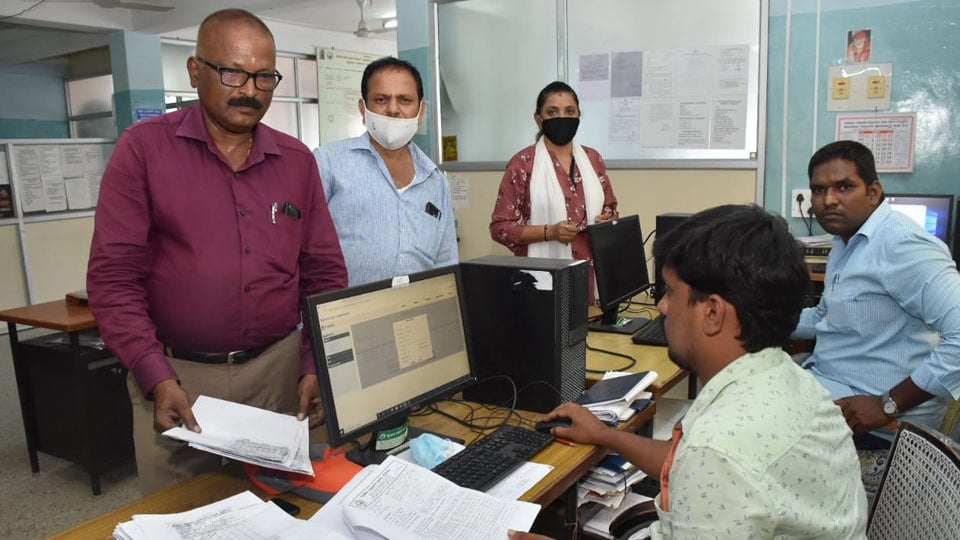 Mysore/Mysuru: With an intention to provide relief to COVID-hit revenues of Mysureans and to encourage speedy tax payments, the State Government has extended the 5 percent rebate period for payment of annual Property Tax at the Mysuru City Corporation (MCC) till July 31. The earlier deadline was May 31 and this extension has been given to facilitate smooth tax collection and to enable residents to find resources to pay tax.

However, many residents are complaining that though they have submitted last year’s tax paid receipt and the copies of SAS documents 15 days back for the officials to generate PID (Property Identification Number), there has been no response from the MCC.

As a first step towards online tax payment, the MCC began the process of collecting taxes through PID since May 1, 2020. The system works like this: Each property owner or a tax-payer must produce the receipt of previous tax payments (SAS forms) and the already mapped and allotted PID will be given to them. After the receipts and SAS forms are submitted to the respective MCC Zonal offices, the officer, following the verification of the documents, collects the phone number of the tax-payer and tells the tax-payer that he/she will be called to pay the tax at a given date and time.

Waiting for the response

The benefit of the PID is that when the number is entered in the system, all the property details including the tax due displays on the screen. It is verified first at the cash counters and a printout is given to the tax-payer so that the tax due can be paid accordingly. But people are complaining that they have already submitted the old receipts and SAS forms but are yet to hear from the respective official.

To smoothen the process, each Zonal Office has a notice board that carries information to the tax-payers and a list of mobile numbers of officers concerned are displayed. “I have submitted my last year’s receipts 15 days back but I am yet to receive a call from the MCC,” Ramaiah, a resident of J.P. Nagar told ‘Star of Mysore.’

“Though we have submitted the forms as soon as the MCC started collecting them and if they fail to generate the PID or SAS forms on time and if the rebate period is over, honest tax-payers will be denied the legitimate rebate,” he added.

The same is the case with Narayan, a resident of Janata Nagar who has submitted the receipts and has given his phone number to Zonal Office at Sharadadevinagar. “When we call up the officials for follow-up, the reply is curt and our call is disconnected. Then why did the MCC list the phone numbers in the notice board if the officials are behaving rude,” asked Ramaiah.

“I was advised that the MCC Zonal Office staff would call me when the PID is ready. Even after two weeks I am yet to receive any call.  MCC should have asked the developers of the software to send an SMS to the tax-payer as soon as the PID was generated. It should also have generated a bank challan for payment of the tax,” said H.G. Subramanya, another resident.

PID will ensure that every property has a unique number associated with it and it will help track tax payment and thereby help MCC get the revenue due to it. “What is the point in this delay? Is the MCC still lagging behind in implementation of online tax payment though it has often made tall claims of immediate implementation,” questioned Radha Venkatesh, a resident of Yadavagiri.

Also, the State Government has said that payment of property tax with penalty for late payment will now be taken into consideration effective from Nov. 1, 2020 instead of the earlier July 1, 2020. By July end, the MCC is expecting a tax collection of Rs. 100 crore as the tax-payer is encouraged by the rebate extension.

MCC revenue wing sources said that in the last 10 days, Rs. 6.5 crore worth tax money has been remitted at all the 9 Zones. “Now, the per day collection stands at Rs. 50 lakh to Rs. 60 lakh. But last year, during March and April, the per day collection stood at Rs. 2.5 crore. We are confident that more and more tax-payers will make use of the rebate,” officials said. There are over 1.85 lakh tax-payers within the MCC limits and the civic body has set a target of collecting Rs. 176 crore in 2020-2021.