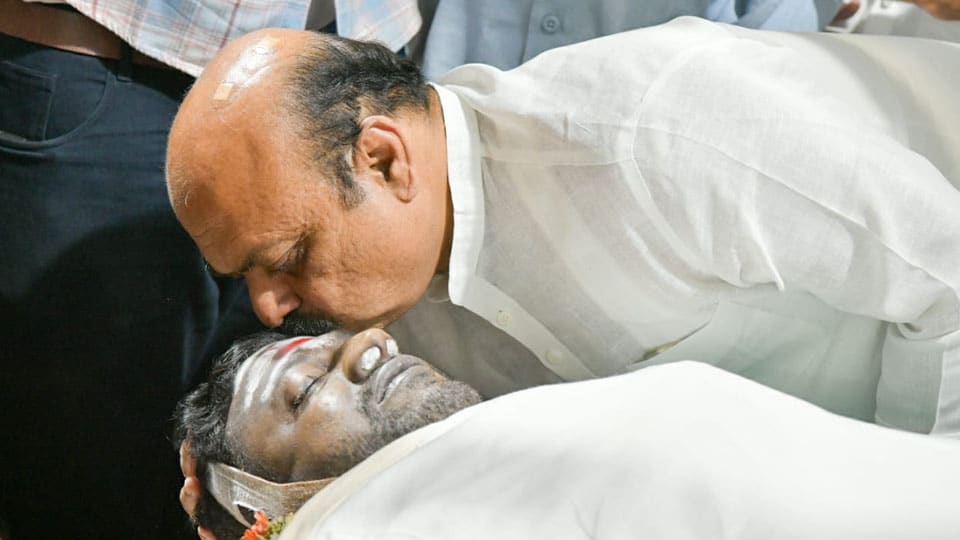 Bengaluru: Kannada actor Puneeth Rajkumar, who died on Oct. 29, was buried with State honours next to his parents Dr. Rajkumar and Parvathamma Rajkumar at Sree Kanteerava Studios this morning in the presence of family, friends, colleagues from the film industry and dignitaries. The sombre ceremony concluded by 8 am.

Puneeth, youngest of the five children of thespian and matinee idol Dr. Rajkumar, passed away at the age of 46, after suffering a cardiac arrest. He was referred to as ‘Power Star’ and ‘Appu’ by his fans. Vinay Rajkumar, the elder son of Raghavendra Rajkumar, conducted the rituals as per the family’s traditions for his uncle’s final journey.

Even though fans of Appu were not allowed at the funeral site, they gathered outside and chanted ‘Appu Amara’ (Appu is immortal) in unison.

His mortal remains were brought in a procession from Kanteerava Stadium, which began around 5 am and reached Kanteerava Studios. Karnataka Police offered a 21-gun salute before Chief Minister Basavaraj Bommai handed over the National Flag, which had been wrapped around the mortal remains of Puneeth Rajkumar, to his wife Ashwini Revanth, in presence of Puneeth’s daughters Dhruti and Vanditha.

The wife and daughters were seen holding on to each other and crying. This sight left many emotional and teary-eyed for their loss.

Shivarajkumar and Raghavendra Rajkumar broke down and wept uncontrollably as their brother was buried.

Fans will be allowed to the samadhi only after ‘halu-tuppa’ ceremony (offering of milk and ghee to the grave) on Tuesday.

Puneeth Rajkumar’s untimely demise sent shock-waves across the country, with tributes pouring in from all quarters.

Puneeth’s fans remembered the late actor as “one of the kindest and noblest” film stars.

People gathered on terraces of the buildings around Sree Kanteerava Studios and climbed trees around it to catch a glimpse of the late actor.

The family members thanked the State Government, Police and fans for the well-organised funeral.  Even in the early hours of the day, the funeral procession was greeted by thousands of fans and well-wishers who paid their last respects.

Raghavendra Rajkumar stated that it was an appropriate decision by the Government to not allow the procession of the fans. “We have seen violence and damages to public properties at the time of my father’s funeral. We didn’t want this to happen. No one should get hurt,” he said.

As many as 10,000 Police personnel were deputed to maintain law and order in Bengaluru city after Puneeth’s death.

About 10 lakh people visited and paid their last respects from Friday noon till the early hours of today, the Police said.