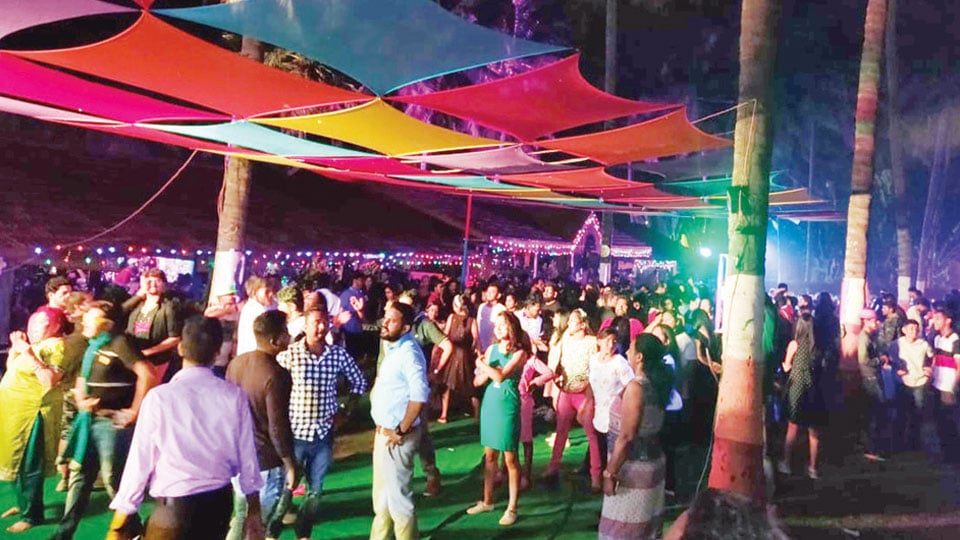 Mysuru: Mysuru city will miss the usual Christmas and New Year Eve celebrations in clubs, pubs and restaurants among other places with the State Government banning special DJ dance and parties till Jan. 2, 2021.

However, there will be no restrictions on Xmas prayers tonight. All parties at clubs, pubs and restaurants must end at 11 pm from today and the same guidelines will be in force till the next day after New Year.

As with most festivals this year, Christmas too will be a low-key affair. “Midnight Christmas mass on 24th night shall be permitted as per guidelines issued on Dec. 17. Celebration of Christmas and New Year festivities shall be as per the guidelines,” the Government order stated.

Speaking to Star of Mysore, Deputy Commissioner of Police (Law and Order) Dr. A.N. Prakash Gowda said that the Government guidelines will strictly be implemented. “We have no objection to Christmas midnight mass but the guidelines must be followed. Organisers and supervisors at Churches must ensure that a large number of people don’t gather at a time and social distance is maintained. Also people should not indulge in handshakes or hugging during the festivities,” he said.

City Police teams will be present in full force on roads, in front of churches and other thoroughfares and as of now, the Reserve Police teams have not been deployed. “As the Government has stated in its order, hotels, liquor shops, bars, restaurants and pubs should abide by the night curfew failing which their licences will be cancelled. We will coordinate with the Excise Department officials and field officers in ensuring that liquor shops and wine stores will close within the deadline,” the DCP added.

Barricades will be laid on the main roads and other connecting routes to prevent unnecessary movements. Essential services will be allowed and there will be patrolling by Garuda and PCR vehicles. Police teams will go easy on the people who return from Christmas Eve service.

Gathering of people at public places and roads for celebrations stands prohibited, but normal routine activities can be carried out at these places. In the guidelines, the Police and Deputy Commissioners have been given the authority to impose more restrictions at certain specific roads or places in their jurisdiction, Dr. Prakash Gowda added.