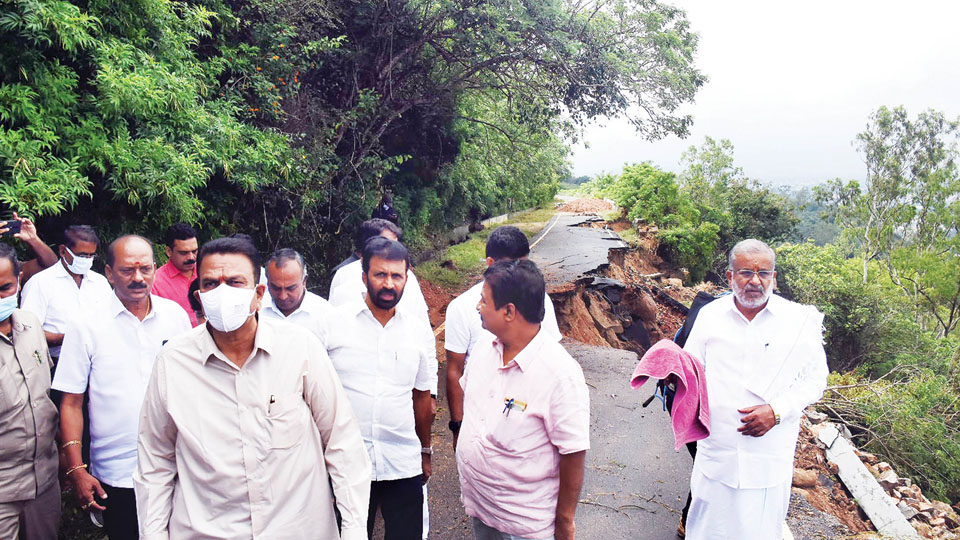 Mysore/Mysuru: Exactly a week after two scientists from Geotechnical Engineering Department under Civil Engineering of Indian Institute of Science (IISc.) visited the Chamundi Hill for the second time to assess the damage, Public Works Department (PWD) Minister C.C. Patil visited the Hill this afternoon and inspected the damage caused by incessant rain and landslides. PWD is seeking suggestions from IISc. on repairs and restorations and the team has collected soil and rock samples for analysis. Before visiting the Hill, Patil visited the K.R. Mill area where heavy rains had wreaked havoc.

Inspecting the damages at the Chamundi Hill, Patil said that the expenses, project details and repair works estimate cannot be disclosed as there is a code of conduct for MLC election now. “We are in touch with the IISc. scientists and they will use a new and reliable technology to build a retaining wall to prevent such incidents in the future,” he said.

“PWD officials have told me that the landslide has occurred due to soil saturation and rise in water table. Due to weak soil, the forest stones have fallen down, taking along the retaining wall. In the absence of a retaining wall below, the mud has easily slid,” the Minister explained.

A team of geologists too will visit the Hill to analyse the entire area and submit a detailed report to the Government, he added. “Scientists are already analysing the soil and earth samples and will come up with a plan. Funds are not a problem and the Government has taken the landslide seriously. A comprehensive plan for Chamundi Hill damage restoration and a rain damage report for Mysuru city is ready and will be implemented in the coming days,” Patil assured.

A portion of Chamundi Hill — between View Point and Nandi Statue — has collapsed thrice, increasing the risk to motorists and villagers up the Hill. While the first landslide occurred on Oct. 20, 2021 near the spot where a massive slip had occurred in 2019, On Oct. 31, 80 percent of the road was shrunk on Oct. 31 in the second slide and one more landslide occurred on Nov. 4, just 10 metres away from Oct. 20 landslide area.