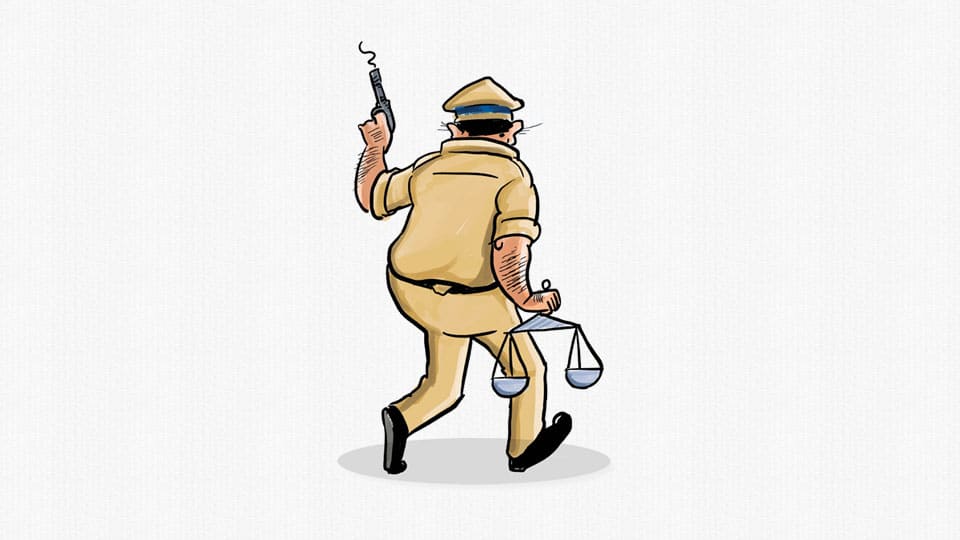 Vikas Dubey, the  “Kanpur wala” gangster, who killed eight Policemen during a raid and escaped, was caught on a Thursday and shot dead on a Friday. Justice was served ‘Dabangg’ style. Has reel Police become real Police now?

“Encounters” or “extra judicial killings” which were widely practiced by the Punjab Police against violent supporters of Khalistan and by Maharashtra Police to deal with the Mumbai underworld has now become “acceptable” practice in many States.

Quick justice may have become the choice of law deliver for many Police officers because the wheels of justice grind slowly and also procuring and securing  “undeniable evidence” is hard work and a thankless job.

The Police, after grabbing an accused, have to start building the case, collecting evidence, secure it, keep going to courts to depose before the Judge and keep taking the accused along month after month to the court.

During this time, the accused person’s political patron, lawyer and even some Police officers may weaken the case. In the end, after all the effort of the Police officer, the accused could go scot-free, like Dubey did after killing a man inside a Police Station. This person could then go on to become a neta who could decide this arresting officer’s future…so why give a chance.

The observation of Justice A.N. Mulla of the Allahabad High Court that  “Policemen in general, barring a few, seem to have come to the conclusion that crime cannot be investigated and security cannot be preserved by following the law, and it can only be achieved by breaking or circumventing the law” now rings true.

This observation was on full display when Telangana Police shot dead four rapists last year. They delivered a medieval style justice in modern times and people cheered because they have lost faith in the Indian justice system.  When the most disturbing rape and murder of Nirbhaya takes seven years, why will people not celebrate quick-gun justice?

The public seems to have simply accepted the new quick delivery model saying, “They were evil men. Police did what courts would have taken years to do.” It is this attitude that made “encounter specialists” heroes in the eyes of the public in the 1990s.

The most famous among encounter specialists were Pradeep Sharma and Daya Nayak, both from Mumbai Police. In fact, Pradeep Sharma in an interview for Time magazine said, “Criminals are filth and I’m the cleaner.” This is ‘God complex’ flowing from the power of his gun and license to legally kill.  But that said the “encounter squad” did mange to bring down crime over a period of seven years after which they were shut down.

Even our sleepy Mysuru had a similar squad, it was called the “Anti-Rowdy Squad (ARS)”  In the early 1990s rowdies were becoming a menace as Police turned a blind eye. Then in 1993 two duty Constables were attacked near Gayathri theatre on Chamaraja Double Road. Immediately the then Police Commissioner Kasturirangan set up an, ‘Anti-Rowdy Squad’ headed by Inspector K.S. Thammaiah. Soon the cleansing began with rowdy-sheeter Lakshman, aka ‘Chimpanzee’ being killed in an encounter when he tried to “escape” from Police custody in old Santhepet area.

ARS had struck fear in the hearts of rowdies and aspiring rowdies alike. In a few years, rowdies mellowed down and moved to real estate and politics and the Anti-Rowdy Squad was moved into City Crime Branch where it remains dormant.

But this trend of quick justice doesn’t bode well for a civil society or democracy. Soon this approval of the public for quick justice can be misused to close cases quickly or cover up cases. And Dubey killing may very well prove to be one.

This sudden story of the jeep toppling, Dubey escaping with a gun, then being shot dead proves that the Police need an Anurag Kashyap movie script, because what they have now is a Rohit Shetty movie script, bereft of logic and full of holes in the story.

Even better, may be it is time the Police wrote a new script, one where they severely punish their own who sell themselves. Dubey had time to prepare and kill Police because he got information of the raid from the Police.

This story of “enemy within” plays out across many Police Departments in the country.

Many may remember how a Police Sub-Inspector and four Police Constables took a bribe of Rs. 7 lakh and let RDX-laden trucks into Mumbai which went on to kill 317 people and severely injuring 1,400.

Closer home we have the example of Veerapan. The dreaded poacher was first arrested in 1965 by Forest Rangers but disappeared from a Police lock up! Then he again surfaced in Bangalore in 1986 to purchase ammunition when a chance encounter led to his arrest. He was handed over to the Superintendent of Police, Forest Cell, in Mysore. Again he escaped ! He had a magic spell…. ‘bribe.’ Because after his “escape act” in 1986 a Police inquiry indicted senior officials guarding him for taking bribes and letting him escape.

These officers may have been indicted but what was the price others had to pay? Veerapan went on to kill 138 people, including 32 Police officers and 10 forest officials. Two of them were the beloved sons of Mysore —  SP  T. Harikrishna and  SI Shakeel Ahmed.

The officers who took the bribe should have been sentenced to death or life in prison for leaving a trail of young widows and fatherless children. While the Government talks of electoral reform and judicial reform, may be Police reform is more urgent. Because a Policeman who does not care to protect his own colleagues will never protect us, the public?

For now, if anything, all that the UP Police have done is stopped Dubey from entering politics, because sooner or later he would have entered the Vidhan Sabha in Lucknow, if not the Lok Sabha in Delhi. Just one less elected criminal…unfortunately, until the next one rises.