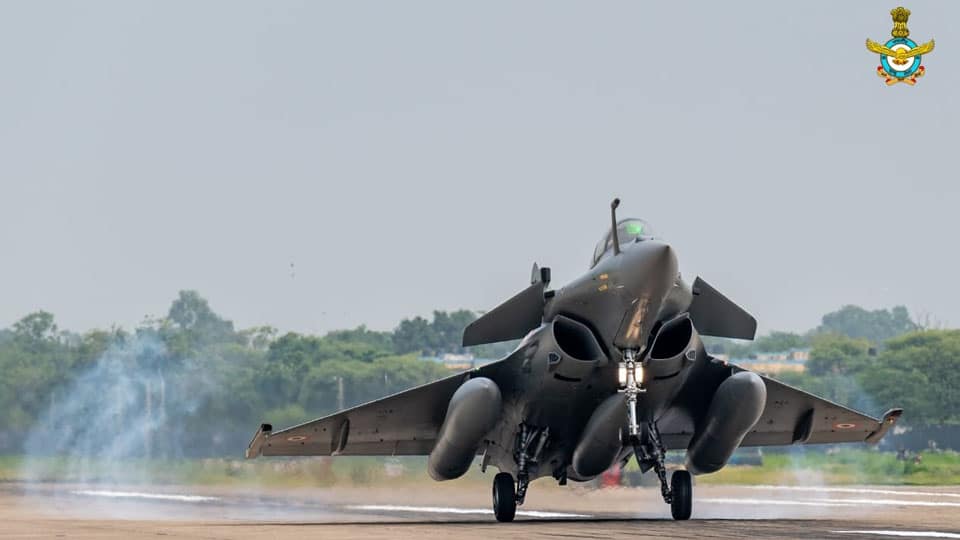 Ambala (Haryana): The five Rafale fighter jets that landed in Ambala Air Base last afternoon will resurrect the Number 17 Golden Arrows squadron of the Indian Air Force. It will take the IAF’s squadron strength to 31. When all the 36 Rafale jets are delivered by 2022, it will take it to 32 squadrons, still well below the 42 squadrons of the sanctioned strength.

The ability to strike air-to-air targets from up to 150 km away and safely hit land targets 300 km within enemy territory make India’s Rafales some of the deadliest fighter jets flying in the world. Known for air-superiority and precision strikes, the French-made Rafales are India’s first major acquisition of fighter planes in 23 years after the Sukhoi jets were imported from Russia.

The first five Rafales bought from France in a multi-billion-dollar deal landed in the country on Wednesday and Defence Minister Rajnath Singh used their arrival to launch a veiled warning to neighbouring China over territorial tensions. “If it is anyone who should be worried about or critical about this new capability of the Indian Air Force, it should be those who want to threaten our territorial integrity,” Singh said.

The aircraft are capable of carrying a range of potent weapons. European missile maker MBDA’s Meteor beyond visual range air-to-air missile, SCALP cruise missiles and MICA weapons system will be the mainstay of the weapons package of the Rafale jets.

Meteor is the next generation of BVR air-to-air missile (BVRAAM) designed to revolutionise air-to-air combat. The weapon has been developed by MBDA to combat common threats facing the UK, Germany, Italy, France, Spain and Sweden. The Meteor is powered by a unique rocket-ramjet motor that gives it far more engine power for much longer than any other missile, experts say.

The Meteor missile can target enemy aircraft from 150 km away. It can destroy enemy aircraft before they actually even get close to the Indian aircraft. If India had Rafales during the aerial encounter with Pakistan last year, the assumption is that many Pakistani F-16s would have been destroyed.

Rafales are also equipped to carry SCALP cruise missiles that can hit targets 300 km away. It means that an Indian Air Force Rafale taking off from Ambala, will be able to launch one of these weapons from well within Indian airspace to hit a target deep inside China.

The third weapon system is the MICA missile system. The MICA is a very versatile air-to-air missile. It comes with a radar seeker. It also comes with an infrared seeker and the reason which makes it very advanced is that it can be fired for the short-range to your long-range as well right up to a 100 km.

Hammer (Highly Agile Modular Munition Extended Range) is a precision-guided missile developed by French defence major Safran. The missile was originally designed and manufactured for the French Air Force and Navy. Apart from weapons, Rafales also fly with SPECTRA — widely considered the world’s most advanced fighter-based electronic warfare suite, a system which is the cornerstone of the Rafale’s survivability against a host of the latest threats.

SPECTRA is designed to detect threats and provides a multi-spectral threat warning capability against hostile radars, missiles and lasers.  By detecting threats at long-range, SPECTRA allows the pilot to instantly select the best suited defensive measures combining radar jamming of ground and airborne radars and the deployment of infrared or radar decoying flares and chaff.